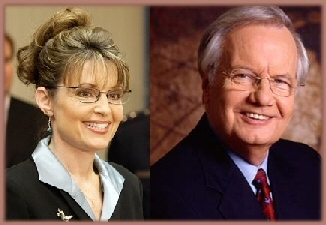 On Friday, the anniversary of John F. Kennedy's 1960 speech and Q-and-A session addressing concerns about his religion, I called upon Sarah Palin to have a similar open forum in which she can be questioned about what appear to be her potentially dangerous religious views.

In his interviews with Gov. Palin last week, Charlie Gibson touched ever-so-slightly on those religious views, but did not follow up on her previous indications that she considers the "War on Terror" a holy war or ask the truly critical questions, such as whether she believes in "the Rapture," thinks (as her former pastor said while she nodded in agreement) the "Last Days" are coming soon and Alaska will be a refuge for those fleeing the Lower 48, that America is a "Christian Nation," and so on. People in the church in which Ms. Palin grew up and still visits speak in tongues. What are her views on this practice?

Such questions are entirely appropriate. Citizens are free to believe whatever they want, but in the case of those who offer themselves for high public office, voters have a right--a need--to know about beliefs that could impact public policy decisions.

Sarah Palin's second interview is scheduled for Tuesday with Sean Hannity of Fox News. We can hope he will surprise everyone and attempt to act as if Fox were a real news organization by asking her the questions that need to be asked. But who's going to hold her or his breath on that one?

If only Tim Russert were still with us . . .

But there is an answer. Bill Moyers, a deeply religious Christian who attempts to be a genuine Jesus follower, should interview Gov. Plain on her religious views. It could either be done as an individual event or as a part of a series of four interviews on religion that Moyers would do with each of the major party candidates for national office.

John McCain and the Republican campaign surely don't want to let anyone like Bill Moyers close enough to Sarah Palin to ask her any questions about her beliefs and how they might impact her governmental decisions. But the candidate's handlers should at least be put in the position of having to give reasons why they won't allow it, and sufficient public pressure might force the campaign to agree to such an interview.

Let's start the drumbeat for a Palin interview by Bill Moyers and keep it going until the McCain-Palin campaign responds.