In the neighborhood where I live in Rhode Island, Donald Trump is a hero. It is a solid, mostly white, community of working-class people.

They are fiercely patriotic, as the many veterans memorials that dot the landscape testify, as well as the solemnity with which they celebrate Memorial Day.

They are religious. Being mostly of Italian and Portuguese descent, they are practicing Catholics. Plaster Madonnas sit on many lawns.

These people -- these good, hard-working God-fearing Americans -- vote Democratic in a heavily unionized state. There are deep labor roots, and a history of struggle between the mill owners and the workers in the days when New England was home to the textile trade.

But sharing the small, neat lawns with Madonnas are blue Trump campaign signs. 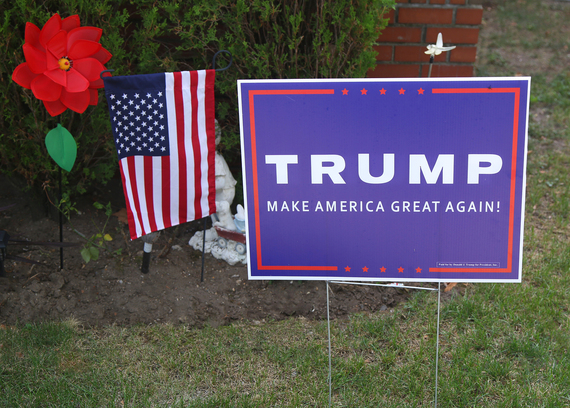 These people are a near mirror-image of the working people in the north of England who voted for Britain to the leave the European Union. They are also working class or, as we have abandoned that term, middle-class people who saw their textile industry implode.

In Rhode Island, these exemplary people clearly are falling for the false music of Pied Piper Donald Trump. His wild, anti-trade siren song appeals here, invoking the time when New England was a manufacturing hub and China was place you read about in National Geographic.

Their twins in the blighted north of England followed another piper with another myth: the former mayor of London and showman, Boris Johnson. He preached freedom from Europe: a halcyon dream of Britain free of entangling regulation from the European administrative capital, Brussels.

Now Johnson's bluff has been called, and it is dawning on the good people of the north of England (think of it as England's Rust Belt) that their well-being -- such as it has been -- has been largely as a result of the European Union. The North, so much less prosperous than the South, where London holds hegemony, depends on European Union investments and grants. Now free of Europe, they are free to be poor.

In Rhode Island, after years in the post-industrial doldrums, a zephyr of new hope is just rising, and it has attracted the General Electric Company's digital division. It will sit alongside another global mainstay of the U.S. economy, Textron, headquartered in Rhode Island.

So even as Rhode Island is beginning a new chapter, its citizens are flirting with drinking the Kool-Aid being peddled by Trump.

Johnson and others, mostly Conservatives, peddled the myth that Britain was being hogtied by Europe and was yearning to be free and trade with the world - a sharp contrast to the Fortress America Trump is peddling, but appealing to workers who, on both sides of the Atlantic, want a fairer shake.

Johnson says: Europe has hindered us and is undermining our national sovereignty. Trump says: the world is stealing from us. Both are political myths: dangerous, toxic myths. Both share a common lack of coherence, as is now so evident in Britain.

The sin of Johnson against the British people is that the campaign was based on lies, and there was no plan for how to proceed after victory: a well-known political trap (see G. W. Bush and Iraq).

No one I know believes that after Trump presumably gets the Republican nomination in Cleveland he will go on to win. But neither did I know anyone in Britain who thought the country would fall for the wiles of devious leaders who play on patriotism and frustration for their own ends: glorification and power.

The blue Trump signs outside the modest but proud houses on my street may not get Trump elected, but -- and here is the danger -- they may draw his putative opponent, Hillary Clinton, towards the same trade poison that he is advocating. She already has backpedaled shamelessly on the Trans-Pacific Partnership, which she helped negotiate, and who knows what anti-trade deals she will strike with the unions?

When politics is informed by myth not policy, democracies are in danger of hurting themselves. We do not need a special relationship with Britain founded on mutual folly. -- For InsideSources