It doesn't matter. It's a small, totally irrelevant piece of land. Give the separatists a measure of autonomy. Russia has already lost most of Eastern Europe, and in the last six months, they lost the loyalty of most of the Ukraine. There are few pockets and slivers on the Russian boarder that are still loyal to Russia. Give these small bits of land a decentralized status. No doubt, within a few years, they will rethink the wisdom of their decision. To Vladimir Putin's dismay, most of the rest of Eastern Europe wants to be allied with the European Union and the West. In the last two decades, they have seen the Baltics, Poland and East Germany thrive economically, while Ukraine has stagnated. Helping Ukraine's central government subdue the rebels is not worth a war of world involvement. The pro-Russian rebels want to be free of Ukrainian heavy handedness; they don't want Kiev to appoint their governors and mayors; they don't want to pay taxes without proper representation; and they want to be able to speak the Russian language, which they have spoken for many decades, although the central government recently tried to ban it. 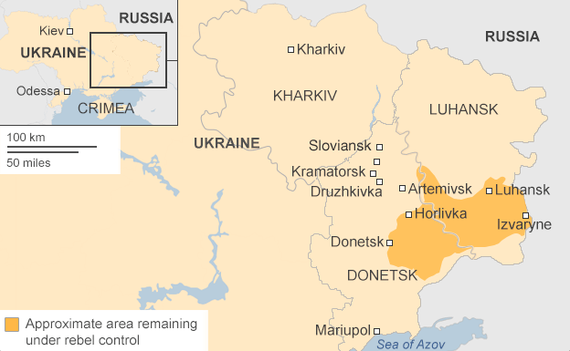 Defusing the crisis situation is simple. If we let it, the solution will evolve slowly. Something like the Canadian autonomy of Quebec or the semi-autonomous, Russian-populated regions in Georgia, South Ossetia and Abkhazia, which are peopled with Georgian citizens who have Russian passports -- but are still technically residing in the country of Georgia. It's working well enough. Indeed, the current continued violence against civilians in the Ukraine is completely attributed to the Kiev government. Western Ukrainians are the ones invading the east, sending troops, fighters jets, unguided Grad rockets and bombers over Eastern Ukraine's populated areas and cities, killing innocent civilians, according to Human Rights Watch. Ukraine is being supported and encouraged by the U.S. policy and the Western media, which have led to the violent war conditions that led to the unfortunate shoot-down of a commercial jetliner with 298 lives lost Ironically, Putin and the separatists have been calling for an immediate cease fire, talks and negotiations. The Ukrainian central government has been resisting. It wants to crush the rebels and has killed some 1,200 civilians. Little of this has been much reported in the Western media, which has been fanning the flames for NATO intervention and possible war. Of late, the Republicans and much of the American media, including The New York Times and the Washington Post have been beating the drums of war for increased U.S. involvement. See articles by Roger Cohen and Bernard Henri-Levy in The New York Times. America seemed panicked by the idea of repeating Neville Chamberlain's pre-World War II mistakes with the creation of many mini Russian Sudetenlands. If the saber-rattling continues, things might not turn out the way we want them. The long-term repercussions are unknowable and scary. Ukrainian rebels want peace. They want to be left alone right now. They want new balance -- a large degree of autonomy. They want to be able to speak Russian. They want to trade with Russia, but, ironically, they don't want to join Russia. This conflict developed, of course, because the U.S helped engineer a coup against a democratically elected, albeit, corrupt government -- after the former elected president rejected a trade pact with the EU and negotiated an economic alliance with Russia. The U.S. helped the Western, pro-EU faction install a puppet regime rule with elections that were boycotted by much of the country. It's not that Putin hasn't meddled also -- with Russian soldiers and weapons. He's been growing increasingly upset, and somewhat desperate, because NATO, a U.S. military alliance historically directed against Russia, is closing in on his borders. The West and NATO actively courted and lured away 12 former Warsaw Pact nations and republics, pro-Russian countries that formerly buffered the Soviet Union: Albania, Bulgaria, Croatia, Czech Republic, Estonia, Hungary, Latvia, Lithuania, Poland, Romania, Slovakia, and Slovenia. Russia has its own version of the Monroe Doctrine and is not going to give up hegemony over any more neighboring Russian ethnic groups. The U.S. would certainly not tolerate a hostile country on our borders. Witness what happened to Cuba when it formed an alliance with the Soviet Union. The CIA tried to poison Fidel Castro many times, supported an invasion and instituted a 56-year boycott to destabilize the country. CIA spies and paid agents encouraged and funded terrorism, bombings, floods and even seeded clouds to destabilize the county's agriculture. The crash of MH17 was a tragedy. Nobody thinks it was anything other than a horrible mistake. It is unfortunate that the U.S. is trying to use these tragic deaths for political purposes, which may lead to more violence and more civilian deaths. In 1988, when the U.S. Navy blew up civilian airliner flight 655 in a war zone, killing 290 innocent people, only the Iranians tried to politicize the situation. At first, U.S. officials told various lies to cover up the reality. A government review, released eight weeks after the accident, cast blame on the pilot of the commercial airliner. But the U.S. never apologized for the atrocity, and the captain of the ship that launched the missiles, The Vincennes, was given a medal: the Legion of Merit. Eight years later, after being sued in a World Court, the U.S. government did compensate the victims' families and even then expressed "deep regret," but didn't offer an apology. In October of 2001, the Ukrainian military fired a missile during a training episode into Siberian Airlines flight 1812 bound from Tel Aviv with many Israeli youths aboard, killing all 78. After initial denials, Ukraine admitted their mistake and banned the testing of Buk, S-300 and similar missile systems for a period of seven years following this incident. If Putin knows who was responsible for the crash, he should say so immediately, but, for now, he is acting like most other countries that have shot down civilian airliners by mistake. It's not like this has never happened before. But, the U.S. government and media have been trying to exploit this cloudy, obvious tragedy, and needless deaths, for selfish political purposes -- using it as an excuse to demand stronger trade sanctions on Russia. Most of the Europeans see the plane crash for what it is: a tragedy. And they have been reluctant about increased sanctions. The key question now is: how important is Ukraine's regional crisis -- a civil war -- to the U.S. worldwide geopolitical interests? The answer is: not very. We should look carefully at what is at stake from a global perspective. The U.S. and the West need Russia's cooperation on a number of large-scale macro issues, including Islamic terrorism, nuclear disarmament, containing Chinese expansionism and the war in Syria.

The world today is a dangerous tinderbox. With the political and economic advances the EU and the West have already made on the Russian sphere of influence, Russia feels it is being slowly put into a cage -- and humiliated. Putin doesn't like it and has the support of his people with a 68 percent favorable rating. Barack Obama's leadership is only supported by 43 percent of Americans.

"The long-term [Western] goal -- though no one talks about it -- is political change inside Russia, regime change, if you will," said Fyodor Lukyanov, head of a Kremlin foreign-policy advisory panel, on Monday.

"Expecting Putin to back off, or his close friends to persuade him to change tack or else the 'oligarchs' to pressure the Kremlin into beating a retreat betrays a lack of understanding of the gravity of the situation," Dmitry Trenin, director of the Moscow Carnegie Center, wrote Monday.

"It is no longer the struggle for Ukraine but a battle for Russia." It's a perilous path. Do we really want Obama to put all our geopolitical marbles on what is essentially a regional conflict? How does this help, or profit, the American people?