The First Lady, Michelle Obama, a week after joining forces with First Lady Kalsoom Nawaz Sharif of Pakistan on Mrs. Obama's,"Let Girls Learn,"initiative, has now announced an upcoming trip to Qatar and Jordan, to show American support for Syria, and for Qatar and Jordan's large intake of Syrian refugees. The US is a world leader in funding support for Jordan's Syrian refugees. Other countries stepping up in the Syrian effort have included UK, EU, Germany, Saudi Arabia, Qatar and other local leaders in the Middle East. According to Susan Markham, the USAID Senior Coordinator for Gender Equality and Women's Empowerment, USAID invested $458 million across Jordan's education sector between 2002-2014. Specifically in the last five years, USAID has constructed 28 new schools, rehabilitated 65 existing schools, and renovated 550 kindergarten classrooms.

DOES THE FIRST LADY HAVE THE BEST JOB?

The answer is yes. In terms of being in position to make a difference, the First Lady has been an active and vocal voice for female education in the United States and Abroad. It is certainly an issue both the First Lady, her Chief of Staff, and Executive Director for Council on Women and Girls, Tina Tchen, take to heart. Ms. Tchen positively brims with enthusiasm at the great strides Mrs. Obama has made in the area of education for girls. As part of Let Girls Learn, the First Lady will visit Doha, Qatar and Amman, Jordan from November 1-7, 2015. 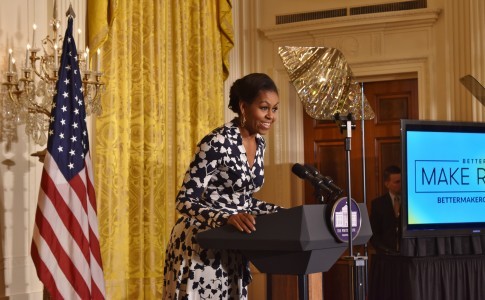