These lines, from a traditional gospel spiritual song, eventually became a civil rights anthem. Our young friends in Afghanistan echo the resolve heard in this song. #Enough! they say, writing the word, in Dari, on the palms of their hands and showing it to cameras, wanting to shout out their desire to let goodness shine by abolishing all wars.

This past summer, collaborating with Wisconsin activists in the "Let It Shine" walk, Voices walkers called for an end to targeted drone assassinations abroad, and racial profiling that kills brown and black people within the U.S

Along the 90 mile route, Brian Terrell quoted mothers speaking to Code Pink, as part of the Mothers Against Police Brutality campaign, who report that surprisingly many of the officers charged with killing their children were veterans of the U.S. wars in Afghanistan and Iraq

Salek Khalid, a friend of Voices, shared "Creating a Hell on Earth: U.S. Drone Strikes Abroad," his own in-depth presentation about the development of drone warfare. Tyler Sheafer, joining us from the Progressive Alliance near Independence, MO, stressed the independence of living simply, off the grid, and consuming crops grown only within a 150 mile radius of one's home. Hosts in Mauston, WI welcomed Joe Kruse to talk about fracking and our collective need to change patterns of energy consumption. 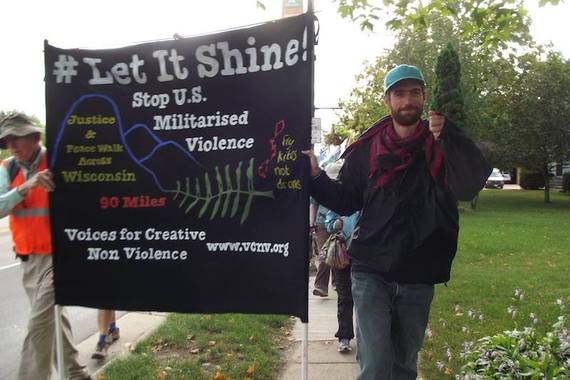 Walkers weren't alone. They walked in solidarity with villagers in Gangjeong, South Korea, who've welcomed many of us to help stop militarization of their beautiful Jeju Island. Seeking inter-island solidarity and recognizing how closely they share the plight of Afghans burdened by the U.S. "Asia Pivot," our friends in Okinawa, Japan will host a walk from the north to the south of the island, protesting construction of a new U.S. military base in Henoko.

Rather than provoke a new cold war, we want to shine light on our common cares and concerns, finding security in extended hands of friendship.