Every year it gets better, as L.A.'s Grove becomes the premiere destination for winter holiday fun. Brilliant pageantry warmed many a heart (an estimated 25,000) as the Grove launched the holiday season earlier this week. There was singing, dancing, philanthropy, fireworks, and Santa Claus looking rather darned happy to be welcomed by the gorgeous high-steppin' Top Hats. Terrific acts ranging from Colbie Caillat and Far East Movement to Michael Bolton with Melanie Fiona and a lively performance by Backstreet Boys charmed the massive, multi-culti crowd. And above it all -- literally -- it was snowing. 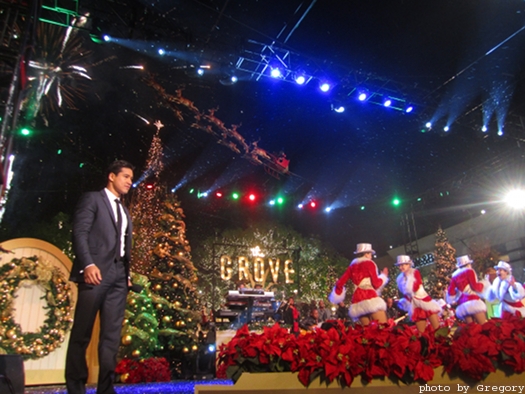 Thanks to the showmanship of Adam Williams, the huge, enthusiastic throng at the Grove (who already caught a pleasing winter-esque chill as temperatures dipped way down into the 50s) got to enjoy a rarity in L.A., to say the least: magic snow -- or, as Williams' ever-expanding company is aptly called: MagicSnow. Backstage, I spoke with Williams about his 10th anniversary of creating improbable winter wonderlands -- including making it snow at the Grove.

"This is actually our 11th year," Williams clarifies, "but it's the 10th year we're celebrating. This is the first location we ever had it, and I started the company with this project. Now we're working all over the world. We're in Brazil, Europe, Asia, 25 shopping centers here in the U.S., five in Mexico. It's all grown from here at the Grove." 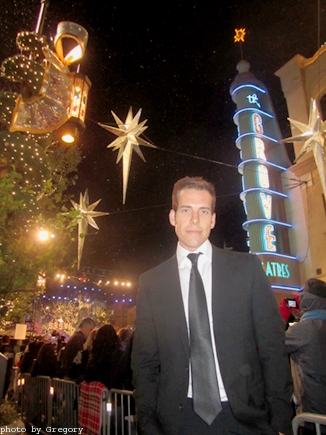 Adam Williams, in his element.

I ask about the initial impetus for creating climatic change.

"Well, honestly, we don't have snow here in Los Angeles," he reveals. "I moved here from Ohio about 15 years ago, so when I first moved out here, the first thing I noticed during the holidays, other than the fact that we didn't have snow, was that there wasn't a place where you could experience the Christmas spirit. When the Grove opened, I saw an opportunity, because my background is in magic and special effects. So I saw an opportunity, for something on a large scale, to bring that Christmas spirit here to Los Angeles." 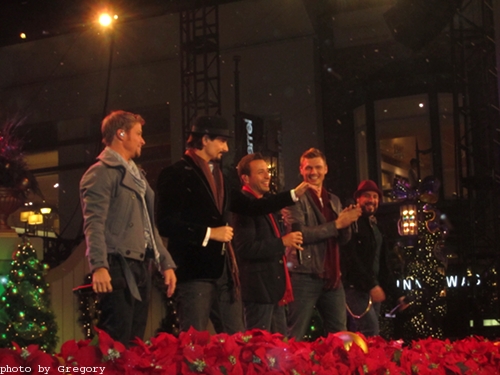 Backstreet Boys celebrate their 20th... and get all wintry.

The showmanship intrigues, but what about the behind-the-scenes stuff? Does Williams contract out?

"No, obviously my business has grown since the first year. I started off myself designing and installing the installation. I was the one who would go up and actually do the physical installation on the rooftops. But now we have a crew of about 20 or 30 people that take care of that. They're all following the same principles that I started 10 years ago."

I liken this to a touring group.

"It's kind of like a touring rock show," laughs Williams. "We're a seasonal business, but everyone comes together in August. Heyyy..." As if on cue, he is suddenly greeted by a fan. (It's a cheery scene.) 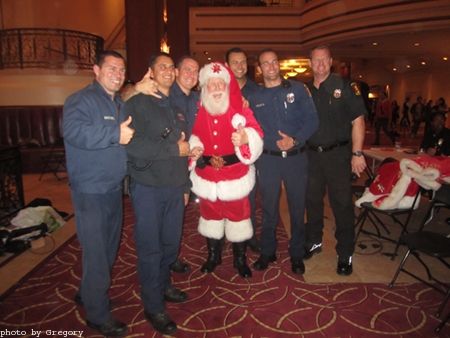 Santa trades in his elves for... security dudes?

"We did a launch for Jaguar in New York City, where we made it snow in August," he recounts, "so it goes beyond holidays. Whenever a company or individual needs snow, and it's somewhere that it doesn't snow, then they call us up, and we come in and make that magic happen." 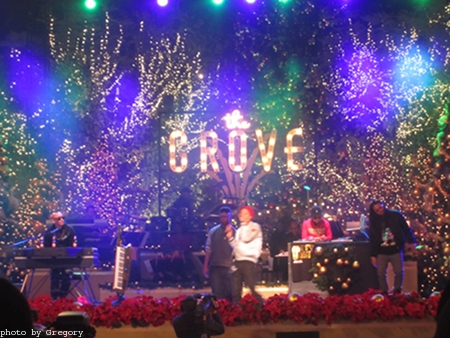 At this point I've got to know if he still pulls rabbits from hats, so to speak. Alas, although a veteran of Hollywood's famed Magic Castle (impressive!), plus cruise ships and colleges, Williams is retired from stage performing now, concentrating on his company.

"Really, my skill, my talent, is behind the scenes," he objectively (and it turns out provably) states. "Havng the vision, and creating these large-scale spectacles. That's really what we're trying to do: create an environment and transform it -- let's say, creating a living snow-globe." 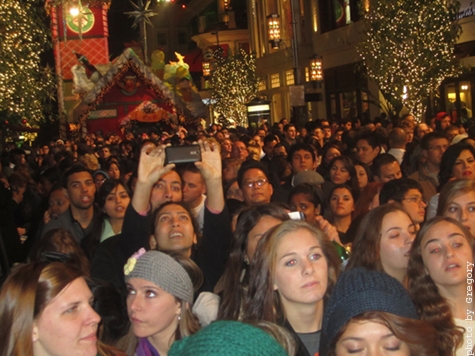 Shiny happy people: at the Grove.

And did he expect crowds of this magnitude?

"Every year, it gets bigger and bigger and bigger," he enthuses. The first year I did it, I had no idea I'd be standing here, ten years later, still making it snow. But it's become an amazing holiday tradition. You know Christmas is here, when you see the fireworks, and you see the snow." 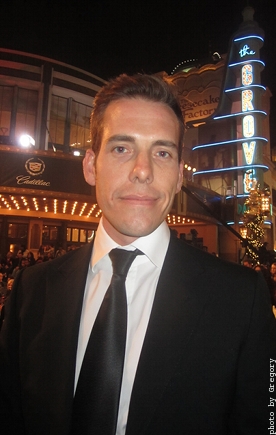 Bravo that. I'm often the random, absurd, improvisational type -- but I must say that the Grove show's sleek theatricality is stunning and wonderful. Shiny happy people of all walks of life, catching some primo entertainment and cheer whilst (pardon the dangling preposition) gettin' snowed on! 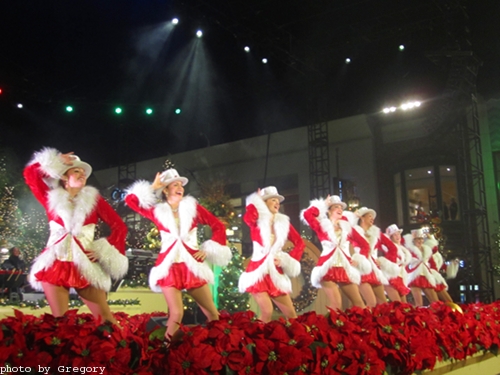 Also -- genuinely heartwarming and life-affirming -- Make-A-Wish Foundation truly represented, bringing forth teen Rebecca, who is striving to overcome a malady and deserves some big-time holiday cheer. On her first trip to L.A., she got it! Far East Movement accompanied her onstage (with a huge boombox present and gift basket) to meet the evening's host Mario Lopez (who promised her backstage fun at The X Factor). And then Grove owner and operator Rick Caruso (whom Lopez dubbed "Caruso Claus") and his wife bestowed upon Rebecca that sweet teen dream: Grove gift certificate! Then came more magic: Rebecca pushed the big button to light the hundred-foot Christmas tree -- and ignite the fireworks! 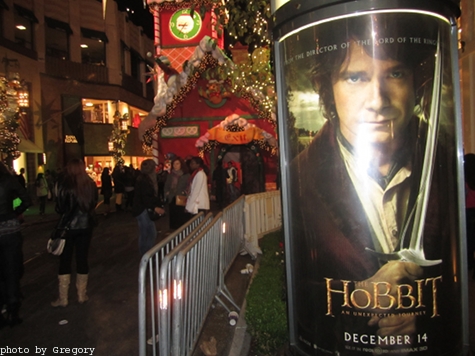 Hey! My present is already under the tree!

Songs, stories, spectacle, socializing, and (of all things) snow. It was a very impressive evening. The celebration continues this Saturday night, as the Grove presents a special outdoor screening of the truly terrific Aardman-Sony animated feature, Arthur Christmas. (Go. It's hilarious.) Plus it's rumored that Santa will return...