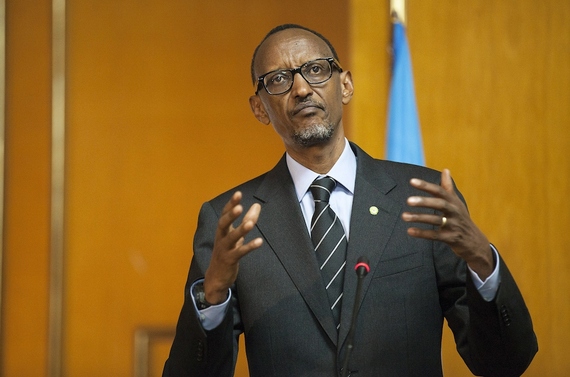 Rwanda, a name indelibly associated with the genocide of as many as 1 million people, is today a beacon of hope on the African continent -- in large part due to the leadership of President Paul Kagame. After his election as President in 2000, he vowed to heal the country, promote good governance, advance human development, and pursue an economic vision that would make Rwanda a middle income country by 2020. He initiated the drafting of a constitution to enshrine pluralistic governance and democracy. He grew the service sector, from banking and finance to trade, medical services, and tourism.

Acting on the conviction that women's empowerment is essential to national development, Kagame instituted a quota system in parliament to guarantee them a minimum number of seats. Today, via transparent elections, women have far exceeded the quota by simple winning at the polls. They now hold 64 percent of the country's parliamentary seats, the highest proportion of any parliament in the world.

Perhaps of greatest significance to a nation bloodied by its recent past, Kagame has achieved a model of post-conflict justice and reconciliation that is on par with that of post-Apartheid South Africa. After the genocide. he revived the country's traditional "Gacaca" community courts and deputized them to try over a million = suspects. The courts were mandated to grant lenient sentences, to be commensurate with the defendants' degree of remorse and sharing of truth and therefore closure to the victims' families. Meanwhile, Kagame steered the "National Unity and Reconciliation Commission" to offer peace education, inculcate liberal egalitarian values, provide trauma counseling, and, above all, promote just, transparent, democratic institutions capable of helping to defeat the conditions that lead to civil conflict.

In Kagame's view, national reconciliation ultimately rests with the population itself. As he told an audience at the Wharton School of the University of Pennsylvania recently, all the peace-building projects his government has built carried an underlying message to Rwandan citizens: "You are part of this. Ensuring your security isn't going to be achieved by somebody doing it for you. You need to participate and ensure that you give security to others and you can expect that others will give security to you." Praised for his role in supporting the effort, he said it would be follow for him or other Rwandans to rest on their laurels: We have built a very firm foundation, but then you have to build on top of that. We are now in the phase of building on the foundation. The foundation is there: people understand the reason to get along and to give and take. They understand that not everything will be rosy and not all people will be satisfied, but there will be a balance that allows us to move forward."

President Kagame in conversation with former British prime minister Tony Blair at the World Economic Forum on Africa, May 2016. Over time, Rwanda has become one of the fastest growing economies in the world, achieving an average of more than 8 percent growth over the 16 years Kagame has held the reigns. The wealth, moreover, is far more evenly distributed than the many kleptocracies on the content where impressive GDPs mask massive graft and a hoarding of wealth to the privileged few: In health and education, Rwandans are benefiting from the country's new resources and capacities. Poverty, still alarmingly present, has nonetheless been significantly reduced.

Small wonder, as the President's second term draws to a close this year, that the population has called for the immensely popular Kagame to run for a third. A constitutional amendment making it legal has sailed through parliament and won majority popular support in a national referendum. Kagame has signaled that he will run, win, and accept the popular mandate.

Yet he is is facing international pressure to refrain from running for a third term of office. Earlier this year, upon receiving word of Kagame's likely third bid for the Presidency, the U.S. State Department said it was "deeply disappointed," and warned that it would likely "weaken democratic institutions." America's UN Ambassador, Samantha Power, stated that she "expect[s] President Kagame to step down at the end of his term in 2017." The European Union, for its part, was no less emphatic: EU foreign policy chief Federica Mogherini declared that the move "weakens the credibility of the constitutional reform process, as it undermines the principle of democratic change of government."

But defenders of Kagame see a double standard underlying the international campaign against his third term. For example, Germany, from which much of the pressure comes, is itself currently led by a Chancellor serving her third term in office. In the U.S., Senators and Congresspeople serve without term limits, and the American Presidential term limit is still a relatively recent development: Over four consecutive terms, Franklin Delano Roosevelt ably led the country through the Great Depression and Second World War. There is a feeling of Rwanda that Kagame is the nation's "Roosevelt," and his leadership is sorely needed at a critical moment for the country. Yet outsiders would deny the population their preferred candidate.

At the same time, Kagame is not without his international supporters. Earlier this year at the World Economic Forum in the Rwandan capital Kigali, American businessman and philanthropist Howard Buffett wholeheartedly endorsed a Kagame third term. Buffett, himself vested in Rwanda, said, "If I didn't think president Kagame was going to be here for another seven years," he said, "we wouldn't even consider doing some of the things we're trying to do." Former British Prime Minister Tony Blair, himself a three-term head of state, lent his voice in support of a Kagame third term as well.

Among Kagame's international boosters, a pattern emerges: They are supporters of the traditional "Pax Americana" who recognizes that he has been promoting liberal universalist principles and good governance within his country. They are also know that he has been a friends to American and British entrepreneurs and companies as they strove to make their way into African markets. Rwanda is one of Israel's closest friends on the African continent to boot. And last Tuesday evening, Moroccan King Mohammed VI came to the Rwandan capital Kigali for a series of meetings with Kagame and senior officials. The two leaders signed more than two dozen bilateral agreements to deepen trade, investment, and cooperation for governmental reforms and human and economic development. From the standpoint of the Moroccan monarch, boosting relations with Rwanda falls into a broader vision of Morocco as a guarantor of peace and development across the continent and a bridge between the continent and Morocco's staunch American and European allies. The king went to great lengths to voice his appreciation for Kagame's leadership.

It is incumbent on Kagame to nurture new leadership in Rwanda, thereby ensuring that the institutions he has played a vital role in building will eventually run smoothly without him. But there is no reason why, after a stunningly successful run as leader and healer-in-chief and overwhelming popular support for his continued leadership, he should bow to pressure from outsiders powers to retire. His country needs him, the African continent needs him, and the world needs him.