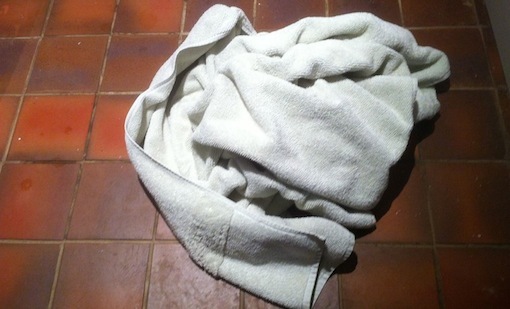 I have to stop hanging up my kids' wet towels.

I'm going to say this to myself, every day, many times a day, like a mantra -- until I listen to myself.

My kids are never going to learn how to do things for themselves unless I let them. I know this. I write about this. I preach all the time to others about the necessity for kids to be independent. I was on Fox News once talking about why it is best to leave your kids alone, literally and figuratively. I was featured along with some life coach from New Jersey by way of Alabama who said not to leave kids alone because it is unsafe thanks to things like "fire" and "terrorism."

I rolled my eyes and said kids will only learn if we trust them, and she disagreed -- until the cameras stopped rolling and she told me that she agreed with me.

"We're smart though, we're from New York," she said in her deep Southern accent, "but those people, listening, they're stupid, and we have to scare them."

I knew firsthand that my kids learned to trust themselves when I left them alone, not that I had the time in my 30-seconds on camera to tell the story. But it had been a revelation, the afternoon I had to run out to the store and I told my then-6-year-old, my eldest, to get the mail, go upstairs, and start his homework.

University Settlement
He'd been impossible to deal with after school, maddening to try to focus on his work. I would stand over him and try to force him to pay attention, I would ask questions and he would squirm and squeal, seemingly trying but having difficulty.

I was nervous to leave him, but also hopeful. I remember crossing my fingers in the hopes that he would be okay, but knowing it was important to give it a try, that I would never feel comfortable doing it for the first time.

When I got home 10 or so minutes later, he was calm. He'd gotten the mail, answered the phone and took a message, and was sitting at the kitchen island with his homework started.

"Great!" I said, trying not to show my utter astonishment, trying not to let him know that there had been a part of me that was afraid he couldn't do it.

I know this. I know the lesson that I learned that day applies to other things besides homework. I know that my little one freaked out when he went on his own to a baseball game and couldn't find the team, that I felt horrible guilt for letting him go on his own but didn't let on, and just told him to calm down next time and keep his wits about him, to breathe and borrow someone's phone, and I know that that is exactly what he did days later, when he went to go somewhere on his own and got lost again.

I know they are capable of cooking, and cleaning their room, and hanging up their towel. I have to work harder to give them the opportunity to do these things -- and to trust that they can.

The other day, I gave a little speech from the Boring Lecture Series, on exactly this subject. Eli was explaining how he was going to work harder in a class that he'd been a little inattentive in, prompted by some feedback from the teacher in a mid-term report.

I suppose it is up to our kids to decide who they're going to be. It's our job to model some good behavior, though we're not ever perfect, and to lovingly teach them some strategies for living. But at some point, they have to learn the consequences of their actions.

If wet towels are left in a heap for days, they're often pretty smelly. And still kinda wet, and gross. It'll be a small insignificant setback, using a smelly wet towel, but maybe, hopefully, it will teach them something about taking on responsibility for themselves.

Read Fearless Parenting every other Thursday on BrooklynPaper.com.

More:
parenting adviceKidsParenting Parentstrust
Newsletter Sign Up
Raise the kind of person you'd like to know
Subscribe to our parenting newsletter.
Successfully Subscribed!
Realness delivered to your inbox