You don't try and pet the Greenland sled dog with a cheery Mickey Mouse-like "Come here Pluto," a pat on the head and a treat in your hand, because the treat will be your hand.

The Greenland Husky, a handsome, powerful, sturdy creature with slanted eyed, is a direct descendant of the dogs that came across with the first Inuit 4,000 to 5,000 years ago from Alaska, Canada and Siberia, and is often euphemistically described as a 'working dog.' 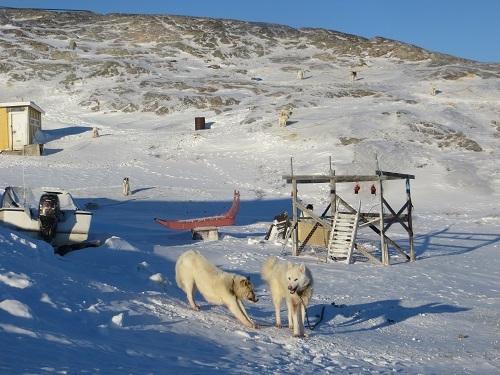 This means he or she is not your regular man's or woman's best friend, however adorable they may appear and despite their sterling exploits in crossing vast, difficult, snowy wastes at a regular clip. 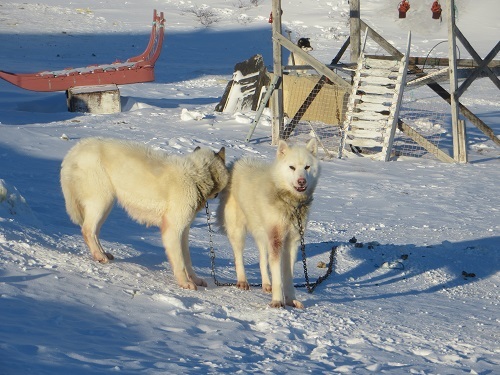 As National Geographic somewhat poetically notes, the animal is 'valued for its strength and speed rather than a malleable temperament.' In other words, steer clear if they're on the loose, and keep the baby strapped to your back. 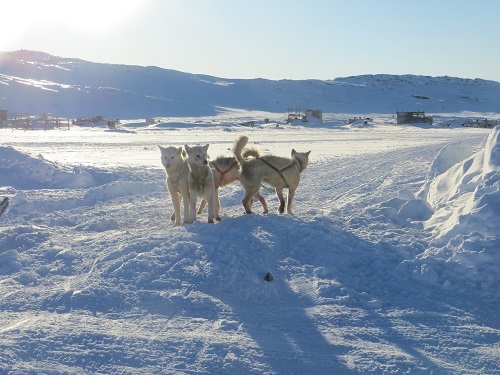 So you stand back and admire them from a distance as they howl and yelp and rear up and charge around in their myriad enclosures, as they are now doing on the outskirts of Ilulissat here on the west coast. In fact there are almost as many dogs here as the 4,500 inhabitants. 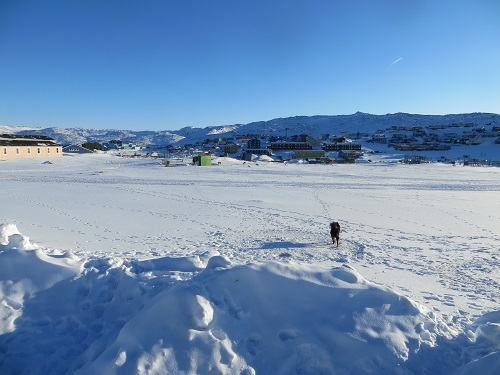 Another thing about the Greenland dog is that unlike their friendlier second cousins in Nunavut, Canada, and Svalbard and northern Norway, you - that is the tourist - don't take the reins as you may over there. 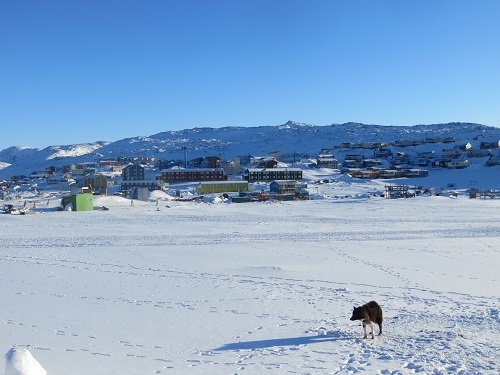 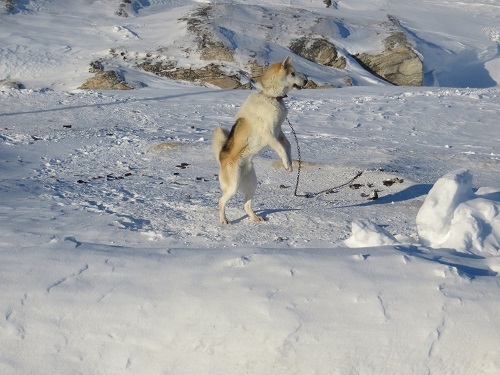 The dogs only obey the voice and grunts of their trainer and master. This is fine by me since I thus avoid some of the more interesting positions I got myself into (and they most certainly weren't missionary) when I was at the helm on my previous sledding endeavours in those above-mentioned places. 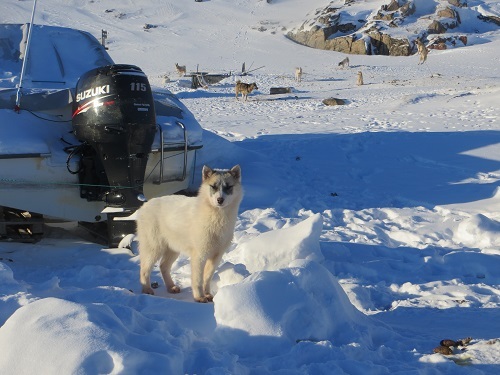 Some people in our group are going on a 2-day/1-night dog sledding ADVENTURE. They sled six hours out to the shore near a glacier, spend the night in a cabin, then sled six hours back. 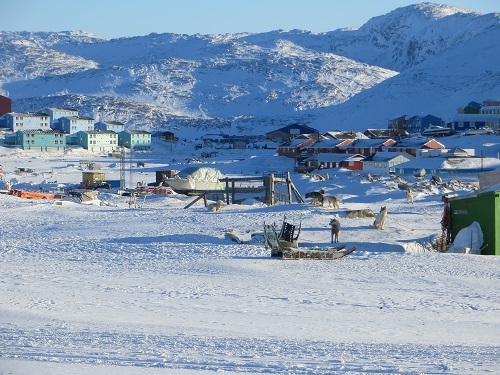 Getting ready for the pack

I'm not that idiotic. I've already frozen my knackers off, and the tops of my thumbs and fingers have started to split from the nano-seconds of exposure when I doffed a glove to take a photo, creating nice bloody miniature versions of the crevasses that streak the massive ice cap.

They tingle and are purple, which I'm told is better than their being all black. Besides, I'm not gonna pay an extra $1,000. 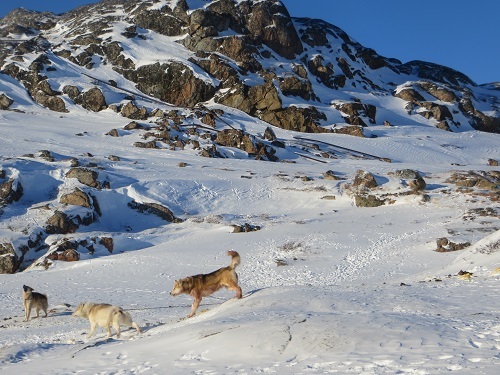 During their absence the tourist office says I can go ice climbing, all kitted out with spiked boots and crampons, again for a tidy sum. Now why in hell would I want to do that? I'm not in a suicidal vein today. 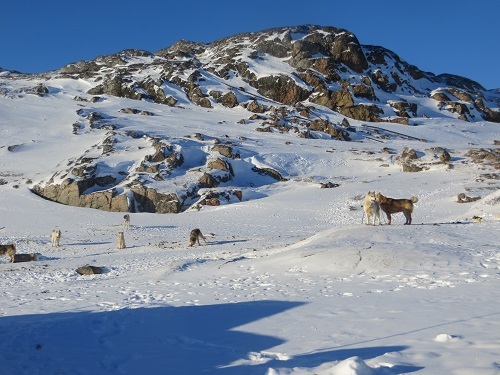 Who says it's cold

The three Danes who went overnight dog-sledding are now back, happy with their escapade even if it was frigid, the two Singaporeans who went ice climbing are now back, aching, barely able to raise their arms above their shoulders after taking three hours to climb about 20 vertical feet, and Yours Truly is now ready to venture off on a two-hour trip with the best of Greenland's Hounds of the Baskervilles. 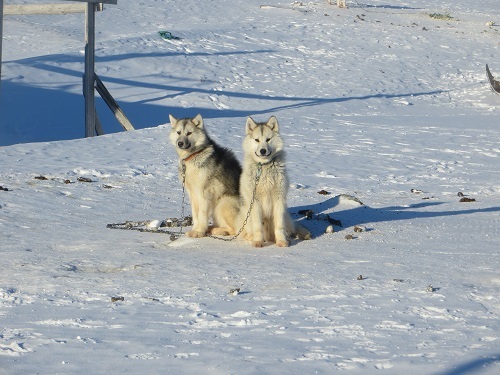 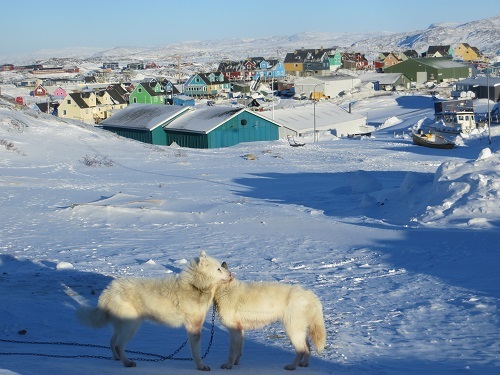 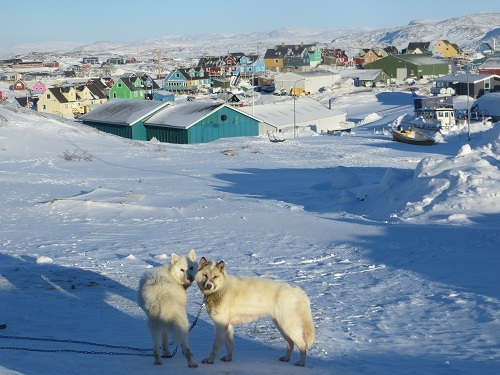 My Inuit driver smiles back, exposing a great gap where his front teeth should be, and I sit back and freeze off what little remains of me as the Arctic wind gob-smacks me. 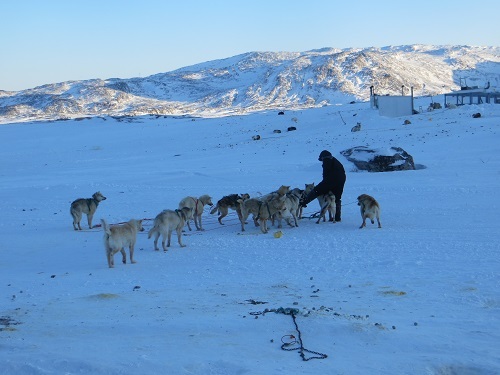 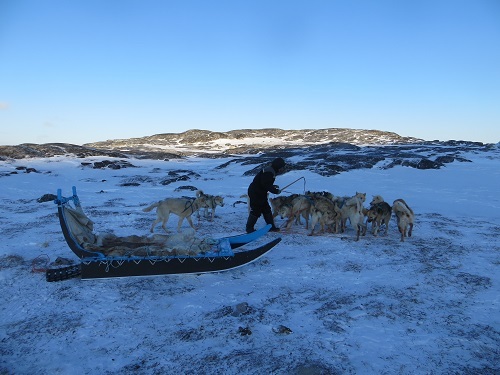 And we're off -- crapping on the run. That's what Fido, Rex, Rover, Mr. Bugger-Bugger -- or whatever he's called -- and their eight colleagues are doing in such masterly fashion as we now glide, now bump, now almost overturn across the frozen wastes. They barely fall back as they shit and pee while all the time cantering onward, the sled bumping over snowed-up rocks and ice boulders. 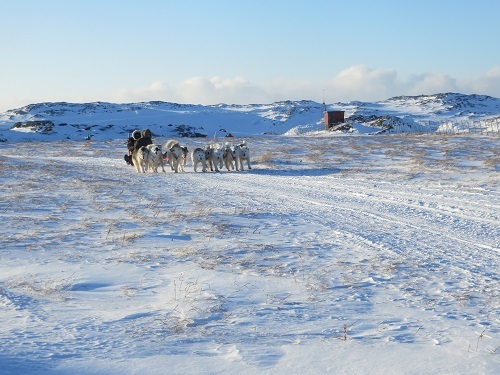 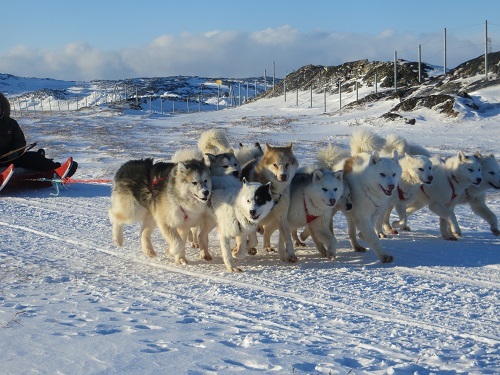 It's so cold today that the frigid sea water is steaming because it's so much warmer than the surrounding air. With the wind chill factor it must be at least -40, both Fahrenheit and Celsius.

But it's gloriously sunny, the sky is a gentle pale blue, the icebergs and snow fields are dazzling white, the dogs are howling and yelping up a storm, the icicles on my eyelashes are glinting beautifully in the golden light. The left lids have gummed up and I have to separate them manually. 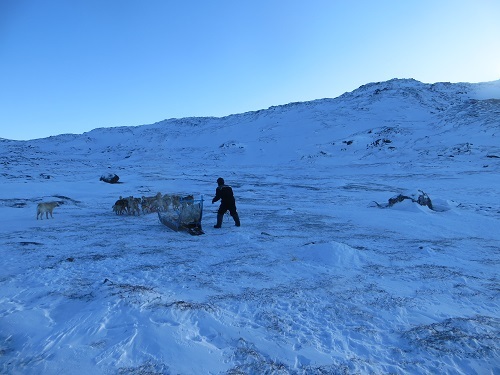 Ah, yes, to Greenland-ise that old classic of the American Wild West:
Home, home on the range,
Where the seal and the polar bear play,
Where seldom is heard a discouraging word,
And my bi-polar bollocks freeze away. 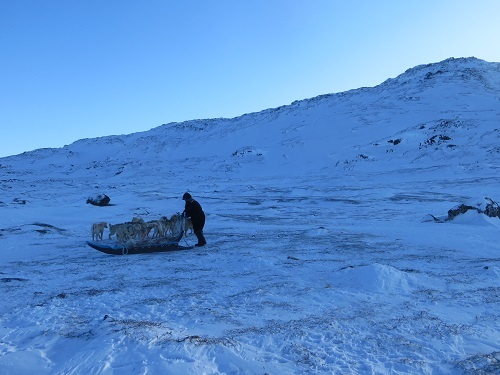 In fact, it's my hands that have frozen into total wood-like insensitivity. I can't do a thing with them and the guide has to remove the extra-huge sled boots they kitted me out with, reshod me with my regular boots, and tie the laces. 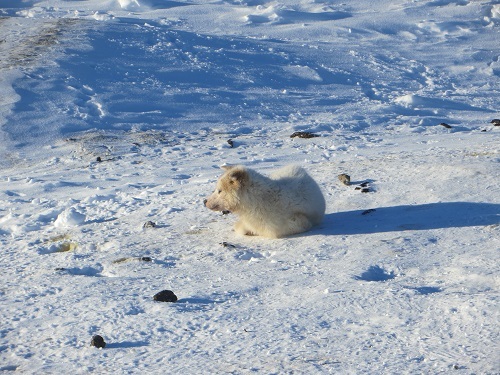 To top off a wonderful day, we clamber blind up a snow bank at night, falling all over the place on another royal hunt for the Northern Lights again. Several people set up their hyper-techno cameras on tripods and wait.

Amazingly a German lady who has used her hyper-techno camera to take detailed photos of every course of every meal we've had at the Arctic Hotel does not set up aforesaid camera for the possible appearance of Ms. Aurora Borealis. 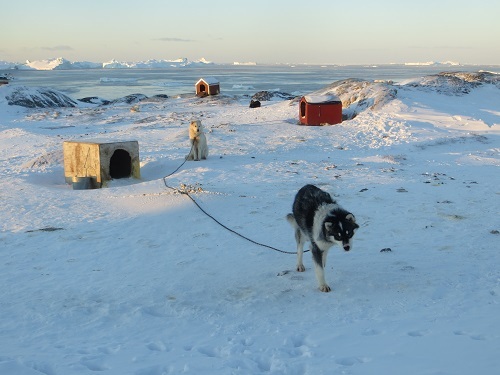 Working dogs at the Arctic Hotel

There's a whitish glow on the horizon. I complain that it's not green. The guide says it is green but in a shade that the human eye can't discern. Thanks very much but what frigging good is that seeing that I have human eyes -- some would dispute that.

What's more, the very human lashes of my all too human eyes have iced over again, gumming my upper and lower lids together whenever I blink. 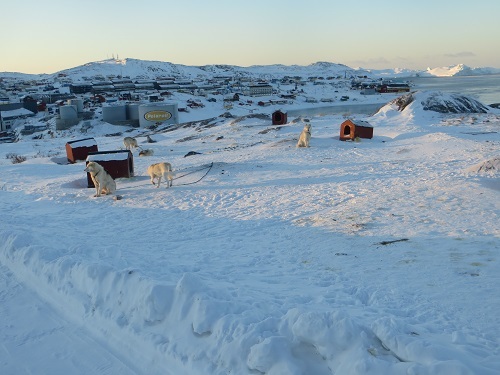 Suddenly the glow broadens and brightens, covering much of the horizon to a considerable height. Sparkling white columns shoot upwards like vertical searchlight beams made up of dazzling particles of celestial champagne, then fade, then shoot up again in a different area.

They may not be the billowing green curtains and crimson and purple veils you see in photos of the more dramatic of Ms. Aurora's performances, but it's still a jolly good show, even if the curtains and veils are white tonight. 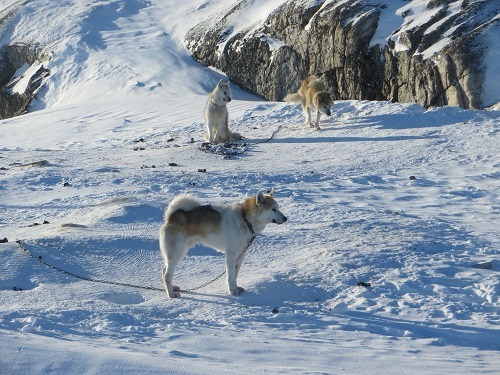 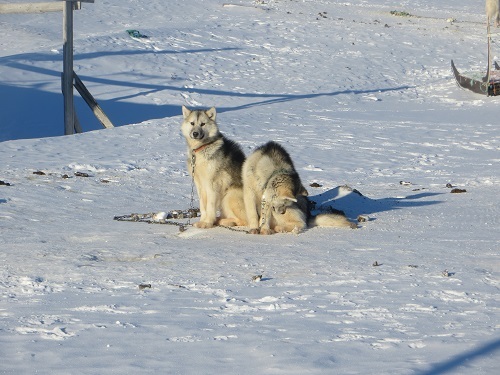 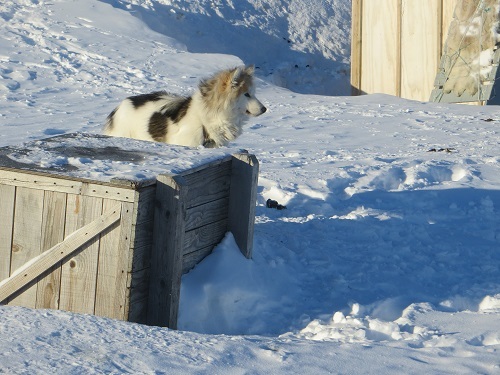 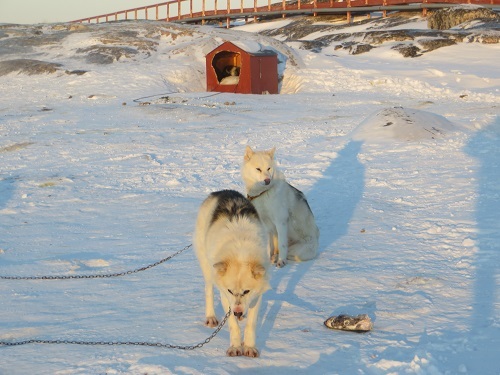 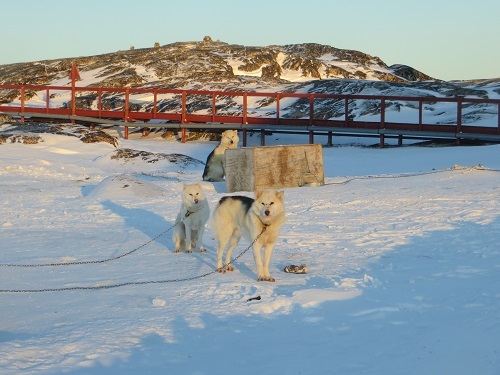 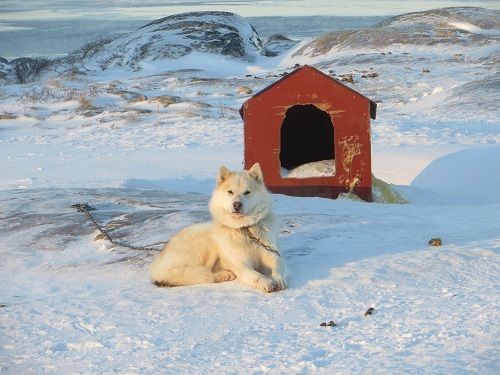 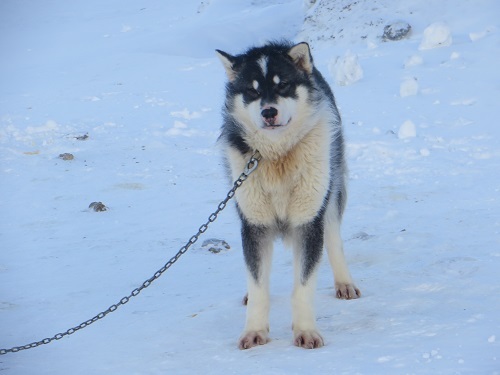 By the same author: Bussing The Amazon: On The Road With The Accidental Journalist, available with free excerpts on Kindle and in print version on Amazon.