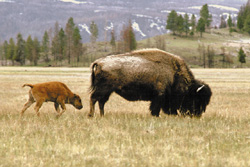 Of the tens of millions of buffalo decimated by the government sanctioned genocide of the 1800's, the remaining two dozen sought refuge in what is now Yellowstone's remote Pelican Valley -- a move that ultimately ensured their survival as a species. As a result, today's modest population of Yellowstone buffalo, numbering close to 4,000, is the only herd with direct genetic lineage to the original 23 that prevailed out of the estimate 30-60 million that once roamed freely across the Great Plains. (Left photo: Buffalo Field Campaign)

Every winter and spring, a portion of these last great herds of wild and genetically pure buffalo, embark upon their annual migratory routes in and around the surrounding areas of Yellowstone National Park. They are the only buffalo that have continuously remained on their habitat since prehistoric times and the last to still follow their migratory instincts. Yet what should resemble a peaceful picture of noble giants roaming freely with their young ones quickly turns into a nightmare scenario once the buffalo approach the outer parameters of the park's boundaries where they are faced with capture, harassment, hunting, hazing and slaughter by the hand of none other than Good 'Ole Uncle Sam.

As if enough misery and suffering was not inflicted upon these magnificent beings the first time around, the buffalo, held sacred by several Native American tribes and cultures, are once again under attack by federal and state government agencies. After increasing pressure from Montana's livestock industry, the Montana Department of Livestock has been designated as the agency in charge of the current Interagency Bison Management Plan, while the National Park Service, the U.S. Forest Service, and the Montana Department of Fish, Wildlife and Parks are cooperating agencies that help assist in the shooting, hazing, capture and slaughter of the buffalo in facilities located both outside and inside of the park. 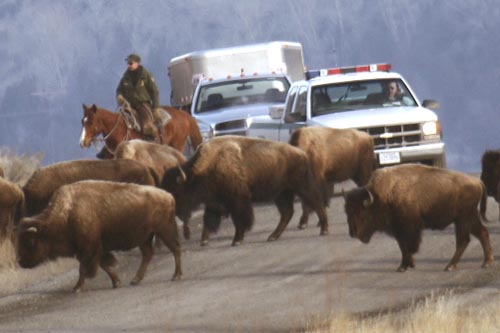 The government's convoluted argument is that buffalo pose a risk of spreading brucelosis, a cattle disease brought to North America with the arrival of Eurasian cattle. However there has never been a single incident of transmission of the disease from wild buffalo to cattle, even in areas where infected buffalo and livestock have co-mingled for more than four decades. Elk on the other hand are renown carriers of the disease and have transmitted it on several recorded occasions in the past, yet are allowed to migrate freely and commingle with cattle, leaving one to wonder why there is no "management plan" in place to deal with such a considerable (read: legitimate) threat.

The reality is that year after year taxpayer dollars are sponsoring the scapegoating of an animal that should be revered as national and cultural icon so that a handful of ranchers can graze cattle on public and private land adjacent to Yellowstone National Park. It is this legacy of greed and deceit that is responsible for more than 3,000 buffalo slain since 2000, when the Interagency Bison Management Plan took effect. According to Mike Mease, co-founder of Buffalo Field Campaign, who has been on the front lines of the struggle to protect this majestic species for over fourteen years:

"There has never been a documented transmission of brucellosis from wild bison to cattle, which ironically was introduced to this nation by European cattle, yet the cattle industry is determined on keeping the buffalo classified as an animal "in need of disease control." As such, they are trying to domesticate the buffalo and breed the "wildlife" out of them based on this blatant fear based hype. It is very similar to what we've done to the Native American in this country. In fact, we often call Yellowstone National Park the Bison Reservation."

Under an agreement between federal and state government agencies, the Montana Department of Livestock and Yellowstone National Park engages in the annual capture, test, and slaughter program which according to BFC involves the use of snowmobiles, helicopters, horses, ATVs and state and federal law enforcement throughout sensitive habitat important to numerous wildlife species. Once the buffalo approach the borders of the park's confines, the so called "management" plan kicks in. Unfortunately, "wildlife" are not accustomed to following man made maps or roadblocks and pay severe consequences for stepping out of boundary.

"The Buffalo are being persecuted by the same interest groups that wiped them off the continent in the first place. There is a huge benefit to the cattle ranchers who want to see public lands used for grazing cattle. Cows are an invasive species and we now control our wildlife in this country on their behalf including targeted hunting campaigns against wolves, grizzly bears and buffalo." 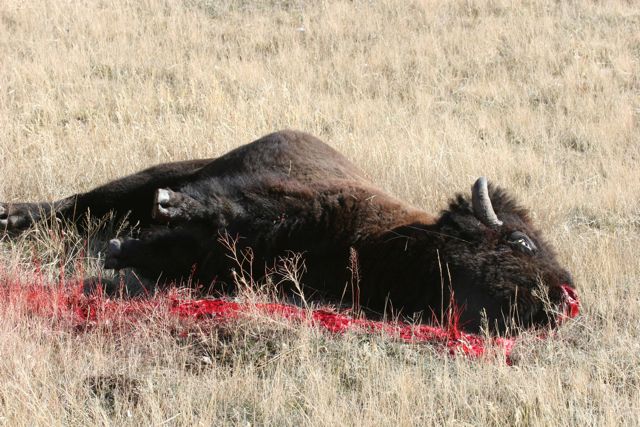 Furthermore hazing operations prove extremely disruptive to various bird species such as trumpeter swans, golden and bald eagles, white pelicans, and sandhill cranes while high electric fencing to keep the bison out of many adjacent areas eliminates movement of other species as well such as the local pronghorn, bighorn sheep, elk and deer. The impact upon all of these species and their potential disappearance carries devastating effects to the entire natural environment due to the first basic law of ecological interdependence. One would assume that any agency acting in accordance with wildlife conservation would grasp this fundamental principle. According to veteran BFC team member, Stephany Seay:

"Scientists believe the Yellowstone Buffalo are the only population that has not been contaminated with cattle genes, making them the only buffalo population to maintain their identity as a wildlife species. Protecting this population is about more than just genetics; you can have genetically pure buffalo behind a fence, but that does not honor their wild integrity. It is their uniqueness that makes them so special and worthy of great protections if they are to survive into the future and reach their evolutionary potential.

Often times the buffalo sustain further injuries or death during the 500 mile transport in 18 wheelers while they are continued to be mistreated as livestock and ultimately slaughtered. In attempt to save face, the Montana Department of livestock have implemented strategies to donate the bison meat to "needy" citizens, however it is often times rendered unfit for human consumption due to the tortuous nature in which the animals were brought to their deaths, particularly amongst Native American populations whose ancestry and history carry a deep cultural respect for the animal. 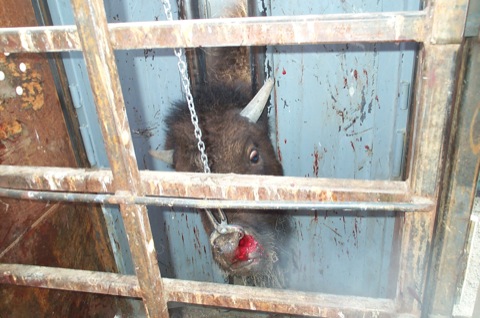 To add further insult to injury, this year Yellowstone National Park was caught on video by BFC activists admitting that holding bison at the Stephen's Creek capture facility, located at the far north end of Yellowstone National Park actually increases the risk of spreading brucellosis to the herd, thus accelerating the very culprit in which they claim to be protecting the species against. The picture is anything but pretty. According to the most recent accounts on the BFC website:

"The buffalo hazed into the trap will be held in confinement for an unknown period of time, placing them under a great deal of stress and, based upon similar operations in the past, causing serious injury and even death to some of the captured animals. Family groups will be separated, mothers from calves, brothers from sisters. They will then suffer squeeze chutes, blood tests, and highly invasive pregnancy tests. Yellowstone and Montana will randomly choose twenty-five buffalo from this test group that have blood-tested negative for exposure to brucellosis, and then further torment them by forcing them to wear ear tags, radio collars, and -- for pregnant females -- vaginal telemetry devices. These twenty-five buffalo will then be pushed through a small Corridor to Nowhere, encompassing less than 2,800 acres, surrounded by electric fencing and cattle guards, where they will be expected to stay until spring before they are eventually hazed back into Yellowstone."

"They've already killed 50 in the hunt this year and captured another 18 today, making over 67 in the capture facility to date. It's already been a very sad and hard year for the buffalo," added Mease from his BFC Headquarters in Montana.

Do we not owe it to both the species and the Native American cultures for whom this animal is a sacred cultural emblem to protect these innocent and intelligent creatures, America's only remaining free-roaming buffalo, from further exhaustion and overall degradation and despair? As stated on the BFC website, "These buffalo are a national treasure, indigenous to most of North America and they must be protected now if they are to reach their evolutionary potential and maintain integrity as a wildlife species."

For more info, photos, video footage, updates from the field and to learn how you can take action please visit: Buffalo Field Campaign.

To learn more about the issue, please see the following video.