A friend drew my attention to the illustration to this weekend's LA Times analysis, "What Undid Hillary Clinton", by the New Republic's Michael Crowley. Nothing wrong with Crowley's piece — his thesis was that "she campaigned as the ultimate Washington insider just when Democrats were clamoring for an outsider" and he makes a good case — but nothing in the piece talks about Hillary's campaign drowning, melting, flailing, or sinking. The illustration doesn't really show her as an outsider, either - the most that can be gleaned is that the path from the White House led to her ruin....by melting/drowning/sinking. Sound like any other archetypical female character you know, my little pretty? 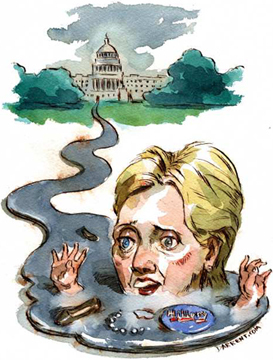 Follow the yellow brick road — you and your ruby slippers will get there pretty quick. Yes, the illustration invokes the famous Wicked Witch of the West melting scene from The Wizard of Oz, and if you don't believe me, well, check it out here:

So: Is this a big deal? Should I be outraged and angry? Am I overreacting completely? I don't think so — I tend to think characterizing the single female candidate for president as a witch is problematic (or, to be precise, in a manner reminiscent of a witch). I have said so before. I also think there is a problem with characterizing her as a nagging housewife, a crazy bunny-boiling stalker, a first wife outside a probate court, a scolding mother or as someone who will crush your nuts with her steel-plated thighs. I know! I'm so sensitive!

Yes, the illustration isn't necessarily a Wicked Witch reference, but then again, it could be — and it's a point the article doesn't even make (especially odd, considering that the piece provides a perfectly good metaphor - that of the insider/outsider). Should the illustration have been spiked? Eh, I don't think so — I am as loath to chill speech just as much as I am to let it pass without commetn when it's sexist. But I think it's worth noticing how easily these analogies are made, and drawing attention to them when they are.

Besides, if the illustration were spiked then I wouldn't have an excuse to run this one: 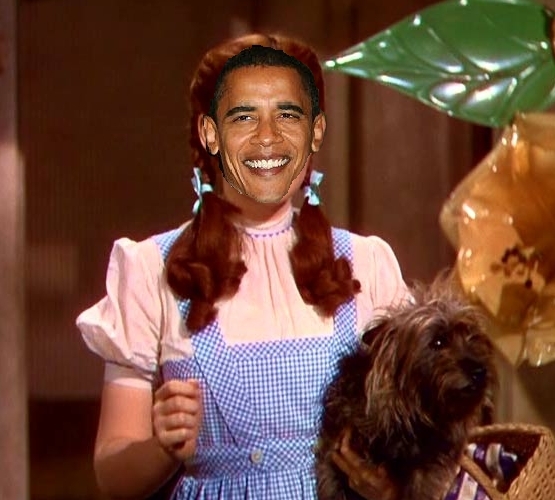 Here you go, MoDo! For your next column!

Related:
And The Dreams That You Dare To Dream Really Do Come True [YouTube]