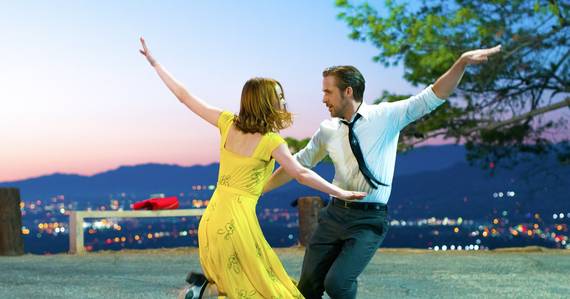 When in the course of human events a movie comes along that everyone on Planet Earth loves it is a fact universal that criticism will bring about the worst of times. Call me Douche Pile for not understanding that happy moviegoers are all alike.

And so it was after I first saw Damien Chazelle's lauded to the palm trees La La Land, the movie musical that's taken the world, and skeptics, by storm. I had -- brace yourself -- mixed feelings about the flick. I thought it was stunningly beautiful, wondrous at times, with two delicious performances by Ryan Gosling and Emma Stone, and impeccable direction via Chazelle.

What frustrated me about the film was -- brace yourself again -- the lack of great singing talent by the leads, along with some of the less-than-stellar choreography. It's precisely because I love musicals so much that I wanted the voices to set me soaring. I even thought that, just perhaps, two better singers might have been cast. I left the movie in a fluxed state, and took to Facebook to air my seemingly innocent views.

The treasonous accusations came so quickly I might as well have tampered with U.S. elections. My post was met with attacks on my character; I was a Scrooge, an impediment to the movie's Instant Classic status -- I knew better than to respond by saying "Instant Classic" is an oxymoron -- a cynical joy suppressor who couldn't be right about Gosling because he was part of the Mickey Mouse Club -- I knew better than to respond by saying Britney Spears was also a former Mouseketeer and I had no desire to hear her voice without auto-tune -- and just a plainly awful, sick, grotesque, misguided schmuck.

Remembering how most of my Bernie versus Hillary threads ended, I deleted my post before more people became privy to my anti-American sentiment.

Back in pre-social media world, a gay man in a bar started a fight with me because I confessed to having only seen Titanic once, enjoyed it, but had no desire to sit through it again. He'd already seen it three times, and told me that only a heartless man would skip out on multiple viewings. He'd be seeing it a fourth time just as soon as he finished off his apple martini.

It didn't help that I had a criticism -- I thought Kate Winslet seemed more like Leonardo DiCaprio's baby-sitter than love interest. Titanic analyses were inherently evil until the backlash started, which, when it happened, hit like the iceberg. Years later, I still think it's a terrific film, but have learned that admitting so is testament to my inferior human nature. Liking that song, oddly, is still a prove-you're-human must. It will go on forever.

The La La Land backlash is starting to hit, and it has little to do with the film's merits. Whenever a film wows the world, and is a commercial and critical success, the hateful soon swoop down to remind us it doesn't live up to expectations. It's as inevitable as Kanye West making an awards show ass out himself. Or just being an ass.

Instead of gloating in my "there were no weapons of mass destruction" now-acceptable LLL criticisms, I decided to take the diplomatic route: I shut up and saw the film again.

My initial reactions changed, and changed for the significant better. It's not so much that La La Land is a magnificent musical, it's that it's a magnificent movie. The soundtrack is icing. Contrary to what many have described as the most joyous film of the year, I found it to be devastating. The longing, the aches, the dreams realized and abandoned. It also boasts the best love story since Brokeback Mountain (another "love it/hate it," "sellout/masterpiece" flick).

It's not a feel-good movie; it's a feel-it movie, one that takes you away for two hours and leaves your emotions on tap when you exit the theater. The ending is a mini-movie itself, throwing all of us into that spin cycle of how things were supposed to work out, in our movie musical version of life.

The problem many have with La La Land is valid, and resonates with what's becoming a disturbing film trend. In short, there's no musical genius involved. Seeing it twice gave me the advantage of knowing ahead of time that Patti Lupone wasn't going to chime in with a show-stopping belter, and to have familiarity with the excellent songs, sung mostly by two people who are tunefully in love despite inexplicably not knowing how to call or text each other in emergencies. Perhaps that should have been their first clue.

What depresses me about modern movie musicals is that they've become horribly sanitized to appeal to the largest block of viewers, with results that vary from pleasant diversion (Hairspray), to downright, despicably bad (Into the Woods). In the process of focus-grouping the Great American Musical, we're losing both the thrill of the song and the thrill of the story. Chicago compromised itself every step of the casting and choreography way -- Bob Fosse had no interest in cute storytelling -- and one only needs to go back to Russell Crowe's "singing" in Les Miserable to be reminded of the idiotic marquee factor dominating most of today's musical adaptations.

With the wonderful exception of Jennifer Hudson in Dreamgirls, the dazzle factor of movie musical stars hasn't much been felt since Liza Minnelli chilled us in Cabaret, one of the greatest musicals of all time and one of the greatest movies of all time. I'd wanted the wow talent factor to hit me again in La La Land and that was my mistake. What did hit me was the wow factor of the storytelling, and a deft manipulation of musical imagery.

I brace the beauty of La La Land on a cautious note. We've finally got one half of the of the movie musical back, and now I want the other. I don't believe genius talents like Minnelli have disappeared, or Barbra Streisand or Gene Kelly or Fosse or Bette Midler or Fred Astaire. For whatever reason they're not being nurtured and promoted.

That's the lesson that needs to learned from La La Land, and one that can now be safely stated without fear of social media retribution. It's easy to publicly dislike something once it's fashionable, much harder when it's in vogue. In the meantime, I'm gonna enjoy that film to the high heavens. And any criticisms of that lackluster first number or silly pool choreography for the second song will safely end up at the end of this piece, when most people have already made up their minds about my own work. I don't want war; I want peace.