It wouldn't really be fair to judge someone's character based upon the number of people who show up at their funeral, but if a line of mourners forms at 4:00 p.m. and you can't see the end until 8:00 p.m., it's hard not to believe that whomever they're there for was a pretty special person.

My brother-in-law, Mike, was not a Hollywood celebrity or a political powerhouse, but he was a special person, and in his 66 years on this earth, he encountered many, many people who loved him and called him their friend. All you had to do was meet Mike once, and you were his friend, really. Hence the 500 pals who paid their respects. His death this past week, after being diagnosed with lung cancer almost a year ago, did not come as a great shock, but the realization that we will all no longer have Mike in our lives did.

In more cultured circles, Mike would be described as the epitome of a raconteur. The Indiana University grad and rabid Hoosiers fan had a story for every occasion, and as he wound you circuitously through it, you always ended up at the point of laughter. There were lots of laughs when Mike was around. His many years as a city manager in New Jersey exposed him to a huge cast of characters -- and with each one came a story. If you needed a butcher, baker, or candlestick maker... or even a doctor, lawyer or Indian chief, Mike could recommend one. As my husband said in Mike's eulogy, "he always knew a guy who knew a guy."

I often joke with my husband that Mike and his wife Sharon are part of the reason I married him. Their warmth and hospitality encircled me from the moment we met. (And their love of copious amounts of food didn't hurt either.) Years ago, Sharon baked a type of cake that had cherries on the bottom... and Mike was not a fan. He was determined to make a similar cake, his way. The fact that he'd never really spent much time in front of an oven did not deter him. And so began another story about Mike -- the Eggnog Cake Story. Once he perfected his "secret" recipe, everyone he knew received a Mike Trotta Eggnog Cake at Christmas time. 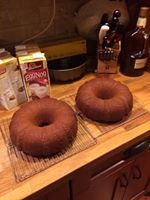 The tradition became so popular, and the list of recipients so long, that anyone who was not in the "Inner Circle," felt horribly left out. One year, when we still lived in California, we received not only two cakes, but one was still in the bundt pan. The cake was still so fresh when he shipped it out, Mike was worried it would fall apart without the pan.

Spray a Bundt pan with Baker's Joy with flour. Combine all ingredients and beat 4 minutes until smooth. Pour into prepared pan and bake at 350 degrees for 45-55 minutes. Cake is done when top is golden and toothpick inserted into center comes out clean.