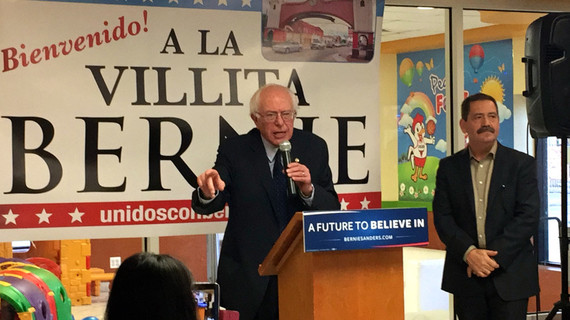 Latinos have had too many political promises broken already. A record number of deportations and shameful congressional dysfunction are just two of many reasons why in 2016 we must elect someone who is committed to do what he can as President, not on what Congress cannot or refuses to do.

Until a legislative solution to the nation's outdated immigration system becomes a priority for Congress, the right administration will need to examine a broad range of executive actions to enact immediately in the face of a Do Nothing Congress.

Legal experts from around the country have agreed that the President has expansive legal authority to act to temporarily protect additional groups from deportation -- and that this authority is rooted in statute, court opinion, regulations, and precedent.

Last month, Bernie Sanders released a detailed immigration platform that welcomes even the most vulnerable. His immigration plan is the boldest from any presidential candidate of both parties. This is also the exact opposite of the harsh, vitriolic rhetoric we have seen lately from Donald Trump and his camp.

Bernie Sanders supports offering a pathway to citizenship for immigrants already in the U.S. and halting deportations for almost 9 million hardworking undocumented fathers and mothers. He would also keep DACA, DAPA and would expand it to parents of Dreamers and others who fall under the 2013 Senate Immigration proposal.

He has also committed to not only reforming the legal immigration system, but dismantling inhumane deportation programs and private prisons that profit from jailing immigrants with taxpayers footing the bill, and reworking trade agreements that harm the working class on both sides of the border playing a major part in forcing people to migrate.

On the child refugee human rights crisis at the border, Bernie has shown the same consistency when it comes to refugee children across the board. Sanders said it was "appalling" that "so many voices" within the Democrat Party, like Hillary Clinton, were insisting that large numbers of immigrant children caught in a humanitarian crisis at the border be sent back.

So far I have looked and looked for a detailed plan from Hillary Clinton's campaign that can tell me where she really stands, but there is none. It is difficult to trust that a candidate will be the right one for our community, when you don't exactly know what their plan is. Doubly difficult (and even more harrowing) when you question their sincerity.

We need a leader who won't endlessly parse their words and weigh their statements. We need a leader who is genuine, sincere, and with a record that tells us that our candidate will not only be consistent on immigration, but will also make it a priority after the election.

The hope of a nation depends on a President that will follow through even in the most unfavorable of political climates. This country is waiting for fearlessly bold leadership on this issue. And so is this voter.