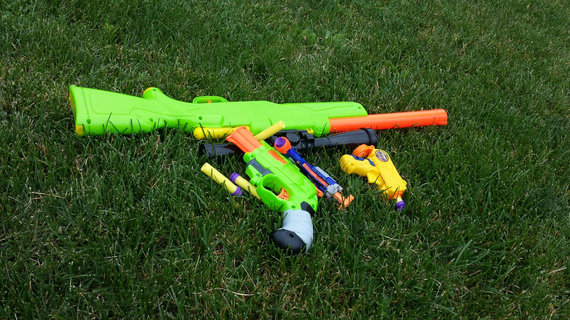 My heart froze when I saw those two little fingers pointed out in the open with the fierce expression and heard the words "bang bang." My then-three-year-old aimed his little finger-gun and fired into the air. Immediate fear and panic struck me. Where did he learn that?

I can safely say I am no gun expert nor is my husband. We do not own guns. It's not for any reason other than we have no interest in doing so. We aren't strong on guns or gun control one way or another. We can agree they don't belong in the hands of children.

Ever since my son was three years old he has been interested in guns. As parents, it is scary for us and we aren't prepared to handle the reaction. Our reaction is to stop our child - IMMEDIATELY. We are horrified young children would make a gun out of their fingers, aim it at anything and make a shooting sound. Some children haven't even seen a TV show with violence when they begin this behavior. Our son didn't watch TV until he was two years old. At that age he watched was only a few shows and they were violence-free. As your child ages, their experience outside the home will grow and they will likely view violence in reality or television.

So why do they make guns out of everything in site including their bodies?
Parents say this is not an uncommon behavior for small children. Most mothers I have talked to with (especially) boys have expressed shock at their child's ability to create guns out of anything. This is certainly not limited to boys as my three-year-old niece is just as interested in toy guns and gun play as my son.

Studies have shown there is no real link to toys guns and future real-life violence. I know it's hard to believe right? Our culture is not supportive of aggressive play or guns. We assume it creates violence and thus try to prevent it before it begins.

Our home resisted all types of toy gun use for quite a long time. We still resist in many ways but allow some play and toy guns. Here is what we have done about it and what we have learned:

1- Help your child learn the difference between play guns and real guns.
Some of our family members have toy guns from the 50s and 60s that look real. We have discouraged play with these types of guns. It's been challenging since they exist in other homes. But we have used those guns as an example of what not to play with. We stress the difference in the appearance of toy guns and real guns. The bright colors of Nerf guns and their lesser appearance to a real weapon. The plastic nature of toy guns is important to point out.

The appearance difference is important. You will not always be with your children at their friends' or relatives' homes. You want your child to be able to see a real gun, leave it alone and get an adult. You want them to resist the urge to touch a real gun if one is left out in a home. They need to know what is and is not a play gun. You cannot always trust friends' homes to be safe. Of course, we expect proper gun storage to be a top priority for all. But you can't guarantee it is so your child needs to be prepared to witness a real gun.

2- Let your child play in an organized fashion with rules with toy guns.
If you can't shake your child of their interest in guns teach them rules for safe play. We allow Nerf gun games in the yard. I will admittedly tell you I struggle with the concept. I can see how it clearly helps him have fun with something he wants to play with. He learns to listen, read and understand his friends verbal and body language cues. When his friends have had enough he can see that. When someone doesn't want to play anymore they are done. They are laughing and having fun. They run, they exercise and use skill to outthink their friends during their game. All the guns are Nerf and use foam bullets.

3- Provide rules of gun play and use.
Not allowing your child to play with their toy guns in the house is one rule you could choose. We don't allow inside toy gun play unless he has set up a target in his play area or the basement. Our son is not allowed to run around the house using the toy guns.

We don't allow direct shooting at other people or objects unless it's in the game fashion or at the target. He is never allowed to shoot at us. If he chooses this in a moment of fun or passion we take the toy gun away for a certain amount of time. We distinguish between his play and downtime. He is not allowed to walk around our house shooting a toy gun off.

Does letting your kid play with guns decrease their interest in the weapons? It's questionable. Kids still love their toy guns. They love gun play.

Perhaps you might see a decrease in their choice to gun play, but you might not. You might see improvement in their ability to follow directions, play appropriately with friends, and put the guns away at the end of the day. Their interest might be passing or it might lead them to a protective career like being a police officer. Guns are not always used irresponsibly by everyone.

More:
ParentsKidsGunsGun Control
Newsletter Sign Up
Raise the kind of person you'd like to know
Subscribe to our parenting newsletter.
Successfully Subscribed!
Realness delivered to your inbox