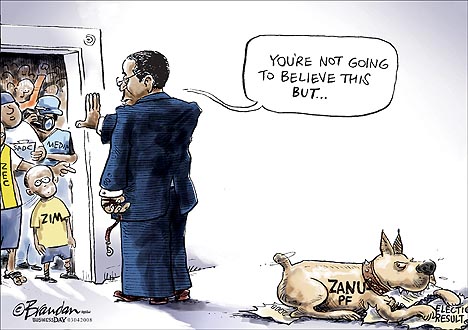 Rumor has it that President Robert Mugabe of Zimbabwe has agreed to a run-off election. The date that I have heard bantered about is April 19th. There are text messages flying across the continent and various groups ramping up to ensure Zimbabweans get out and vote the tyrant out of the office. My message to Zimbabweans: go back to the polls and vote! This man needs a clear and swift kick out the door!

The other rumor, though unsubstantiated, is that "Bob" is busy filling bags of currency as he raids the treasury. The suggestion is that he will leave the country. This would be great for Zimbabweans in many ways. Yet if he does this, there are major concerns that he will not leave a single Zimbabwe dollar for the country's recovery. This is when the global community, that includes The International Red Cross and the United Nations, must develop a plan to help this country become stabilized.

None of this will happen without some global pressure to get Mugabe out of office. This is the time when other African leaders must take a stand to support the will of the people and not stand mute in support of their comrade. Enough. How do we teach these countries to step up to assist the people of Zimbabwe?

There is widespread fear that the election will be rigged in a run off. I don't think it is going to happen. Too many people voted the man out of office. Too many people know and talk that they must have change in this county if the people of Zimbabwe are going to survive. When I talk about survival, its not "survival" you think of here in the United States; instead, Zimabwean's survival entails avoiding starvation and/or death. How will they stop the hemorrhaging of people over the borders?

Yesterday I was told that Mugabe only truly got 46 parliament seats instead of the 97 that are listed. As we all struggle for information and if this vote will again be rigged on the 19th, I know for sure one thing: There will be violence. The people of Zimbabwe have such pent up rage on how Mugabe has treated them that many want to force him to stay in the country, to make sure that he pays for his atrocities.

If Morgan Tsengarai becomes the new President of Zimbabwe, it is his plan to keep Mugabe in the country as well. His agenda will include having Mugabe pay for his atrocities, not only for the ruthless beating of himself but also for his close allies that were tortured and killed.

We are getting a lot of messages about Simba Makoni joining forces with Morgan...and this is truly good news. With Simba Makoni getting at least 8 percent of the vote (approximately) there are people who love him and trust him. We cannot forget how his candidacy split some of the key allies in the current administration and helped create the unstoppable rift. The idea of Morgan Tsengarai and Simba Makoni joining forces as a team brings excitement. Those two men can create a new beginning for this tyrant ravaged country.

Most importantly, some of those in exile are already talking about going "home". They are excited about the inevitable change in their country and the National Unity they feel is happening. They are excited about the loss of seats to ministers that harassed NGO's and women's group. The Minister of Women's affairs, Gender and Community Development, Oppah Muchinguri, was apparently trounced in the vote. This is good news to organizations who have sought assistance from the government on human rights abuses.

We are all watching the situation in Zimbabwe closely. If the dictator is truly going to fall, there needs to be quick and prolonged action. Now the international community must come together to help eradicate the AIDS epidemic, to provide food and medicine...and get the country planting crops. Things could change again, in the time it takes me to post this blog, but I still can't help but think there will be more than seeds being planted in this country soon.