With a click of her mouse, EatingLiberally's Kerry Trueman, aka kat, corners Dr. Marion Nestle, NYU professor of nutrition and author of Feed Your Pet Right, Pet Food Politics, What to Eat, Food Politics, and Safe Food: 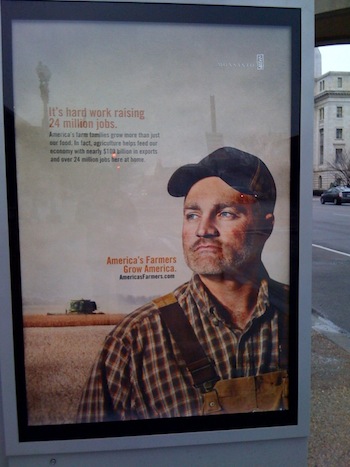 KT: Now that the Supreme Court has declared that corporations are people, too (happy birthday, Citizens United!), Monsanto is apparently out to put a friendly, slightly weatherbeaten, gently grizzled face on industrial agriculture (see above photo, taken at a DC bus stop just outside USDA headquarters.)

This guy looks an awful lot like Henry Fonda playing Tom Joad in The Grapes of Wrath, which seems only fitting since Agribiz may be helping to create a 21st century Dust Bowl.

After decades of boasting about how fossil-fuel intensive industrial agriculture has made it possible for far fewer farmers to produce way more food, Monsanto is now championing the power of farming to create jobs and preserve land. Does this attempt by a biotech behemoth to wrap itself in populist plaid flannel give you the warm and fuzzies, or just burn you up?

Dr. Nestle: This is not a new strategy for Monsanto. Half of my book, Safe Food: The Politics of Food Safety (University of California Press, 2010), is devoted to the politics of food biotechnology. I illustrated it with a Monsanto advertisement (Figure 17, page 182). The caption may amuse you:

In 2001, the biotechnology industry's public relations campaign featured the equivalent of the Marlboro Man. Rather than cigarettes, however, this advertisement promotes the industry's view of the ecological advantages of transgenic crops (reduced pesticide use, soil conservation), and consequent benefits to society (farm preservation). In 2002, a series of elegant photographs promoted the benefits of genetically modified corn, soybeans, cotton, and papaya.

Last year, Monsanto placed ads that took its "we're for farmers" stance to another level:

9 billion people to feed. A changing climate. NOW WHAT?
Producing more. Conserving more. Improving farmers' lives.
That's sustainable agriculture.
And that's what Monsanto is all about.

That's sustainable agriculture? I'll bet you didn't know that. Now take a look at the Monsanto website--really, you can't make this stuff up:

If there were one word to explain what Monsanto is about, it would have to be farmers.

Billions of people depend upon what farmers do. And so will billions more. In the next few decades, farmers will have to grow as much food as they have in the past 10,000 years - combined.

It is our purpose to work alongside farmers to do exactly that.

To produce more with less, conserving resources like soil and water.

And to improve lives.

We do this by selling seeds, traits developed through biotechnology, and crop protection chemicals.

Face it. We have two agricultural systems in this country, both claiming to be good for farmers and both claiming to be sustainable. One focuses on local, seasonal, organic, and sustainable in the sense of replenishing what gets taken out of the soil. The other is Monsanto, for which sustainable means selling seeds (and not letting farmers save them), patented traits developed through biotechnology, and crop protection chemicals.

This is about who gets to control the food supply and who gets to choose. Too bad the Monsanto ads don't explain that.