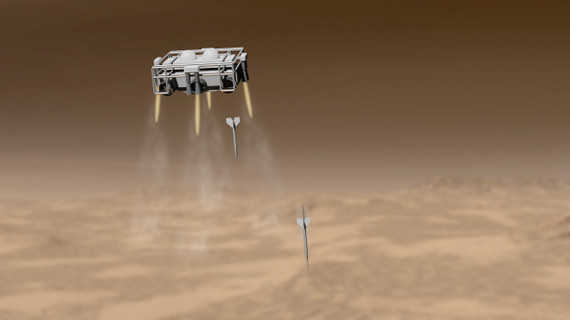 A fleet of silver arrows soars overhead. From the freezing ground below, the needle-like spears glimmer in the sunlight. They slice the atmosphere releasing sound waves where none existed moments earlier. The first dart lands, piercing the ground. A second falls hundreds of meters further on; a third somewhere in the distance. An explosive blast sounds and is carried miles through the thin air. The arrow finds its mark 1-2 meters underground. Mechanisms within the arrow deploy. Chambers fill with soil and mix with radioactive broth.

While this scenario sounds like an attack by weapons of mass destruction, it's quite the opposite. It's the search for life. Life as we've never known it. Life on Mars.

This scene is what it might look like on Mars if we deploy the sophisticated scientific equipment designed to settle, once and for all -- and with all the implications it entails -- whether there is life on Mars. And these high-tech darts aren't science fiction. They can be built today. They can be ready for deployment by the time the next Mars lander takes flight.

Make no mistake: life on Mars is not little green men. If life exists, it is bacteria that make their living off the sparse Martian environment. If it exists, Martian life will probably remind us of organisms that live deep in frozen lakes in Antarctica. In fact, the life forms on Mars and Earth may be related. Finding out is part of the mission of the silver arrows.

But, first, does life exist on Mars?

The scientific debate over life on Mars stretches back decades. In 1976, during the Viking Missions, environmental engineer and microbiologist Gil Levin performed experiments at both Viking landing sites that he still believes show proof of life on Mars. Similar to monitoring done by public health departments to monitor water supplies, Levin's device mixed nutrient-laden fluids with the scrapings from the Martian soil. The slurry produced gases, just like metabolizing bacteria would on Earth. As a control, the soil was baked, and under those conditions, no gases formed. Evidence, Levin says, that the living Martian bacteria were cooked along with the dirt.

Contradicting Levin's claim was another finding from the same Viking mission. Soil samplers detected no organic molecules. Evidence, say the majority of space scientists, including NASA's Mars scientist Chris McKay, that Mars is a sterile planet. To explain Levin's result, McKay says adding nutrients to Martian soil triggered a chemical reaction that released gases, and nothing more. Levin counters that no known chemicals stop operating when baked to the temperatures of his Viking controls.

Through the decades, the Viking data have been contested, reanalyzed, and contested more. New evidence from the Curiosity missions buoyed both sides. Liquid water, a prerequisite for life, surely exists on Mars. But the few organic molecules identified so far are too simple to indicate life.

In the space science world, the years have cooled emotions, but the question of whether or not there is life on Mars only looms larger. And both sides are now determined to find the solution. Chris McKay and Gil Levin have shaken hands on the court on which they volleyed objections for so long. McKay now embraces Levin's concept of high-tech silver arrows that can be shot into the surface of Mars, probing for signs of life.

Unlike the earlier Viking experiments, this new instrumentation is designed to give unequivocal answers. A trick of chemistry called chirality is the secret. Many chemicals, nutrients included, come in two forms that are identical down to the atom, but they have different construction. They differ like your two hands -- mirror images, identical in composition, but not superimposable.

Life on Earth harvests energy from sugars and structure from amino acids of only one chirality each, called "right-handed" for sugars and "left-handed" for amino acids. This makes common sense, and thermodynamic sense. A living organism would have to construct twice the molecular machinery to use both chiralities. Scientists expect that life anywhere will be chiral, although not necessarily with the same chirality as on Earth.

The arrows destined for Mars will contain sugars and amino acids, like Gil Levin's Viking experiment did. But, they will separately contain both left- and right-handed versions, each tagged with different radioisotopes. If both chiralities produce equal amounts of gas, then the victory will fall to Chris McKay's sterile planet hypothesis. Chemicals react equally with left-handed or right-handed versions of any chiral compound.

On the other hand, if only one of the chiralities makes gas, that's strong evidence that the metabolism of Martian bacteria did the work. What's more, if the Mars microbes prefer the opposite chiralties to those on Earth, it signifies that the two forms of life evolved independently -- a compelling argument for the evolution of life in other places throughout the universe. Similarly, if the microbes of Earth and Mars produce gas of the same chirality, it suggests that the bacteria are related -- lending credence to the recently proposed theory that Earth's life originated on Mars.

But the scene envisioned in the opening of this article, one that literally aims to answer whether Mars is alive, is not happening. Our science program's search for extraterrestrial life has become mired in policy and, like our Congress, seems uninspired to do much about it. Currently scheduled missions to Mars are only tasked with finding ancient remains or habitats suitable for life.

McKay and Levin have been able to do what Congress has not. They have agreed to maintain their differences, but to act cooperatively anyway. Along with the non-profit ExploreMars.org, they have joined in initiating a Indiegogo campaign to fund the trailblazing arrows. Using crowd-sourcing, they plan to develop, test, and manufacture a turnkey package ready to deploy the instant room is available on any Mars-bound vehicle.

And they are asking us to follow their lead, to leave behind the government's deadlock and be a part of answering one of the biggest questions of all time: "Are we alone in the universe?" 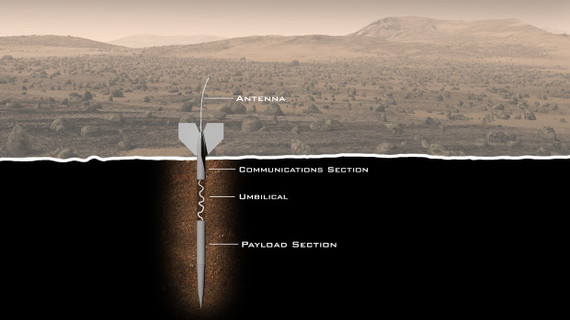 Science writer based in Austin, TX with a background in math and ocean science who writes on physics, geology and the environment.