With controversy still swirling around the film Zero Dark Thirty and its misleading suggestion that torture put the CIA on the trail of Osama bin Laden, it's time to take the tools of filmmaking into our own hands to refocus the discussion on why torture is always wrong.

Many in the intelligence community - including former CIA and FBI agents with firsthand experience with interrogations - have spoken out about the film's inaccuracies, the fact that real intelligence is better produced through humane and lawful interrogations, and the fact that torture almost always leads to false information. But that's a message that is likely lost among most viewers, especially because the film opens with the words, "Based on Firsthand Accounts of Actual Events."

Of course, it isn't Hollywood's job to get history right. But, the reality is that some of the truth about torture is already out there: in declassified government documents, in prisoners' testimonies, and in the words and actions of courageous American service men and women who have spoken out against the so-called "enhanced interrogation program."

And as citizens of conscience, setting straight our country's legacy of torture is a responsibility we should all want to share.

The good news is that all Americans can be part of another Hollywood film that seeks to shed a light on the truth about torture after 9/11: Reckoning With Torture.

The project is a joint collaboration between Doug Liman - the director of Fair Game, The Bourne Identity, and Swingers - the American Civil Liberties Union and the PEN American Center.

We're asking all American to join us and do what our government has failed to do so far: to tell the truth about the scope and the human cost of American torture after 9/11.

And all you need is your smart phone or a webcam.

To participate, visit www.ReckoningWithTorture.org and choose a document to read from our script. The readings range from Department of Justice legal memos that purport to justify torture to a prisoner's firsthand account of abusive treatment in a CIA black site prison overseas.

Once you've chosen a document, simply record yourself (or a friend) reading it aloud. When you're done, send us the footage. That's it.

Hundreds of Americans - from California to Florida and everywhere in between - have already joined our movement. Each American who adds his or her voice to the project provides another opportunity to reflect on our country's own legacy of torture, and the need for accountability to ensure that torture is never again repeated in America's name. The final film will feature the faces and voices of Americans from all walks of life, alongside high-profile cultural figures, reading from the documentary record. These individual acts of reckoning will be spliced together with exclusive interviews with those who know the torture program best: the prisoners who were subjected to it, and the brave American men and women in the intelligence community and the military who resisted it. Our film will tell a story about torture that you won't see in Zero Dark Thirty, or anywhere else.

Now more than ever, Americans must come together and send a message once and for all that torture is immoral, illegal and ineffective. We hope you'll join us. 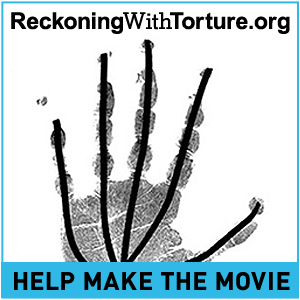