I work in my salon until late afternoon, dash home, then prepare for an evening at the Taschen launch party for Norman Mailer/Bert Stern's Marilyn Monroe book. It's Dec 6th, 2011. I haven't seen Bert in over 40 years.

I arrive in all black -- and black isn't the new pink or purple, black is black... like 60 isn't the new 40, it's still 60. I add a splash of holiday cheer with my vintage green satin and velvet high heels. Chad Simpson, my partner in hair for 20 years, is my escort. He's thrilled, wearing all black, and has specifically pulled his Alexander McQueen shoes out of his vault for this special occasion.

We pull up to the legendary, and newly refurbished, Hotel Bel-Air, the last place Marilyn was photographed. Many of my clients have been complaining lately about the hotel's new sleek décor -- as opposed to its old quaint look -- while having their Wolfgang Puck lunch, but as we walk the footbridge to the party's entry surrounded by giant palms, fig and ficus trees, ferns and flowers, I see the supersize white swans posing below in the spotlight on the lake. They look the same as they did in the 70s.

Aloma Ichinose, my best friend, a former model herself now turned photographer, arrives. We look at the display copy of this book of rare Marilyn portraits.

I breeze through the fringe of guests sipping their champagne, until I'm drawn like a magnet to the striking Peggy Moffit, the model from my first Harper's Bazaar job, flawless in Pucci and in her same signature Sassoon cut. She introduces me to her handsome son, Christopher Claxton.

Minutes later, it's the moment we all came for. Lawrence Schiller introduces the man of the hour, Bert Stern. All chatter halts. Bert looks great, dressed in a navy jacket and pink Brooks Brothers looking shirt. His mood reflects that of an old school New Yorker, tortured to be in L.A. He also seems shy. He ends giving the crowd a chuckle by saying simply, "I like photographing beautiful women in beautiful hotels."

Afterward, no one rushed him from the surrounding audience so I took the lead and walked directly to him, then I lean in and whisper, "I did Vanessa Redgrave's hair for your amazing headshots in Vogue 1968." He looks at me. I smile and eagerly wait for a response. It is obvious he has no recollection of me, even as he recalls the shoot.

Aloma cuts in, swooping me off into the arms of Penelope Ann Miller, the child of a longtime client and someone that I have known since she was three. She is starring in the new critically acclaimed film, The Artist. I remember in the early 80s when her mother told me, "My little Penne wants to be an actress..." I told Bea Miller, "Well, she's in the right town for that."

John Rabe from KPCC comes up to us and we do an interview together, Penelope about her wonderful new film and me on my history in this town. We were both speaking on the same theme, Hollywood days that will never return.

Oh, which reminds me, my next big hello.... my pal, model agent Ric Ferrari is with his client, the fabulous Julie "Catwoman" Newmar, whom I've never met before. We bond on the subject of her hair. And she will be coming in for a new look soon.

I zoom over to my beloved Quincy Jones. I get a big bear hug.

"What's going on, girl?" Quincy asks, all Marvin Gaye smooth. Quincy and I have been friends since 1970. We've been through a lot of music, marriages and children. I light up like a Christmas tree anytime of the year when I get to be with him. He is sitting with a very good looking dude. "Chris, Carrie. Carrie, Chris."

I stare at him. I'm trying to figure out why this guy looks so familiar. Then my head explodes: "Chris... Holy crap! That's Chris Tucker! I love Chris Tucker!"

I want to spend the rest of the evening with all of them. But I'm not the new 40, and I had heads to cut in the morning. 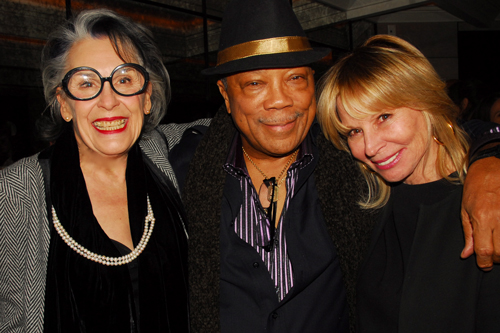