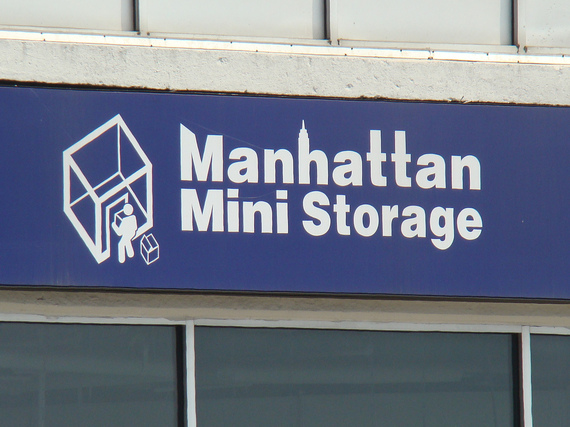 Manhattan Mini Storage's bold advertisements are expected, but one of their recent "Storage Space Love Stories" is worthy of more conversation than it's provoked. The image is all over New York City's MTA-- a transgender woman, or male drag queen, poses by a vanity with furs and wigs surrounding. The caption reads, I Like My Wife and Kids, But I Love My Storage Locker.

The message, at first glance, which is the immediacy in which an ad is meant to resonate, in many ways seems to ask, what better place to be in the closet than in one of these storage containers? 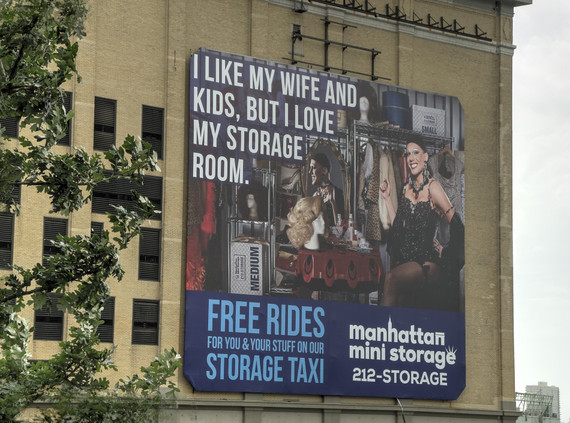 Assuming that the highly visible company isn't promoting the repression of gender identity, they are reputably pro-LGBTQ, it's fairly apparent that the tagline is either meant to read in jest, or provoke some sort of cheeky concept that is somehow more liberating than demoralizing. It's just too ambiguous to tell. Perhaps an out-and-comfortable man may see this ad and think, yes! Perhaps a quiet, confused boy will see it and think, this is where truth lives, in these magnificent, free, hidden spaces.

Pure speculation. But, considering the possibility, why not elaborate on the less-than-sensitive message force fed to New Yorkers everyday?

Google this advertisement. There's little out there. In a time where Caitlyn Jenner is on the cover of Vanity Fair, and Amazon's Transparent is winning Golden Globes the conversation is clearly happening. This ad, which can easily be taken as trivializing the struggle of freely embracing one's gender identity, is just not part of it.

Manhattan Mini Storage, who create their ads in house, views the work in a more elaborate light. Their blog explains that the image is of a self-proclaimed glamorous queen named Tipsy von Tart who uses the storage space as, "a place for me to store my drag." The character bio also says that Tart lives with two other queens in their Hell's Kitchen three-bedroom walk-up creating an overarching picture that shows signs of a closeted life and an open one. Taking it further, the last sentence reads, "You want to know if I really have a wife and kids, like the ad says? Well, maybe I do, and maybe I don't. A girl's got to have some mystery about her."

It's tough to tell if this is a bid for Manhattan Mini Storage to avoid being called out for joking about closeted-struggling-transgendered people. There is none of that backstory on the subway. The only information viewers get is that this person has a wife and kids, but feels a greater passion for this hidden collection of feminine clothing and accessories. With zero affirmation of this developed-complex character, an average commuter could simply see herself, a brother, a father, a lover, or a friend.

How may this ad relate to people who connect to it? Is there some suggestion that it's fun to keep yourself hidden? Does it provoke a Pandora's box worth of questions and emotions that extend beyond an ad that's brash for the sake of being brash? Could it make people feel sad or confused?

Only street artists, advertising creatives, and New York City businesses curate the aesthetics and messages displayed about town, but people's feelings should still be considered. Do Manhattan's millions of daily commuters want the meaning of identity questioned, and arguably trivialized everyday on their morning commute?

We're already bombarded with an astonishingly gorgeous Jessica Alba in a tight-white dress telling us to Flourish from the Inside Out, and Feel Beautiful on the Inside in a Vita Coco ad. Interesting copy-image combo.Then there are the absolutely brutal Proteinworld.com posters asking, Are you Beach Body Ready?

In a day and age where advertising is more in the hands of the consumer than it's ever been, these preconceived ideas of identity are still force-fed to the masses. It's American, and everyone's used to it, and a simple shoulder shrug and turn of the head can be enough to deter any sort of fundamental disagreement with an advertisement. Although many of the dozens of millions of New York commuters are disenchanted with media, it's still bound to touch at least a few souls.

So, we can look at the Manhattan Mini Storage Ad and say, Fuck this, let's put something less confusing and offensive in front of our daily commuters. Or, we can shrug our shoulders, say that those who find it offensive simply don't get its humor, and be on our merry way to the office.