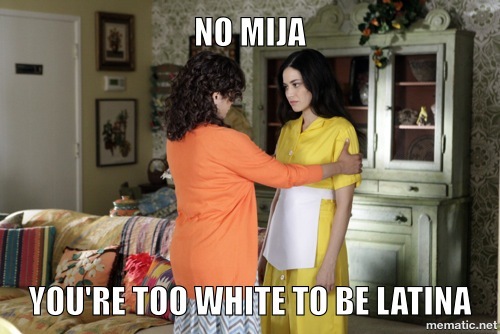 True equality is a fleeting concept in today's media environment. As a Puerto Rican, I am reminded of this daily. We're quick to preach about diversity, but do little to actually live it. As a culture, we can do without othering from within.

We must do better.

In a community our size, there are uniquely Latino issues that merit attention and constructive dialogue. Caucasians have no standing in these debates, nor do Americans of African descent. Latinos have a responsibility to encourage the free exchange of ideas. This is especially true in the 21st century.

Latinos have unarguably been oppressed and discriminated against by all facets of society, especially the media, for an inordinate amount of time. Latina women are pressured to straighten their hair, or paste in eyelashes to look more white. Reggaeton has been hijacked. Chains dilute dishes rich in Latino culture into barely palatable fast food. Latino men are trivialized as actors despite having superior acting ability, and take a backseat to white and black actors. Latinas are objectified and even abused, viewed as nothing more than sexual objects for white men. And in politics and government, fellow Latinos and Latinas are told to be quiet and "stop being so loud" so white men and women can define our culture.

Oppression is real and it is everywhere. This is not in contention and when it comes from within the culture, it is unforgivable. And it must be confronted.

Imagine my surprise, then, when the idea Latinos cannot be a "true representation" of our own ethnicity without being a specific hue was advanced by activists on social media. This way of thinking is unhelpful and enormously destructive to Latino culture. All Latinos are unique, all Latinos are beautiful and we should never be ashamed of our skin tone, our culture, or our identity.

Promoting inequality is ethnically irresponsible, and only by confronting and rooting out inequality within our own ranks will we progress as a culture and as Americans.

While there are great organizations, like Latino Equality Alliance, that promote true equality and understanding they are few and far between. Latinos are either oppressed by Latino 'struggle rappers' placating the establishment, or groomed to act properly by non-Latinos ("try not to be so...well spoken", I was once told by a straight black woman working at a major political magazine in Rosslyn Virginia).

As an American and a registered Democrat, I was shocked to see Latino social media activists criticize a Latina who votes Republican and is intimately involved in a number of Republican causes. This harmless factoid prompted a less prominent activist to proclaim, "I will no longer engage conservatives. Let alone conservative Latinos. You're on another level of oblivious."

To any political strategist from either party, this is an outrageous and vapid assertion.

@brittnotbrit @robertcaruso LOL I will no longer engage conservatives. Let alone conservative Latinos. You're on another level of oblivious.

The attitude on display here is reckless, it is irresponsible, and and it is wrong. In fact, the author sounds not unlike Caucasian oppressors of yesteryear, ravaging The Island for conquest. Besides the obvious sexism implied in the tweet displayed above, it is never acceptable to be told your culture is inferior. And certainly not by a Latino man to a Latina woman.

True equality is accepting diversity and welcoming it, not oppressing from within. That is what Communists do. Inequality is what al-Qaida and Iran thrive on--I have fought both. Inequality does not belong in American discourse, particularly when promoted as a way to equalize what it means to be Latino in American media.

One would think progressive outlets would be the most welcoming of multiculturalism, diverse voting and sexual preferences, cultural integrity, sexual justice, and equality for both men and women. Unfortunately, that does not seem to be the case. As a registered Democrat, I encourage progressive organizations to take corrective measures. Support the inclusion of authentic Latino and Latina voices whenever possible.

All inequality, inside and outside of Latino culture, should be met with force. Namely, the force of wisdom, force of equality, and force of words. No one will define me or tell me what it means to 'be Latino'. Will you?

Let's have a discussion about equality, and start with ourselves. I am not a coconut, and neither are you.