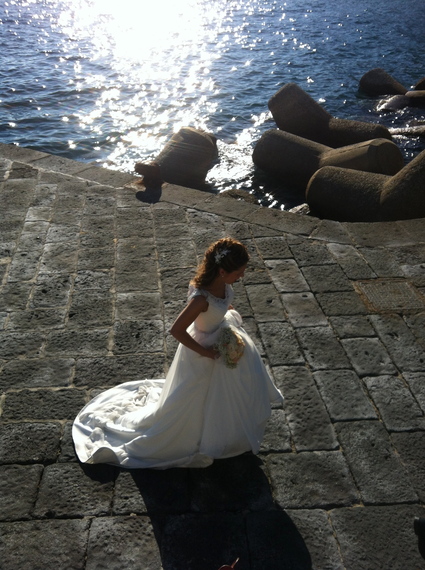 I met my first husband when we were in our early 20s, and I thought he was a young god. But when we married, neither of us was prepared. His father had died when he was 4, and his mother when he was 12 -- and there were no strong role models for him for how to be a husband. And the only thing I'd learned in my high school Home-Ec class was how to sew an apron and hand wash pantyhose.

So I'm a big fan of relationship and marriage training in high schools. Otherwise, couples can be impeded from the start.

We were volunteering on a kibbutz in Israel, picking oranges and seeing the sites, when we found out I was pregnant for the first time. I waited in our bungalow while he went to the nurses' station to hear the test results -- and they said he nearly fainted. We felt like children having a child. A decade and two more children later, we divorced.

Why do we experience conflict?

Most of us start life joyfully, and everything we do feels wonderful -- until our adults begin to rein us in. And when their approval becomes dependent on whether we're "being good," we learn to suppress our unlovable aspects. Eventually, we grow up and find romance. And right away, we feel sexier, funnier and smarter. And we mistake that for the original joyfulness we felt when we were small. Over time though, our partners begin to act differently, and we start to resent qualities in them that we used to adore. They don't give us what we need to feel whole again, so we blame them. Old hurts are reactivated, and our disillusionment turns to anger. Power struggles take hold, and neither of us is willing to end them.

And there you have it -- daily conflict.

Here's the good news. Conflict is normal and natural. In fact, it's what's supposed to happen. It's proof that our relationships are on the right track because conflict is meant to help us heal our issues -- which means that switching partners isn't necessarily the best answer.

What's most important when resolving conflict?

It means saying: Yes, there's a problem, and yes, we'll do whatever it takes to resolve it. Then we're more than halfway there! Without these two Yeses, it probably won't go well.

It helps to ask solution-oriented open questions: "What can I do to help? What do you expect from me? What can I expect from you?"

It won't work if our motivation is to get our partner to change. But if we begin with "How can I change?" our partners will change along with us.

Then all we have to do is agree on what actions to take, and keep the agreements.

What about when we're just super angry?

One of my girlfriends married a man simply because he proposed. The relationship was troubled from the wedding night and spiraled down from there. The two of them went years without connection, affection or intimacy. And she stayed for the health insurance.

She blamed her frustration and anger on him. And for years, she thought her feelings of unworthiness were a result of the marriage. I was sitting with her one day, listening to her talk about all of it, when she had a kind of epiphany. She realized that the opposite was true -- that the state of the marriage was a result of her feelings of unworthiness. Feelings that she'd been carrying since childhood when her grandmother convinced her that "boys are valuable, but girls are not."

This was huge -- but what would she do with it? First, she decided to stop settling, which required new beliefs -- that she was deserving and that she was capable of providing for herself, including being able to pay for insurance.

Then she decided to change her focus from escaping from a messy marriage to moving toward a joyful future. That required stopping all the blame, criticism and condemnation.

Then she was finally able to let her husband off the hook. And that opened the door for them to build a healthy marriage.

Our anger points to a need that we're making someone else responsible for filling. If we stuff anger down, instead of examining it to see what the message is, it will keep showing up and grow more destructive.

Making our partners responsible for taking care of our needs -- and building expectations that turn into shoulds, and then demands -- doesn't work. When we choose anger to manipulate our partners into doing what we want, missiles fly. And no one's needs are met.

Follow these steps, after you get the two Yeses.

• Ask your partner to sit down with you to talk about the issue when it's not heated and you're both calm.

• Agree that criticizing, complaining, nagging and blaming are off-limits.

• Don't talk about the past, and avoid saying always, never and you.

• Find out what your partner needs.

• State your need, and explain why it's important to you.

• Focus on a solution that works for both of you. When we focus on what's going well, what's not can transform.

• End by expressing appreciation -- and hug it out.

Issues aren't necessarily resolved overnight -- or in an afternoon, sitting on my mom's wraparound porch. My girlfriend and her husband are still working stuff out. But she finally shined a spotlight on a dark corner inside herself. And because she did it, sometimes he feels brave enough to do the same. And together, they're moving forward.

We all deserve to live in peaceful households, where conflict is faced and resolved as soon as it comes up -- and we're all capable of making that happen. When we're willing to do whatever it takes, we're more than halfway there!

For more posts by Grace, visit her blog at gracederond.com. This article was originally featured on The Good Men Project.