As defeated Democrats mull over what slogan can equal or overcome President Trump's "Make America Great Again", I have a suggestion, one that might even enthuse populist Republicans. Let's make American more equal again, just as it was in the 1960s and 70s, when we had a thriving middle class in which its children could hope to exceed their parents' station in life.

After all, it was our thriving middle class that kept the more extreme elements of both political parties and persuasions at bay, so that Republicans and Democrats actually talked to each other. And a middle class will only thrive where there is less income inequality, something that most well-meaning Americans support.

But that was then and we live in now, when most children of the baby boomers retiring do not hope to do better than their parents. Household incomes have stagnated since the 1970s, and the top income earners since the Great Recession now have garnered almost all of the increase. 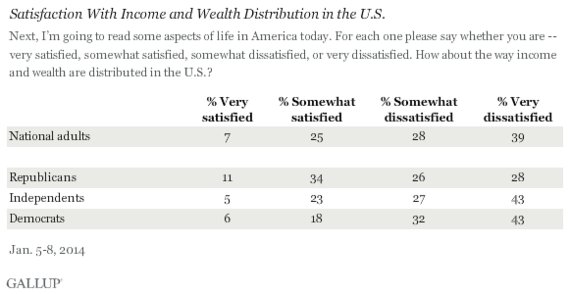 It's why two out of three Americans are dissatisfied with the way income and wealth are currently distributed in the U.S. This includes three-fourths of Democrats and 54 percent of Republicans, according to a recent Gallup poll. The Great Recession was brought on by Wall Street's excesses, and the deregulation boom of the Clinton and GW Bush presidential reigns. So why not create programs that Make America More Equal Again? 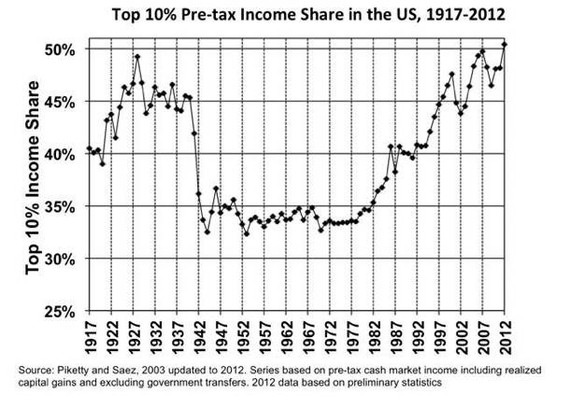 Overall, the share of Americans living in middle-class households has declined from 61 percent in 1971 to 50 percent, reports a recent Pew Research study. The hollowing out of the middle class has been a source of consternation among many economists, politicians and the public at large, says those surveyed. They say as Americans move toward the economic extremes it is harder to find common ground, and a common sense of what it means to be an American.

Much of that inequality is in the Midwestern rust belt states that lost those blue collar manufacturing jobs during the globalization and multi-nationalization of US corporations that President Trump promised to bring back again.

So President Trump was no dummy in recognizing this fact. Then how could Democrats be so blasé and oblivious to this fact among their former supporters? Everyone saw it coming; the disenfranchisement of whole segments of working class voters that had descended into depression and drug use in those formerly blue and Democrat-voting states.

There have been many suggestions of how to bring back higher-paying jobs, but candidate Trump seems to have fastened on just three--building more infrastructure, destroying multi-lateral trade agreements like the TPP and NAFTA, as well as limiting immigration inflows to make more jobs available to those suffering American workers.

The first suggestion has been backed by both Democrats and Republicans, and now that President Trump wants it Republicans will stop opposing infrastructure spending, even if it busts the federal budget.

However, building more immigration and trade barriers won't create greater equality, nor will opposition to minimum wage laws, such as advocated by the Trump pick for new Labor Secretary--CEO of fast food chains Andrew Puzder. Because most immigrant jobs are low-paying, jobs that Americans don't want anyway. And higher trade barriers for the purpose of bringing jobs home will raise the prices of imported goods, cancelling out much of the income boost from higher-paying jobs.

What won't work either is the blatant voter and collective bargaining-suppression laws enacted, or about to be enacted in the 25 all-red states with absolute Republican majorities. Such a blatant suppression of minority voters and the wages of working class Americans will further suppress their wages, hardly the road to greater equality.

And any attempts to destroy Obama's Affordable Care Act that have boosted the buying power of at least 20 million working class voters by reducing overall medical costs, won't work either, as well as Dodd-Frank regulations that have suppressed some of the excessive profit-taking of Wall Street at the expense of State Street.

The same poll updated a long-time Gallup trend, finding that 54 percent of Americans are satisfied, and 45 percent dissatisfied, with the opportunity for an American "to get ahead by working hard." This measure has remained roughly constant over the past three years, but Americans are much less optimistic about economic opportunity now than before the recession and financial crisis of 2008 unfolded. Prior to that, at least two in three Americans were satisfied, including a high of 77 percent in 2002.

So there are many reasons for Democrats and even truly populist Republicans to support programs that increase income equality. But they can't be about building more walls. A robust and more politically temperate American middle class can only include Americans of all nationalities and ethnicities.