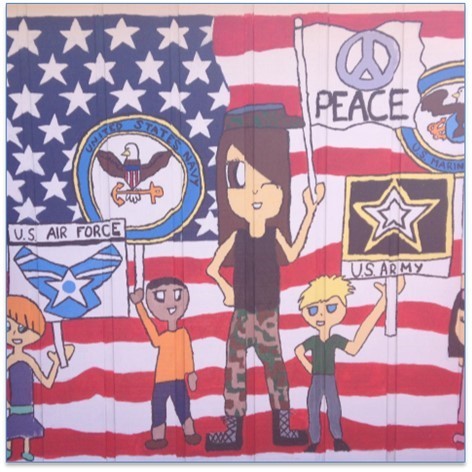 In the weeks before Veterans Day, one of the assignments I give my USC graduate students who are preparing to become school social workers is to organize an activity that involves schools in honoring those who have served our country. The Military Child Education Coalition estimates that close to four million children of veteran and military families are currently in our public schools. After 13 years of war, many deployments, multiple school transitions, and now with our troops fighting ISIS and the spread of Ebola, this type of recognition by civilians within a school is meaningful to the children of military members and veterans who attend public schools. These gestures also educate millions of civilian students, staff, and parents about the sacrifices of our troops and veterans.

In the public schools where my students are completing their internships, this activity can be implemented in a variety of simple, yet straight-forward ways. It might include inviting a veteran to speak to students, sharing special announcements over the speaker system or even asking students to bring in photos of active duty service members and veterans in their families to post in the hallways--what one school described as a "pride board." One MSW student is working with elementary school students to write letters or send care packages to military members who are currently deployed. Other graduate students have helped organize school-wide assemblies with music and colorful military presentations. These school-based celebrations send a message to the civilian and veteran population that we are grateful to those who have sacrificed so much for our freedom and recognize the children of military-connected families, including post-9/11 veterans.

Our interns have done this now for many years in a consortium involving eight San Diego region school districts with hundreds of students in public schools participating in celebrating our nation's warriors. These districts are near bases and regularly celebrate military and veterans' contributions. We highlight them on our website, in our newsletters and in a collection of guidebooks we published to give schools strategies for how to create a school culture that supports military-connected children and families. Our research also suggests that creating welcoming environments in which public school educators are sensitive to military students' needs and circumstances can help to increase resiliency.

So imagine how shocked I was, this year, when several civilian school principals in the Los Angeles County region not located near many bases took offense with this assignment, even though Veterans Day has been a national holiday since 1938. One principal was seriously concerned that we were violating the confidentiality of families by asking them for photos of family members or by inviting veterans to speak at school--as if being a military or veteran family is a clinical, psychological, or medical condition. I responded by letting her know that sharing photos was completely voluntary for veteran and military families and we've had a good response from many proud and thriving veteran families in the past. Another administrator was concerned that recognizing Veterans Day would take time away from academic learning in the classroom. I argued that recognizing veterans has cultural, historic, and civic value and helps schools fulfill their mission of educating children.

Another administrator argued that he did not see any reason to make Veterans Day a "big deal" since his school did not have any military or veteran children. I responded that, according to a recently released report by the Center for Innovation and Research on Veterans and Military Families, the Los Angeles county region has more than 325,000 veterans and another 12,000 veterans return to this area each year. They and their children become invisible in large metropolitan school districts.

That's why the Los Angeles Unified School District (LAUSD) this year became the first large urban school district in the nation to begin asking whether students are in a military or veteran family when parents fill out emergency information cards. Now they will know where these students attend school and offer the support they need. Imagine a child who has already been to five or six schools and might only see his military or veteran parent for a few months at a time. Then imagine how meaningful it would be to that child to be asked to share a photo of that parent or to see flags raised in honor of those who have served. LAUSD is only one of 81 school districts in Los Angeles County so more needs to be done by other districts in the Los Angeles area, across California, and large urban cities across the nation that have large numbers of veteran families now integrating into civilian society.

Like LAUSD, some school districts and states are beginning to ask military and veterans' families to identify themselves--either by adding the box to check on their emergency information cards or by creating a military identifier in their student information systems. As many as 10 states are already taking legislative steps to encourage military-connected families to identify themselves. This will help raise awareness, direct needed resources, create more culturally sensitive schools, and support children of veterans who unlike children from military families with Department of Defense supports, have almost no supports from the Veterans Administration.

But clearly, these policy changes--and the reasons why they are important--are not filtering down to many public schools. Service members are part of our past, our present and our future. We can't predict where or even how they will be needed next. In fact, there are new reports that up to 4,000 troops will be helping in the battle to eradicate Ebola, and then they may be quarantined for more than three weeks after returning from West Africa. How will this affect these soldiers and their families? We can, and should, create schools that are welcoming and supportive of the children who must frequently adapt to new schools, new peer groups and have one or both parents deployed around the globe.

Why have a national Veterans Day if large numbers of urban public schools just ignore its purpose, which is to openly and unabashedly celebrate all those who served and are serving our country? Their children and families have served too! Veterans Day is for all Americans to stop and thank those who have, are or will serve to protect the freedoms we enjoy. All schools can and should celebrate Veterans Day whether or not they have any military-connected children. It's not just about having another day off from work. It's about honoring those families that have endured, been resilient and contribute greatly to our society.