The Academy of Pediatrics recommends that women breastfeed their children for one year, citing numerous health benefits for both mother and child. However, the dearth of lactation spaces on many university campuses makes it difficult for women, particularly graduate students, to continue breastfeeding after returning to work. Despite existing laws requiring lactation spaces and pregnancy accommodations, the vagueness of these statutes, coupled with the grey area of graduate students' status as employees, makes these laws difficult to enforce. This ultimately makes universities less accessible and desirable for women who don't want to, and shouldn't have to, choose between motherhood and academia. 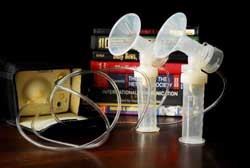 To be clear, I'm not talking about the right to breastfeed in public, but the right to pump breast milk in private. Even the pope is on board with breastfeeding in public. When breastfeeding, a mother cradles her child in a pieta-like pose. Breast pumping, on the other hand, is anything but glamorous or natural. It involves stripping half-naked, entangling oneself in a mess of cords and tubes and attaching your breasts to a loud and uncomfortable machine. And yet, as long as doctors recommend that women breastfeed for a year, but they have to return to work after six weeks (if that), women will need to find ways to pump breast milk at work, and on campus.

The lack of space to pump is a recurring problem for graduate student mothers. While faculty generally have their own offices, few graduate students have access to a private space. Although many universities have a small number of lactation spaces, those rooms are often overcrowded and inconvenient.

As a PhD student who has recently returned to campus after the birth of my daughter, this affects me personally. The first time I needed to pump on campus, the closest lactation room was 10 minutes away. When I got there, the room was booked for two hours. Imagine having to walk across campus every time you have to go to the bathroom, only to find it locked. For hours. Pumping breast milk is a physical necessity, and it is timely. If women don't pump, or have to wait for a room to open, they can become engorged, which is painful, and can leak all over their clothes, which is embarrassing. Women typically have to pump 2-3 times during an 8-hour workday.

Without university-provided spaces, women are left to fend for themselves in their departments, having to ask around for empty rooms, in some cases from their colleagues or superiors. This puts women in the awkward position of asking for a favor, and many women may not want to because they are afraid that bringing up the issue of motherhood makes them seem like a less serious scholar. As testimonies posted on the Northwestern Student Parent Alliance website show, women are pumping in their cars, in bathrooms, or they give up on breastfeeding altogether, even though it is not their preference to do so.

The lack of places to pump ultimately limits nursing women's access to the university. Women have classes and meetings all over campus, and we need to be able to count on having spaces to pump. Most importantly, these spaces need to be signed and posted online so women know where they are. Think of lactation rooms as similar to wheelchair-accessible parking spaces and bathrooms. Yes, they may be empty much of the time, but for the person who really needs them, knowing those spaces are there and available is what makes the university an accessible place.

The Affordable Care Act requires that employees must "provide a place, other than a bathroom, that is shielded from view and free from intrusion from coworkers and the public, which may be used by an employee to express breast milk." Many states, including Illinois, provide this protection as well. While these laws protect university faculty and staff, they do not cover students because we are generally not considered employees.

Title IX does apply to students. Better known for prohibiting gender discrimination in athletics and cases of sexual assault, this 1972 law also contains a clause banning discrimination against pregnant or parenting students. It says schools must "provide you with reasonable adjustments [...] when necessary because of your pregnancy." Lactation space is arguably a necessary accommodation due to the medical condition of pregnancy, but the law's language is not explicit. Furthermore, few Title IX coordinators are aware of this clause and few universities pay attention to it. California recently had to pass a separate law that requires colleges to adhere to Title IX's pregnancy discrimination clause.

In the absence of clear legal protection, female graduate students can only ask that universities provide lactation spaces because it is the right thing to do.

It is no surprise then, that the resources for nursing mothers vary greatly from school to school, and there are few standards as to how convenient these rooms should be. For example, Stanford and Northwestern are approximately the same size, but Stanford has 27 advertised lactation spaces; Northwestern has only six. This, along with the absence of other family friendly policies, such as on-campus child care, or child care subsidies for graduate students, make the university a less-than welcoming space for new mothers.

Universities should do something about this problem if they genuinely care about gender equality in academia and in society as a whole. The lack of family friendly policies -- including lactation spaces -- is the number one reason why women in STEM fields decide to abandon research careers. This is a great loss not only for the students, but also for the advisers, departments and funding agencies that have invested so much time in them.

There will always be a need for lactation rooms on campus. Universities are institutions that serve graduate students, most of whom are in their child-bearing years. This need will only increase as more women pursue advanced degrees.

The resources required to make buildings accessible pale in comparison with the large-scale construction projects going on at campuses across the country. How hard would it really be to make sure every building has a small closet-like space with a table, a chair, and an electrical outlet? The question is, do universities have the will?