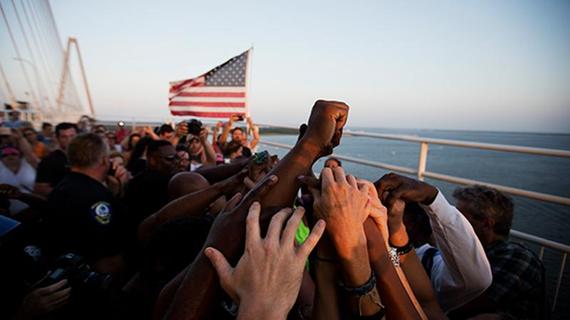 I've always seen connections between things. And the deeper meaning of things that are not things. An event, personal or historical-- an object, natural or created-- holds a deeper meaning when we are able to hear the stories underneath.

Native Americans know this, that a mountain is not a thing, but a site of history, a place where human memory is stored, as well as something deeper - the wisdom of nature that knows that the mountain is connected to the position of the sun, the movement of the clouds, and the rain that falls and freezes and runs down as rivers to the sea.

The first time I went to Latin America, I learned that because of the influence of the Catholic Church on the patterns of slavery, marriage, and property there, the land is shared like this in the minds of the people, conceptually, and held in the hands of faith.

In his recent Encyclical Letter, Pope Francis writes about "the intimate relationship between the poor and the fragility of the planet, the conviction that everything in the world is connected."

But here in the mostly Protestant United States, at least in the dominant white culture that does not question its power, this connection is something we have yet to learn.

When my daughter was little, a developer was threatening to develop a speck of woods in our neighborhood. The woods held foxes, raccoons, owls, hawks, and trees that had been there longer than the Confederate flag had been flying on top of the South Carolina State Capitol.

I went to speak to City Council on behalf of the mothers of the neighborhood, telling them that we needed these woods for our children and the generations to come.

"Correct me if I'm wrong," said one of the Council members to the developer, "but this is private property we're taking about, right?"

"Seems to me then that you can do what you want with it."

They voted unanimously to let the developer do just that, with one provision. The creek that ran through the middle of the property would have to be untouched on either side by ten feet.

A few days later, I woke to the sound of bulldozers and chain saws. The woods were history.

The night of our legal gay wedding in South Carolina, three friends helped us take the leftover food and drinks and prettily wrapped presents back to our house, and the five of us sat outside on the back deck and talked politics. Our marriage was legal in the state at the time, but at any moment, a Supreme Court ruling could come down to make it history.

Underneath the discussion of tolerance and legality was the question of race. One of the women present, my poetry publisher from New Jersey, was married to a black man and had three mixed-race daughters. You couldn't know that by looking at her.

Another woman was born and bred in South Carolina, a veteran who suffered with PTSD who had a plaque of the Confederate flag on the dashboard of her truck. You couldn't know that by looking at her.

Race runs deeper than skin. It is, like the land, something that holds history and meaning, but only if we go beyond the surface. Only if we look beyond the apparent thing-ness of it into the deeper connection between what we see and what has been constructed, chosen, kept and cut away.

These are the thoughts I was having five days after our wedding when I heard the news of the Charleston shootings.

Like the City Council members' approval of destruction in those chambers years ago, what gave rise to the Charleston shootings was in part the concept of private property. It's my land, he said. "You're raping our women and taking away our country."

For a moment he stopped. And then he cut down the trees.

We will preserve both ourselves as a nation and our dignity as human beings by seeing the connections between things. What is happening across the South right now is a witnessing of people beginning to understand the deeper meaning of things that are not things.

And yesterday's events - the Supreme Court decision that made my new marriage legal across the land, as well as the President's witnessing to the power of memory and its ability to heal us and give us hope - were momentous occasions hundreds of years in the making.

As a nation, we are beginning to see that people are not things. Yet neither are the mountains or the trees. It is all connected. We are all connected. Like the creek in my neighborhood that becomes river and flows through South Carolina and opens into the Charleston Harbor and out into the deeper sea - let's not just take it down, let's take it deeper.