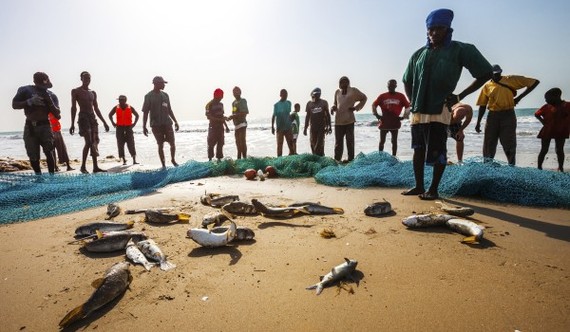 Africa's rich coastal waters have long been plundered by foreign fleets, fishing illegally. Now global initiatives are gathering forces that aim to end such plunder -- and protect the livelihoods of coastal communities. For these initiatives to succeed, however, many more countries around the world need to participate.

In the absence of effective national institutions and international cooperation, however, Africa's fishery resources have been consolidating the power and personal fortunes of ruling elites, and enriching foreign traders. West Africa alone loses $1.3 billion per year due to illegal fishing. Apart from draining the region of revenue, overfishing reduces fish stocks, lowers local catches and harms the marine environment. It destroys communities, who lose opportunities to catch, process and trade fish.

The good news is that two new international measures could halt this plunder of some of Africa's most vital resources. The first is the 2009 Port State Measures Agreement, an international treaty to combat illegal, unreported and unregulated (IUU) fishing. Thirty countries have adhered to the treaty, which became binding on June 5.

Countries that sign up to the treaty agree to prevent trawlers from offloading illegally caught fish. The treaty is a major step forward -- but for it to make a real difference, all countries need to ratify and implement it.

The second promising international measure is the Fisheries Transparency Initiative, launched recently by Mauritania, which aims at increasing the political will and international cooperation for improved management of world's fisheries. Indonesia, the Seychelles and Senegal have already joined; many more countries need to join in order to reinforce current multilateral efforts to tackle illegal fishing.

In recent years, the Africa Progress Panel has advocated strongly for sustainable fisheries in Africa. We have helped to raise awareness and mobilise the political and legal action necessary to prevent illegal fishing off African coasts and beyond. In our 2014 report Grain, Fish, Money: Financing Africa's Green and Blue Revolutions we call on governments to ratify and implement the Port State Measures Agreement.

Africa has 35 coastal nations and has some of the world's regions worst hit by illegal fishing. Africa's role will therefore be critical in pushing forward this important global agreement. At the regional level, the UN Economic Commission for Africa (ECA) has issued a policy handbook to help guide efforts by African governments to make fisheries management an integral part of their national development strategies. African governments should increase fines on vessels that fish illegally, support artisanal fishing, increase transparency, and provide full disclosure of the terms on which commercial fishing permits are issued. It's time to limit the unequal and unfair competition between industrial fishing fleets and artisanal fisheries.

Too often African nations lack the capacity to monitor and enforce compliance. They are weakened by the inaction of states that are unwilling or unable to carry out their regulatory responsibilities. A registry of fishing vessels that sail under a flag of convenience should be established, so African governments have the option of avoiding agreements with such vessels.

Some countries in Africa and beyond, including Mozambique, Senegal, the Seychelles, Indonesia and Argentina, are taking decisive action to monitor fishing in their waters. We need many more to follow their lead.

As demand for fish increases worldwide, African waters are becoming a magnet for more and more fleets from around the world. To safeguard these fisheries for Africa's people and for future generations, all countries should join the Port State Measures Agreement and the Fisheries Transparency Initiative.