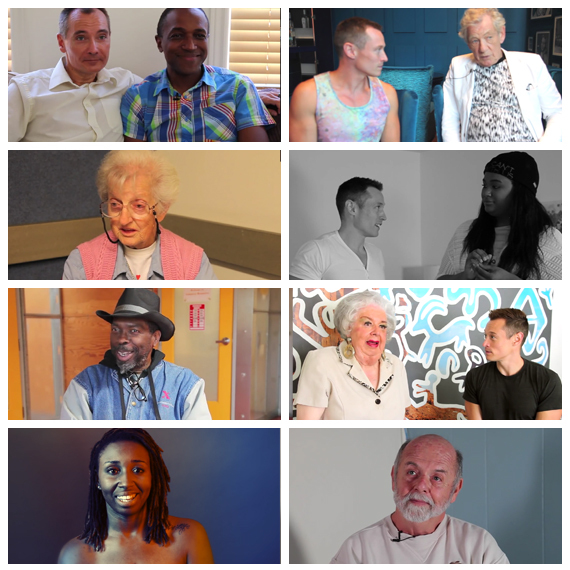 Last week, I posted a viral rant demanding respect for older gay men. With 5 million views and counting, it definitely struck a chord.

While celebrating the elders in our community -- and the sacrifices that they've made -- is something all of us can stand by, some of the responses have been negative. And personal. Case in point, this post by David Michael Conner.

As someone who has created more than 800 videos over the last 8 years, folks like Conner have noted that my content has included a number of young, white, shirtless gay men. This, they claim, undercuts my anti-ageism message with blatant hypocrisy.

But what critics fail to mention is that my videos have also included, in the last year alone, 88 people who aren't young, cis, white gay men.

In fact, I just finished interviewing an 83 year old drag queen. I filmed LGBT seniors sharing their best advice and chatted with Sir Ian about his experience and advocacy. I posted a video about racism on Grindr and several videos featuring transgender individuals -- including one yesterday! I shared the story of a father who rode 545 miles in memory of his gay son who died of AIDS. When I launched my newest DirtyFit underwear collection, we showcased non-traditional underwear models. And just a few months back, I launched a scholarship program for LGBT YouTubers from underrepresented communities called Rising Rainbows, providing funding and publicity. The first YouTuber that I collaborated with is JD, a queer Native American who is blind due to albinism.

But you probably didn't know about any of that. And that's exactly my point.

The real issue here isn't my alleged hypocrisy or ageism. It's that the videos gay men most often share, discuss and click on aren't the ones with important messages or diverse representation. Instead, it's the videos with the shirtless, young, muscled white guys that people like Conner have pointed out.

Conner mentions the Kardashians in his post. There's a reason why the media covers the Kardashians. It's because the Kardashians get viewers, and -- at the end of the day -- I'm also a business person and creating video content is my job. I'm supported by the ad revenue that my videos generate, and I need to strike a balance. The reality is, my videos with shirtless, young gay guys get a disproportionate amount of views because that's what our community consumes most.

In the spirit of open and productive dialogue, I'd love to hear suggestions for getting more attention on the more important videos that don't get their fair-share of attention. I'd love to hear your ideas for including more representation and people of all backgrounds.

I'm not perfect and there's always room to do better. I'll continue to challenge myself to be more inclusive and I welcome the conversation. But let's not miss the real story here.