I grew up on military bases. Which means, for the most part, I was surrounded by diversity, and can clearly remember being one of the only Caucasian girls in my classes in school and on our street growing up. During those years, my parents talked to me about racial tension and told me about this group called the KKK, which I ignorantly thought to be obsolete.

And then, in 1989, our family moved to North Louisiana. On the first day, we drove into town towards our new house, stopped at a red light, and in front of the town bank on the corner, terrifying white-cloaked creatures held up signs and screamed obscenities at our windows.

The KKK was real.

Flash forward almost 20 years later, and I have given birth to two boys. Two white boys, automatically born into privilege. I've thought a lot about this over the years, mainly because I rally for women to vote when an election rolls around because this is something I don't take for granted. My great-grandmother couldn't vote, but lived to see her daughter vote. I'm not passing on the opportunity earned by others who didn't live to vote themselves. Our boys will never have to utter words such as those that I just wrote, or that there was ever a time when they would've been without these birthrights.

So, I have open conversations with our boys. About how they have opportunities not always afforded to others and they should never take that for granted, nor should they stop fighting for others to have equal rights.

And then, over the course of the last few years, something happened. Both boys were diagnosed with autism. Which, at face value, seems like there would be no way in hell I could tie the subject of autism to race, but bear with me, as it proves to be valuable towards the end.

Our oldest has High-Functioning Autism. This means, basically, that he is whip-smart, and sees things in black and white, right and wrong, and that's just the way it is, period. Our youngest has Asperger's, and if you tell him that the sky is blue, he will tell you that he only sees white clouds. Neither of them view the world as we do, and this includes their views on people.

Last year, I took our youngest to a checkup at the neurologist. He refused to wear normal clothes and wore a superhero costume to the doctor's office. The office was abnormally crowded, with at least 50 patients waiting in the reception area, as it is for several physicians. Basically, I was surrounded by a hodgepodge of people just waiting to pass their time through judgment.

He was up to his usual shenanigans, and since he has no concept of an inside voice, when he talked, it was more of a bellow, which got us lots of stares. And then the nightmare started.
He started yelling about race.

Him: Mom, I have this friend at school and her skin is brown.

(He goes to a racially diverse public school, so I was surprised that he singled her out. And that he decided that this was the time to discuss it.)

Me: Shhhhhh!!!! (Feeling the burning eyes of judgment upon me)

Me: SHHHHHH!!! I understand, but let's talk about that later.

I want to crawl into a corner and die as it has gotten very quiet and everyone is now staring.

Him: But, Mom, she keeps telling me she is black, but she's not. SHE'S BROWN.

He continues: And she keeps telling me I'm white, but I'M PEACH.

The judgment turned to laughter, and then he started to sing a song about pink eye, so he moved on, but I started thinking about teaching children about race and talking about it at an early age.

I had always thought that I would have conversations about race through teaching moments, such as this mortifying moment I have just relayed to all of you.

But, I was wrong. Just like teaching our children proactively about right and wrong, sex education, responsible alcohol consumption and everything else, we must teach them about privilege and race proactively.

Around the same time as this exchange occurred, we took our oldest to Washington, D.C. While my husband was in meetings all day, I dragged our son to every monument and statue in town, gleefully discussing history with him.

On one of these days, we were able to secure a private tour of the Capitol. While standing in the rotunda, we had a long conversation about the Carrara Italian marble Portrait Monument carved by Adelaide Johnson of Elizabeth Cady Stanton, Susan B. Anthony, and Lucretia Mott. This monument is sculpted out of an eight ton slab, with three heads, each depicting these trailblazers, with one rough piece of stone waiting to be carved until the first female President of the United States is elected.

Innocently, he inquired why had there never been a female president?

Next, I took him to my favorite museum, the Holocaust Museum. Since this museum has a timed entry, we ate hot dogs from a vendor on the corner, giving me the opportunity to teach him about bystander behavior and how while he will grow up with the privilege of his birth, he will also carry the burden of watching out for others and being an ally for others who are still fighting for their rights.

We walked through this museum, and like me, he was somberly haunted by the souls living within those walls.

When we left, I caught him looking at this sculpture in from of the building. I gave him a moment, since I could tell he was deep in thought. 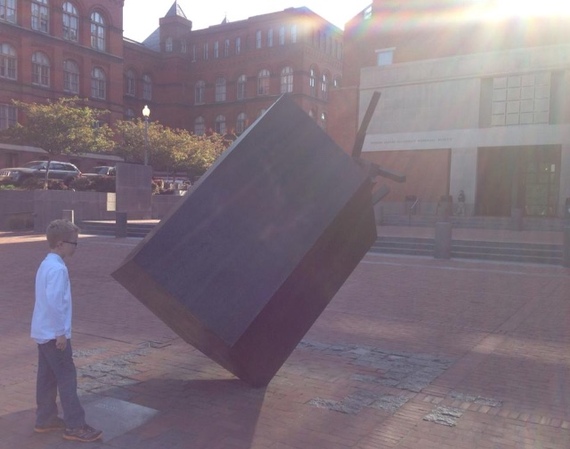 When I asked him if he had any questions, he said, "I don't really understand why this happened. We are all equal."

So, in light of all of the horrific occurrences happening right now because of a few hateful individuals, I implore you tonight to take the opportunity to talk to your kids about race. Talk to them before someone else does.

Start the conversation with this hashtag: #letstalkaboutrace

More:
Parentsrace relationsParenting
Newsletter Sign Up
Raise the kind of person you'd like to know
Subscribe to our parenting newsletter.
Successfully Subscribed!
Realness delivered to your inbox