Welcome to the debut of HuffPost's new "Let's Talk" feature. Look forward to reading some of the most thoughtful and provocative conversations between fascinating people on the web. 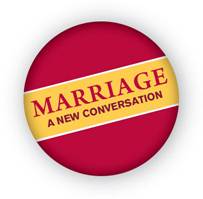 In this chat: Gay activist, author and Brookings scholar Jonathan Rauch discusses gay marriage with David Blankenhorn, head of the Institute for American Values. Blankenhorn recently became the subject of controversy amongst conservatives for coming out in favor of gay marriage.

Jonathan: OK, David. So you changed your mind on gay marriage. Now what? Until last June you and I had a cobra-mongoose relationship on gay marriage. I will always admire you for having the honesty and courage to look around, see that opposing gay marriage was doing nothing to strengthen American families, and changing course. In fact, I admire you so much that I joined the board of your think tank.

Unfortunately, honesty and courage, plus $2.25, will get you a ride on the subway. Family-values conservatives are furious with you because you're no longer on their side. Gay-rights supporters are suspicious of you because until, like, yesterday you were on the other side. Remember Gary Cooper in High Noon? Feel like that at all?

David: Well, it's true that I've managed to infuriate many good, important people on both sides of this issue. So our organization is indeed facing a High Noon moment, especially in the area of donor support. (Welcome to the board, Jonathan!)

But this is America, so let's look on the bright side. We live in a huge, over-the-top, deeply interesting, and rapidly changing country. My belief -- to be more accurate, my hope -- is that in this broad land, there is a new pro-equality, pro-family coalition waiting to be born. One that takes marriage seriously as a foundation of our civil society. One in which liberals support marriage even when the word "gay" is not in front of it. One in which social conservatives are pro-family enough to break bread with gays who are pro-family. And one in which gays fighting for access to marriage also want to leave the institution better off than they found it. A coalition, in short, that might, if successful, put an end forever to the conflict betweeen gay rights and family values.

And please don't tell me this is wishful thinking. So much of it, I learned from you.

Jonathan: Actually, I think it's time to let you in on a secret. You may think I joined your board to help you. Actually you are a pawn in my grand plan.

I've been publicly involved in gay rights issues for more than 22 years and advocating gay marriage for, wow, 17. All of that effort has been pointed in the direction of integration: erasing the invidious distinctions between straight and gay America. It wasn't just the culture warriors on the right who thought there was an unbridgeable gulf; so did the gay left, which saw homosexuality as intrinsincally radical, definitionally oppressed, etc.

Integration is a three-stage rocket. The first stage was the gay rights agenda: legal protections like antidiscrimination laws. The second stage was the gay responsibility agenda: military service, mentoring and parenthood and --especially -- marriage. The third stage? Remove the word "gay" from in front of the rights and the responsibilities. Just substitute "American." Sure, gays will still be gay and we'll still be different. But everyone is different, and we won't be more different.

The conflict is over. Integration is here. The trick is getting folks on both sides to see that. You, my friend, are the messenger.

Of course, sometimes messengers get shot.

David: OK, I'm a pawn in your game. But now think of it this way. In my scheme and dream, you and other gay Americans have some pretty heavy lifting to do. It's not exactly like you're expected to rescue the institution of marriage from all the abuse it has taken from heterosexuals in recent decades -- but it's somewhere in that neighborhood! You are definitely supposed to help things get better. You are definitely (unlike plenty of heterosexuals) supposed to do your best to be good stewards of the institution. And I'm talking here the old-school virtues: faithfulness, monogamy, no children outside of marriage, to have and to hold until death do you part. Otherwise, why do any of us, gay or straight, need the thing in the first place?

Moreover, if all else fails -- if our organization tanks, and the nation's leading marriage indicators continue to go south, despite the pro-equality upgrade -- I may decide to blame you and yours for letting my organization and our country down in its time of need. You might consider that unfair, and it might be unfair, but I bet it would work.

Does it still feel like I'm only a pawn in your game? Or that I'm the only messenger here who might get shot?

Jonathan: What do you mean, "if all else fails" you straights will blame us gays for the downfall of marriage? When did you stop?

My very first article on gay marriage (1996, read it here) admonished gays that we should treat marriage not just as right but as a responsibility: as something we take seriously and strive to do right by. A source of joy for me over the past few years is seeing that gays are stepping up. Sure, we'll have our own Bill Clintons and Britney Spearses, but as I watch gay couples form and defend their families and kids, I'm now confident that we're part of the solution.

But I've always said we gays can't rescue marriage. You straights broke it, you'll (mostly) have to fix it. What makes you think straights will do anything about that?

David: I have hope, but I'm not at all sure that we straights will do anything about it. The last time I felt truly encouraged about the marriage trend overall was in the mid- and late 1990s, when unwed child bearing was leveling off; divorce was declining; reported martial happiness was up; teen pregnancy was plummeting; the proportion of African-American children living with two married parents was modestly rising; and more and more scholars and opinion leaders were embracing the ideas that children need fathers and that marriage matters. But around 2000, most of the demographic trends that appeared to be getting better, suddenly stopped getting better; most of the marriage and family indicators started going south again. And as you well know, about this same time, or at least not long after, what had been a fairly broad public discussion of marriage in America became an all-consuming debate on gay marriage.

Cut to 2013. While marriage equality is winning victories and gaining converts (like me), marriage overall in the United States is fracturing along class lines. Among the 30 percent or so of upscale Americans with four-year college degrees, marriage trends are looking pretty good! (If this group were the entire nation, I'd be as encouraged as I was in the late 1990s.) But among the 60 percent or so of Americans who have high school degrees but not four-year college degrees -- the nation's broad lower middle class and working class -- marriage is disappearing, right before our eyes. More and more unwed child bearing, one-parent homes, serial love relationships, chaotic home lives for children, frustrated hopes, bruised lives -- the whole sad shebang. And very few people in high places seem to give a damn about it, or even to have noticed. (You are an exception.)

Jonathan: Yes, class bifurcation is the marriage problem of our time. Family instability among the less-educated and rising inequality are two sides of the same coin, each perniciously feeding the other. Yes, it's tough to do anything about. But yes, I have hope, because we've arrived at a moment when, as a society, we can finally take off the culture-war blinders and see the real problem, which is the sine qua non for doing anything about it.

I've never seen an opening like this. That's why I'm hopeful. That's why I want your think tank to survive the efforts by culture-war conservatives to defund it. (Everyone: go here to learn more, and please consider adding your support.) That's why I'm on your board. Lots of folks will continue the old conversation, but we can start the new one.

David Blankenhorn and Jonathan Rauch are signatories to "A Call for a New Conversation on Marriage." You are invited to read the call and become a signatory today.

Author, 'Denial: My 25 Years Without a Soul'