President Obama came out with a plan yesterday to address the auto sector's woes. He asked Wagoner to step down and called for a fresh approach to helping the industry. Among other items, he called for an immediate program to get inefficient cars off the road and incent Americans to buy efficient cars. He said,

...several members of Congress have proposed an even more ambitious incentive program to increase car sales while modernizing our auto fleet. Such fleet modernization programs, which provide a generous credit to consumers who turn in old, less fuel efficient cars and purchase cleaner cars have been successful in boosting auto sales in a number of European countries. I want to work with Congress to identify parts of the Recovery Act that could be trimmed to fund such a program, and make it retroactive starting today. 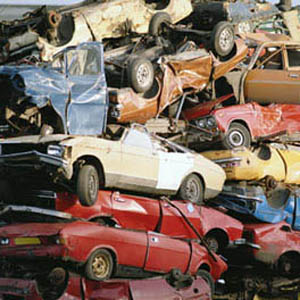 The good news is that there are strong bills in S. 247 and HR 520 that are just the kind of program the president is calling for. These bills are sponsored by Feinstein, Schumer, Collins, Israel, Inslee and others and help drive cars sales while at the same time changing out the fleet for a more efficient one that reduces our dependence on oil.

These bills have bi-partisan support. Here are statements from Dianne Feinstein and Susan Collins:

The bill, said Sen. Dianne Feinstein, D-Calif., "would be an important part of helping getting America's struggling automobile industry back on its feet, and help consumers who are concerned about covering the cost of buying a more fuel-efficient vehicle."

Unfortunately, there is also another bill, HR1550, which does not result in more efficient cars on the road. HR 1550 also violates the WTO agreement and is thus illegal.

As the Administration and Congress puts into effect the president's command, we should make sure to put in place a program that can both boost jobs and get this country off of oil.