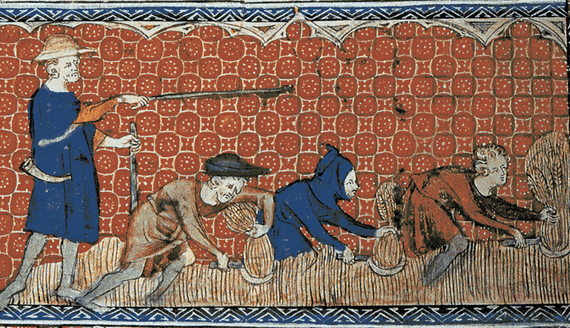 Slaves of the Internet, arise! You have nothing to lose but your chains... Nope, you don't even have those...

In the Middle Ages, it was the common practice that serfs worked the land of their lords for no wages. What they got instead was the right to live in their miserable hovels, which also belonged to the Lord of the Manor. That was the trade-off. Free labor for free housing. No one got paid for gleaning the fields or harvesting the crops. That was how the system worked.

There were no serf's unions in the 15th Century. The idea that the "workers" might actually be entitled to anything was, in a word, ridiculous. Unthinkable.

In Medieval Europe, wealth was measured in land. If you owned land, you were on the top of the economic pile. If you didn't own land, you were, well, a serf, which is what 99% of the population was. Serfs. When William the Conquerer conquered England in 1066, he became one of the world's wealthiest men -- valued at some $180 billion in today's money. That was because he suddenly owned a LOT of land.

Land ownership was important because that was where the food came from. And everyone had to eat. Pretty much all the jobs were agricultural.

Today, pretty much all the jobs are related not to the land, but to the web. To cyberspace. That's where most of our transactions take place -- where we buy things, where we sell things, where we grow things.

But who owns cyberspace?

Well, like in the Middle Ages, a tiny handful of nobles -- nobles like Mark Zuckerberg or Jeff Bezos or Sergey Brin. The lords of the Internet. Pretty much everything we do takes place on their real estate. On their land.

And how did they get it? Well, a lot like Williams the Conquerer, they just sort of took it.

But now, we all work for them.

Let's take Facebook -- valued at $200 billion or so -- pretty close to William the Conquerer's ownership of England.

What is Facebook actually made of? What is the product?

Well, it's all the stuff that we put into it. The content. Our contributions. No one gets paid to contribute to Facebook. We all do it for free.

You know. Us. The serfs of cyberspace.

Every day, we all toil away, creating content for absolutely no pay. Just for the right to live on Lord Zuckerberg's cyber domain. It's our rent. We daily contribute our IP to Lord Zuckerberg. But it's not just for him. We also daily work for Lord Twitter and Lord Instagram and Lord TripAdvisor... the list could go on and on.

Now, Lord Zuckerberg is worth an estimated $33 billion.

Yes, thanks to us all working our asses off over here at the cyber plantation for no pay at all.

When we look back at the Middle Ages from our 21st Century hindsight we can see that, if you want to talk about Income Inequality, that was the place to go. We are astonished that 99% of the population of Europe toiled away for no pay, as more or less the property of the very few.

Today, we are outraged.

But, we are also no better.

Because we are also toiling away for no pay for the benefit of the very few.

The real estate may have changed. The basic economic model has not.

In the early 20th Century, factory workers in England and the United States began to get the idea that they had some power -- some leverage over the owners. It was a novel idea. They realized that without their work, the factories or the coal mines would come to a grinding halt. So they unionized.

Without our daily contributions to Twitter or Facebook, those institutions would also come to a grinding halt.

We are the workers.

Could we unionize also?

Without our free labor, they are nothing.

But if we unionized, what we we demand?

Well, we might demand better pay, but since we don't get paid, that might not be very practical. Still, the vast wealth of people like Zuckerberg is built almost entire from our sweat and labor. Is there something else we might demand.

I think we might demand that a certain percentage of the vast wealth that we collectively have created for the Lords of the Internet (and it is VAST), might instead be put to the general welfare of the commons -- toward the common good -- that is, us. A BIG percentage. It is our work, after all.

That a certain percentage of the pornographic wealth that we are collectively creating should instead of being absconded as personal gain, should be spent on things like schools or hospitals or public parks or public works -- things we can all -- all of us who MAKE the content -- share in.

This does not strike me as unreasonable -- well, unconventional perhaps.

But then I suppose if you had suggested unionizing the serfs of 15th Century England and that the collective product of their work should be spent on their common good and benefit -- well, they would have thought that you were out of your mind. Clearly, all the value that the peasant class created belonged to the King and the Lords.

We have moved on a great deal since then.