A Canadian dog rescuer did not hold back in an email sent to a lawyer for the city of Montreal regarding its recent pit bull ban.

On Wednesday, a judge ordered a suspension of the measure, which would have banned pit bull adoptions — effectively sentencing the numerous pit bulls in city shelters to death. The court also placed strict regulations on people who already own the dogs.

One issue the judge had was the provision’s vague wording about what dogs even qualified as “pit bulls.” City lawyer Rene Cadieux responded, “If it looks like a duck, walks like a duck, quacks like a duck, it’s gotta be a duck.”

Troy Way, who does not live in Montreal himself, took that logic to task in a Friday email sent to Cadieux, as well as Montreal Mayor Denis Coderre and other city officials.

“I have attached a photo of some of my ducks,” Way wrote. “All but one are mixed breeds of different ages, sizes, shapes and colors, all very friendly, all living together in peace and harmony.”

Way implored Cadieux to let him know which of his pets would theoretically have to be killed if he lived in Montreal since the new provision limits the number dogs in a person’s home ― and dogs that could qualify as “pit bulls” would not be able to be adopted out to new homes under the ban.

Read the whole letter below:

At a hearing on Wednesday October 5th to determine whether Montreal’s controversial “pit bull” bylaw would be suspended or not, you stated in response to the difficulties in identifying a “pit bull” (pit bull is not actually a breed, its a descriptive term) something to the effect of “If it looks like a duck, walks like a duck and quacks like a duck, its got to be a duck”. I won’t even address the “pornography” comment.

I have attached a photo of some of my ducks. All but one are mixed breeds of different ages, sizes, shapes and colors, all very friendly, all living together in peace and harmony. They are also all spayed and neutered, vaccinated and microchipped and licenses as I am a responsible pet owner. Not one of them has ever been involved in an altercation with a human or another animal.

My question to you is this: Can you please identify for me which of my dogs is a “pit bull” or which dog/s would fall under the overly broad umbrella of being labelled a “pit bull” and forced to live under the restrictive conditions of Montreal’s new bylaw.

I understand that you are likely not qualified as an expert in breed identification, but then nor are the individuals who will be enforcing the bylaw in Montreal, so this should not be an issue.

As the bylaw also restricts the number of dogs a person can share their home with, perhaps you can point out the dogs you dislike the most to help with my decision of which ones I should have killed. Killed? Yes, because if they are identified as “pit bulls” I cannot adopt them out or take them to a shelter as the bylaw states no one can acquire a new “pit bull” and shelters must euthanize them.

I hope this puts in to perspective for you. I look forward to your response.

“I actually have 11 dogs,” Way told The Huffington Post in an email. “I’ve been involved in rescue most of my life and always have a house full of furry friends.”

Eight of the animals in the photo are his own pets, he said, though the dog labeled A — named Tessa — has been adopted since the photo was taken.

“I imagine for the average person it would present some challenges but for me its a part of my life and I’m pretty dedicated to them and to rescue,” Way said.

As for what kind of “ducks,” he really has, Way’s not even sure of that himself — and he says it doesn’t matter.

“I simply refer to them as a ‘Canadian mix’ and enjoy their companionship rather than worry about what breed of dog they might be,” he said. 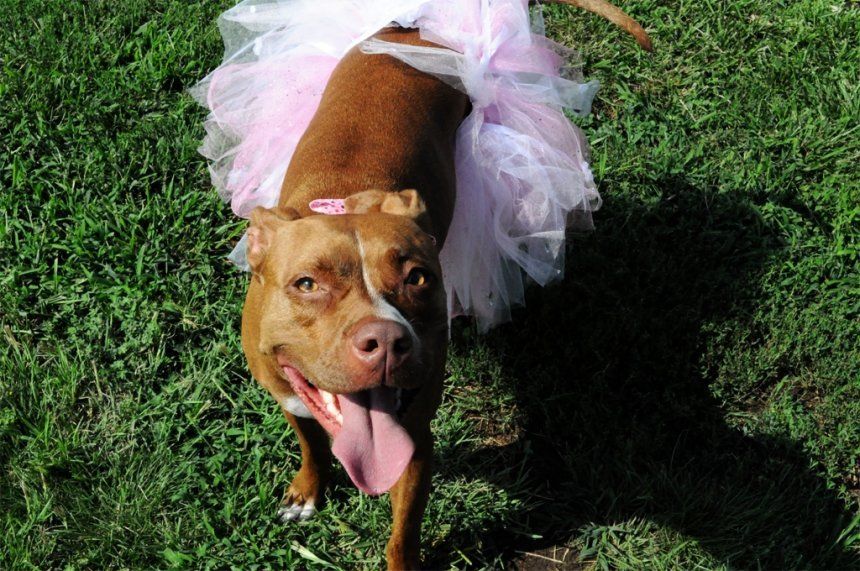