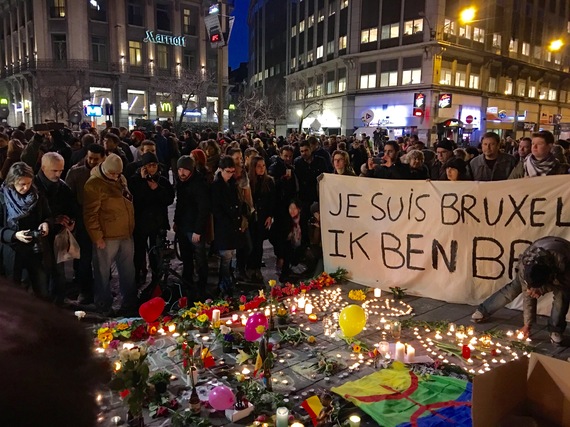 In his essay "The Idea of Europe", George Steiner, the pre-eminent writer and cultural philosopher, writes about how Europe is made up of coffeehouses, how cafés are its essential markers.

"In the Milan of Stendhal, in the Venice of Casanova, in the Paris of Baudelaire, the café housed what there was of political opposition, of clandestine liberalism... Danton and Robespierre meet one last time the Procope. When the lights go out in Europe, in August 1914, Juarés is assassinated in a café. So long as there are coffeehouses, the 'Idea of Europe' will have content."

When the news of the bombings here in Brussels first arrived, I instinctively reached for my bag to head to my most frequented café. It is there that I will answer all the messages I see piling up, from concerned loved ones in cities as far off as New Delhi and New York. I will tell them that I am alive, and so is Peter, my partner, that we are both "safe". I would only use those inverted commas in my head when considering that four-letter word, a word that means everything and nothing these days. And yes, of course we are staying indoors, don't worry, I will lie.

That is exactly what I do -- head to my café. Fifteen minutes in, the barista girl with the familiar face who draws flowers and hearts with milk foam on my cappuccino, tells each customer, in a tone that implies apology but betrays something else, that they are closing for the day. "A cause de l'attentat" -- due to the attacks," she says. I am horrified. More than I should be at this announcement of the café closing. It is as if she has just told us that this Idea of Europe, we're closing it now. It won't work today. Try coming back tomorrow to see if it's all still here.

I try hard not to think of George Steiner and his words.

Back home, I am on social media, as is everyone else I know. The memes appear a bit too quickly -- the Belgian flag overlay, Tintin in tears, fries arranged to show a defiant middle finger to the attackers. Even Manneken Pis, Brussels' little peeing boy mascot, shown peeing on a bomb to diffuse it. Were we that prepared for something like this to happen? Or is it just that some people are very quick with graphic design? I wonder because it just feels like it is happening more quickly than it should. We were doing this for Paris just four months ago.

Ah, social media! That great echo chamber where, in times like these, we tell people with beliefs exactly like those of ours how terrible it is that there are people who have other beliefs. Other beliefs that involve murdering people going to work in the metro or boarding a flight, people with everyday hopes and dreams. Yet how comforting it is to be on Facebook right now, as if we're all trying to say, "These attacks? No matter. Humanity survives. Here's proof. In words and images."

More concerned messages, calls. TV channels playing the stories in a loop and the count of the dead and injured inching up by the quarter hour. I can't reach Peter on the phone but we text -- thank heavens for these luxuries that technology affords us.

A friend from Amsterdam text to check in. He thinks this is bound to happen in Holland as well. His resignation makes me want to cry, given he is one of the more life-affirming and fearless people I know.

I try to ward off thoughts of the aftermath. The havoc this will play on our ideas of freedom and security, and why we can't have both, entirely. The voices that will appeal for a police state and for being wary of the Other, now much louder and falling on more vulnerable ears.

When Peter comes home at an unusually early hour, we decide to head out for a walk. A few hundred other people have had the same idea and are all gathering at the Bourse, the two-hundred year old building in the heart of Brussels, which is soon to be turned into a beer museum. There are candles, flowers, flags, TV cameras and enough defiance to offset any fear.

We don't usually hold hands on the street -- public displays of same-sex affection are less common here than in a place like New York City -- but today we break the unspoken rules. Two defiant homos on the main square, in a community mourning ritual to grieve for people we didn't know, but could have. Lives lost too soon, that shouldn't have.

As night falls, and there is the shadow of a light rain, people start to head home, and we do the same. On the unusually deserted street leading up to our building, a young man on a bike stops us. He fishes out two pieces of paper from his bag. We exchange puzzled looks with this stranger and then, looking at the paper, realize that we are looking at a poem he has written about what just happened. This evening, he is going to bike around town sharing this with anyone he can.

This stranger says something in French, which I don't entirely understand, partly because I am still staring at his poem and partly because this is all still a bit too surreal. Just before he pedals off, he gives me a look, a look held ever so slightly longer than normal, in these not normal times. A look that, to be understood, does not require that we speak the same language.

A look that reminds me, vaguely, of a Rumi quote. Something to do with wound and light.

"The wound is the place where the light enters you."

Looking at this stranger's poem, I decide I will head back to my café tomorrow morning.

It will have survived, and so will this Idea of Europe.