With the crises in the world over the last year or so--the attacks in Mumbai, the cyclone in Burma, protest in Tibet, and now the Iranian elections--information has been reported fast and furiously by everyone with a device to do so. Were the facts accurate? Yes/no/sometimes. At the very least, the points-of-view of the senders are transmitted to us.

No matter how or what, a picture of the disaster develops for the rest of us to experience in some immediate sense. We read the reports, look at the photos, and watch the videos. We draw our own conclusions about what the shocking calamity means to the society--the individuals--who are directly affected. And then there's the question of what these natural and man-made tragedies also mean to us.

What will we, with all our enormous resources, do--or not do? Who will let us in--or keep us out? How long can the various unfair and usually heartbreaking calamities maintain our Western attention?

Over this eventful year, I've been following a social network for international English students called englishbaby.com that has 1 million members all over the world. With many sources of information blocked in Iran, English, baby! is still publishing the voices of Iranian youth.

Jason Simms, a Portland, Oregon, freelance writer who creates lessons and helps out with marketing at English, baby! told me this: While Twitter and Facebook have been mentioned in the media for circumventing censorship, Iranians are turning to smaller networks as well, especially one where all the content is in English. Since YouTube has been banned and other major sites may be next, sites like English, baby! could become more and more important in the cyber conversation.

Understanding comes when people of different nations and cultures come together and talk.

Before there was Tehran, there was Tian'anmen. On our site, Iranian and Chinese students have discovered they share a strong bond.

People in both countries have to be careful about what opinions they make public. Because it's primary function is educational, the English, baby! users are having a relatively unfettered discussion about Iran.

What do the Chinese think of the crackdown on the demonstrations in Iran? A 28-year-old Chinese member with the handle sofree believes Iran only erupted because the election may have been rigged secretly: "My opinion is if one government want to rig, you should do it at the beginning, like ours. People will get used of it. Ask any 90' kids in China, I bet less than 1/20 know about the 1989 Tian'anmen protest."

Another Chinese member, 25-year-old Carole, has no qualms decrying the violence in Tehran. "No matter what happened," she says, "the policeman and soldiers have no excuse to kill the civilian!!" 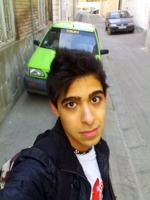 Tufan, a 24-year-old Iranian man, explains that there is no going back for Iran--if a new election were held today, many would vote differently. "Now even people who voted to Ahmadinejad are regret for their decision when they see how he treats to demonstrators," he says.

Despite the turmoil in his country, 25-year-old drmkazemkn is able to joke. "i tell Iranian not to worry about it," he says, "cause for the next election i am going to participate as a candidate so most people specially my English baby friend will vote to me so i will become president and solve all people problem."

If you're following the events in Iran on Twitter, your information either comes from the people you follow, or the #IranElection topic with about 50 tweets per minute, many of which are retweets or helpful info for people in Tehran. In some ways, it makes sense to look elsewhere if you're an outsider wanting to get a sense of the variety of feelings in Iran or how people around the world are interpreting the events there.

To join the discussion on Ebaby!, take a look at Tuesday's English lesson of the day about the protests in Iran, or this discussion thread, which was created by an Iranian member and is the longest on the topic on the site.

This forum thread begins with a list made by a 16-year-old of all the good qualities of Iran, which he hopes are not forgotten during this time.

Beth Arnold lives and writes in Paris. To see more of her work, including her new Obamarifix, go to www.betharnold.com.