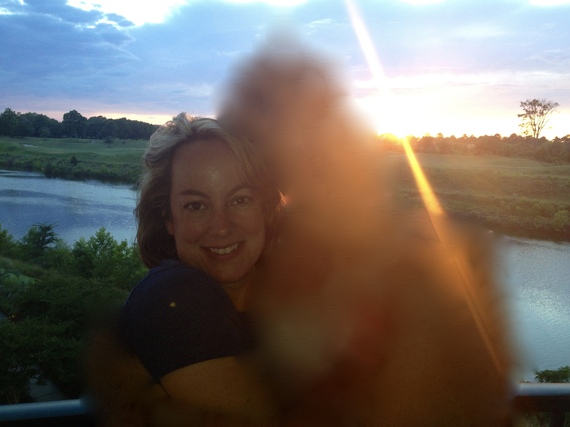 I know this happens. I just didn't think it would happen to us.

We went from talking every day to total silence. How did we let this happen?

I know, it's complicated. And yes, we both had a part in the friendship's demise. I don't claim to be a saint or innocent. But I'm thankful at least I can say I kept trying. For a while at least.

It sucks because our kids were also friends. And now, I don't think they can say that they are. They don't see each other. My kids ask me, "Why?" How can I explain when I don't even understand it?

What hurts the most is that we didn't fight enough to keep the friendship going. You were struggling with your demons and frustrations and didn't see me as someone to confide in about that. Once the one constant we shared was gone, it proved that it was the glue that held our friendship together. So when you left the constant, you also left me.

I tried. I thought we were headed back in the right direction. And then silence. You didn't reciprocate, and eventually I gave up.

I miss you, friend. But I still wonder, why did you give up on US?

I think I can forgive. Then I can't.

I wish we could go back to the way we were.

What do you do when someone you thought was a forever friend isn't even a friend anymore?
I keep asking myself: "How did I get that one so wrong?" and "How did this happen?"

I miss my friend. At the same time, I'm mad at her for not being true blue. I want to hug her, laugh like we used to, and put all this crap behind us. I also want to put a Rocky Balboa hurting on a punching bag to take out all my anger and frustration. It's really complicated.

What would I do if she reached out to me after all this time? Hopefully I would be kind and gracious. Certainly, a small part of me would think I was being a wuss in doing that. I'm afraid the die has been cast.

I wrote this cryptic post a few months ago because I needed to wrap my brain around why my friendship with my bestie fell apart. Once our common ground disappeared, radio silence followed.

I've had time to think about it more objectively. Take away the sadness and sense of loss and instead put some sort of meaning behind it. See my mistakes and flaws in how I acted and be better next time. And move onward and upward.

1. Some friends ARE friends for a season.

I DIDN'T want to hear the whole "friend for a season" comment in the middle of my pity party. But think about how many friends you've had through your life. Sure, there are some constants, but why do we import more significance to losing an adult friend than losing touch with say a middle school friend who moves away? Both were in your life at a particular window of time and for a reason. Seasons change; so do we. And sadly, so do our friends.

2. Leave the door open for reconciliation.

I like the word reconciliation here because it means "returning to faith or harmony after a conflict." I could have said, "Kiss and make up." Either way, this comes with an asterisk. I will only leave the door open for reconciliation so long as the friend didn't do something deplorable or harmful to me or my family. Then there should always be the possibility that we might become friends again. Unrealistic? Sure. OK, so the friendship certainly won't be the way it was before. At least not overnight. But a friend deserves a second chance.

3. Friendship takes effort. Be willing to do the "work."

Ralph Waldo Emerson wrote, "The only way to have a friend is to be one." Meet in the middle. It takes effort on both sides. In some friendships, it hardly seems like work because both give so freely and naturally. But when you boil it down, both have to have skin in the game. Friendship is a two way street, not a one way road. Yes, there needs to be a give and take, but now, my focus is on what I GIVE.

4. Don't let time become the enemy in my friendships.

It's been a year now since I saw her in person and we talked. So picking up the phone or texting her now would be so random, so awkward. Time is now the extra roadblock. If you are estranged from a friend, do something about it today before time becomes a barrier you feel you can't overcome. I won't make this mistake again.

5. Be a better friend to those friends that are standing by my side. And quit looking in the damn rear view mirror.

I'm a Pisces, so my sensitive, overthinking soul doesn't handle this part well. This particular friend is in my past. She is not in my present. So I should stop looking in the rear view mirror and rehashing what happened and overlook those wonderful friends who have remained steadfast, loyal listeners. Quit romanticizing the friendship and yearning for something that didn't last.

My NOW friends get me and have my back. So I'm going to be even more appreciative and thankful for those friendships and not dwell on what has been lost.

Will there be a postscript to this story? Who knows? But for now, I'm good. Better, in fact. I've learned that it's good to have friends in ALL forms: "for a reason, a season, or a lifetime."