"Let us all hope that the dark clouds of racial prejudice will soon pass away and the deep fog of misunderstanding will be lifted from our fear drenched communities, and in some not too distant tomorrow the radiant stars of love and brotherhood will shine over our great nation with all their scintillating beauty."--Dr. Martin Luther King, Jr., Letter from Birmingham Jail 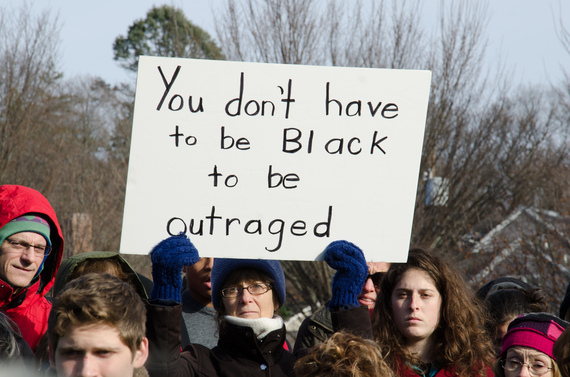 Like most Americans, I watched the horrific tragedies of last week unfold with tear-filled eyes and a broken heart. Together, we witnessed seven more examples of the explosive consequences from a toxic cocktail of hate, ignorance, injustice, and fear.

Unlike many of the pundits, though, my biggest fear isn't that the summer will devolve into an unending cascade of demonstrations and prayer vigils, bringing continuous attention to the open and festering wound of race and injustice in America. My biggest fear is that it won't -- that collectives of mostly Black activists will continue the important work of calling attention to the need for dramatic reforms in our American criminal justice system, while everybody else, especially White Americans with the luxury of distraction, goes back to thinking about everything but justice reform.

Because if I have learned anything from my decades of work on racial justice, equity, and opportunity in the education system, it is this: (1) that relentless pressure from the outside is essential to driving change within big systems, and (2) that concerns expressed solely by the sufferers of injustice -- as powerful as their numbers, voices, and resolve are -- are less likely to spur fast action than when they are carried on the collective shoulders of a broad and diverse coalition. And while Black leaders and other leaders of color have long stood strong at the helm of this movement and know best what changes need to occur, we White folks have a role to play too in calling out racial injustice. And we must feel the urgency of the moment as deeply in our chests.

That deep urgency has always fueled our work at Ed Trust. Over the years, that work has sometimes felt lonely. We're the ones in the room who always say, "Yes, congratulations, your graduation rate (or your test scores or your AP participation) is going up, but what about the Black students (or the English learners or the low-income students) who are underrepresented in those achievements? What are you doing to accelerate these students?" Those words are not so far removed from, "Yes, congratulations on your lower arrest rates or lower instances of fatalities in police-citizen encounters. But what about the disproportionate rates of Black Americans pulled over and arrested -- or worse -- for unsubstantiated crimes?" Neither our education system nor our criminal justice system is immune to the inheritance of racial bias and injustice.

But the times of real progress have always come as a result of pressure from what we have come to think of as strange-bedfellows coalitions -- for example, in our field of education, when a host of civil rights and social justice organizations stood side-by-side earlier this year with the nation's major business organizations to demand equity-focused improvements in a proposed education law. Or, more than a decade ago, when a Republican president stood side-by-side with liberal lions Ted Kennedy and George Miller to force the education system to confront long-standing inequities in opportunity and achievement.

In our burning impatience at the slow pace of change, though, those of us pressing from outside of big systems must be careful never to demonize those who work within. Just as the high aspirations that newly-minted educators have for even the poorest children can give way to low expectations in substandard schools that provide little support and training, the service part of "protect and serve" can get lost among police officers who entered the profession absolutely determined to be problem-solvers in our most troubled communities but end up under-supported and socially isolated. I watched the process in both professions, having spent several years on police selection panels and many more as the wife of an officer. Our job as advocates is not to humiliate them, but to engage them in solving problems that, quite frankly, we will never solve without their insights and participation.

Fighting for racial and economic educational justice is why people come to work at The Education Trust, whether they be Black, Brown, or White. What each of us knows is that this work of making the country live up to its promise is a job for all Americans, not just those for whom those promises have largely been broken.

Indeed, Desmond Tutu may have said it best:

"If you are neutral in situations of injustice, you have chosen the side of the oppressor. If an elephant has its foot on the tail of a mouse and you say that you are neutral, the mouse will not appreciate your neutrality."

The work of achieving the America we dream of should not be the work of one group or another but all of us who call this country home. And we the people -- Black, Brown, White -- must not rest until all can claim that dream. And bring it to powerful, just fruition.