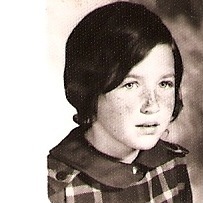 Me, the year my father was killed.

I am a 51-year-old woman now; my father has not been with me for most of my life, and yet I still feel his presence; I still miss him. When I was 10, and he was killed, I hated you. In fact, I hated you for many, many years. Somehow I got it in my head that you were a drunk driver and killed him while driving drunk. Perhaps someone told me that, or maybe it's just what a child creates to make sense of a senseless world. Admittedly, that story helped me for a while. It gave me a place to focus my pain, anger, and loss. If I hated you, for taking my dad away, I didn't have to look at so many other pieces. We all need something to hold onto, when we're drowning.

However, many years later my aunt, dad's sister, told me that you were in fact a good man -- young like my father, and that you felt terrible about your part in his death. She told me that she thought you had even come to my father's memorial service. It was news that challenged me on so many levels; it's information I've chewed on for several years since. I remember the day my father was buried, so well. I remember the funeral home -- filled with people, suffocatingly hot in the Stockton heat. I remember that our family sat separately, in an area apart from the other mourners. I was restless, listening to people get up to speak, listening to prayers -- to a God I hated. I remember my father, in the casket... It was one of the worst days of my life. If you were sitting there too, I can't help but wonder what that day felt like for you. 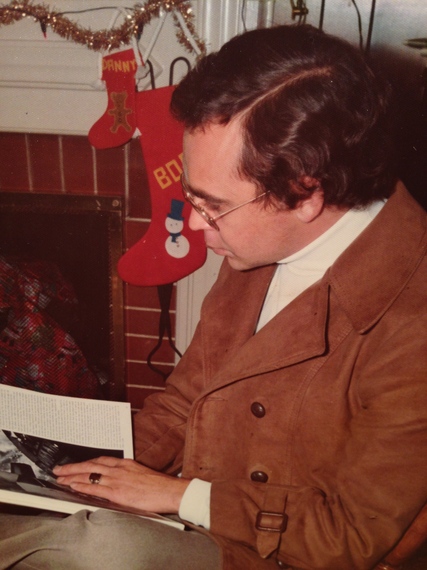 My dad, six months before he died.

My father was a very young man when he died. He was the father of three children; I am the oldest. My brother was eight, and my little sister was almost five. We have all grown up without our father, and that hole has impacted each of us very differently -- but make no mistake, we each have a hole. For so long I wanted to fill mine with what ifs, and anger for you. You, you, you -- a mysterious face in the crowd, who changed my entire life! If only you knew how many times I've imagined your face, and wondered where you were and what you are doing. Have our paths crossed, in all of these years? Could we have met, and not known who the other was? If I met you now, what would I do, what would I say to you?

I would say this: I'm so sorry for your loss. I know that you were just driving that day; you had no idea that your car and my father's motorcycle would collide. I can only imagine the pain you've felt over the years, having experienced such a trauma. I would tell you that I grew up to be a successful and happy woman. I have three beautiful children and I've been married for 28 years, to a very good man. My oldest son looks like my father sometimes -- there's something in his hairline, and the shape of his face. It catches me off guard when I see it, like my father has whispered in my ear: I'm still here with you. I want you to know that I'm alright. I have never stopped missing my dad; I'd give anything to change that day and bring him back. But, I imagine you would too.

A couple of years ago, I heard an amazing story on NPR about people who had accidentally killed someone, and how that impacted their lives. I was deeply touched by the stories -- the depths of the storytellers' remorse and pain. It sounded so much like my own, that I suddenly realized I'd been carrying both your pain and my own... all these years. You have been as much a ghost to me, as my father has -- both of you haunting me. I have imagined that day -- that intersection, the crash -- countless times. I've relived seeing my father, lifeless in a casket, for years. And I've imagined what you must feel. Hearing that story on NPR was so hard to listen to; I cried and cried -- deep, convulsing sobs, as I let go of the last of my anger, as well as yours.

I've fantasized about finding you. I think about what I would say, and how we would both finally put our burdens down together. I would hug you, and say I'm sorry you've suffered. Perhaps you put this behind you a long time ago. God knows it's been a long time -- but pain doesn't always have an expiration date. Given the years, you may not even be alive now. Because his sisters, my aunts, are so youthful and such an important part of my life, I imagine my father would be alive now, too, if your lives had not collided on that day in 1973. However, the reality is he might not have lived to see his 74th birthday, this week. Perhaps we wouldn't be close, and I'd be worrying about whether it would be awkward to have him here for Thanksgiving dinner -- lots of families struggle with conflict. Or, maybe we'd be the happy family I've dreamed of -- he'd be excited to see his grandchildren; I'd be happy to have my dad here for the holidays, getting together like so many other families. I'd have a birthday present tucked away, for after dinner, and a birthday cake beside the pumpkin pie.

These are questions I'll never answer; there are so many things I'll never know. But I do know this: if you are still out there, if you still think about my father: Robert Quyle, and the day your lives intersected, June 9, 1973. Put that burden down. He's gone; nothing can change that. We both need to move on, and live our lives fully and gratefully. To the man who killed my father, I forgive you.