I'm a huge fan of David Letterman's and think he's the best of the current breed of talk show hosts, even though his monologues often hit and miss. Indeed I sometimes wonder if Dave realizes he's not doing a nightclub act in front of a different audience (nationwide that is) when he often repeats a joke almost word for word three or four days in a row. 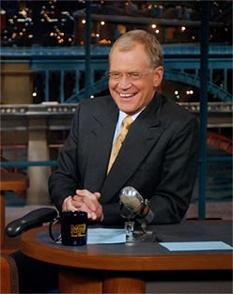 But his panel patter -- mostly extemporaneous -- is unmatched by his Late Night Show peers such as The Tonight Show's Conan O'Brien, ABC's Jimmy Kimmel, CBS' Craig Ferguson and NBC's Jimmy Fallon. His sharp wit and well-informed grilling of his guests show that he is well read, very much in the know and incredibly up on current events.

So, how is it that, after having started a humorous rant early in the week relating to his comic obsession with Oprah Winfrey and her industry power, and wondering aloud why he wasn't invited to dinner with the president this coming weekend as she was -- since he was going to be on Martha's Vineyard at the same time -- Letterman continued the joke nightly -- as is his habit -- even after he must have known Teddy Kennedy had died on Cape Cod.

Obviously he hadn't on Tuesday, as his show is taped in the afternoon, but by Wednesday and Thursday he was surely aware. Yet, it seems that he and the other Late Show writers were determined to hang onto what they deemed to be a very amusing running gag, even though it was clear Obama was going to be delivering a eulogy at Kennedy's funeral on Saturday.

Even if Obama was going to keep his date with Oprah while preparing his remarks for the sad occasion, it seemed unseemly and inappropriate for Letterman to keep harping on this presumed "slight" by the president, as if Obama had nothing else on his mind.

Apart from the fact that I'm one of the many millions around the world who mourn Kennedy's death and am confident that Letterman, knowing his politics veer left, probably shares my profound feelings, this not-so-funny running bit seemed tasteless and particularly out of touch.

But his monologues included material that was very up-to-date, including John McCain's ejection of a woman from his town hall, which just happened Wednesday, not to mention Dave's reference to the nomination of Ben Bernanke for a second term as Chairman of the Federal Reserve Bank.

So, it's clear this continuing "comic" faux pas about the Obama/Oprah dinner was done with knowledge of Senator Kennedy's loss. To that, I can only suggest Dave Letterman and his writing staff might show a little more consideration and sensitivity rather than being so in love with their material that they won't chuck it no matter how indifferent and oblivious to national and world events it makes them appear.