There's something special about finding, nestled among bills and glossy catalogs, a personal letter in the mail. The envelope may be wrinkled, smudged. It may have some heft to it. Now imagine if the letter was from one of your favorite authors. And there's a return address if you want to write back.

The literary website The Rumpus is hoping to capture that sense of excitement with their new print subscription, Letters In The Mail.

The concept is simple: Each week (or so) an author writes a letter, which is then photocopied and mailed to subscribers. A subscription costs $5 a month. Each letter is written by someone different and won't appear online, creating a self-selected group of readers across the country who are privy to literary correspondence that feels, well, intimate.

After launching in January, the community of subscribers has already reached over 2,100.

Stephen Elliott, the prolific author and brainchild behind The Rumpus, came up with the idea. It's a natural progression of his popular email list, The Daily Rumpus, where he sends long, deeply personal emails to whoever signs up.

Elliott penned the first letter, detailing his experience with letter-writing, and received over 50 replies in the mail. Since then, subscribers have received a graphic novel letter and a poem, among others. Letters from Dave Eggers, Amy Bender, Tao Lin and Jonathan Ames are in the works. 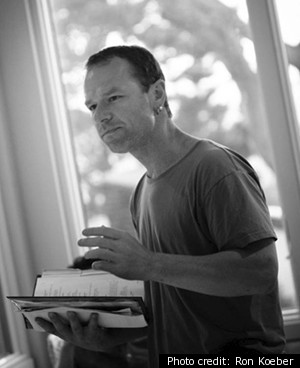 HuffPost's Melissa Jeltsen sat with Elliott and interviewed him about why letters are a powerful medium for writers. (Full disclosure: Jeltsen subscribed to Letters In The Mail the day it started and eagerly anticipates the arrival of each letter.)

Q. Can you tell me a little bit about your history with letters?

A. I’ve always written a lot of letters. In 1995, my girlfriend went traveling around Europe and I started sending her these 20, 30 pages handwritten letters. They’d be waiting for her poste restante, when she arrived in the town. I’ve always been addicted to it. When she and I broke up, I started typing and sending letters to 10 or 12 people who didn’t know each other. I would send the same letter to multiple people, changing it slightly. I needed to write letters.

An email felt different, it didn’t feel right. When you write a letter, it’s such an incredibly personal exchange between two people. It’s really intimate, even if you’re writing a letter to 2,000 people, which is what we are doing. The person gets your letter and opens it and reads it and takes time with it. You never do that with an email.

Q. How can these letters be intimate when you are writing to strangers?

A. A big part of it is in the skill of the writer. It’s a creative dilemma. But a skilled writer can get past that. I do it all the time in my Daily Rumpus emails. I feel like I’m being very intimate. I’m not thinking, this is going out to 2,000 people, I’m thinking I’m writing my letter to somebody, to some ideal version of what I want that day. That person changes.

I could be writing to someone I already know who's on the email list, and I’m imagining them reading the letter. Sometimes, when I’m lonely, I’m writing to the idealized person who I wish was there. It’s not a real person, it’s a fictional person, but it’s still a person.

Q. Did you think people would be receptive to Letters In The Mail?

A. I did not, in a million years, imagine the kind of reception it’s gotten. Clearly, we hit some nerve. I had this idea on a Monday, I was still thinking about it on Tuesday morning and so I launched it. And it was immediate – we had 200 subscribers in the first couple of hours. Since then I’ve theorized why. It’s novelty and nostalgia. For older people, you miss getting letters. For the younger people, who never had the experience of receiving letters in the mail, it’s novelty. It’s like this is an entirely new way of publishing something, based on the oldest possible way of publishing something.

Q. You said you got a lot of responses to the letter you wrote. What did people write back?

A. I wrote the first letter. It went out to 600 people and I got 50 responses. They often tell you about their lives. It’s a stream of consciousness. I just want you to know I got your letter, and I’ve been fighting with my dad. They go off down this rabbit hole. They’re getting something creative and they’re connecting with it, and it’s making them feel creative and they want to be creative back. I’ve always thought of writing as communication. From the earliest time, and I started writing very young, it was always to communicate. I’ve never written for any other reason.

Q. Who would you ideally want to write for Letters In The Mail?

A. Great writers write great letters. Look at Rilke and Nelson Algeron and Simone de Beauvoir. I’d want a letter from Kerouac. That guy was a letter writer. His letters are off the hook. I’d want a letter from Dean Moriarty. His letters are amazing. He never made it as writer, but the letters that he wrote with Kerouac and Burroughs are just incredible. He was the best letter writer of that group. Bukowski wrote really good letters.

It’s a poetic form. I think of letters as being vey closely related to poetry. When I’m writing the Daily Rumpus emails, I'm often writing it like a poem. It’s rhythmic. I’m excited about Dave Eggers' letter, I think he’s a beautiful writer. I wonder what Malcolm Gladwell would do. Nobody has said no.

Q. Do you edit the letters before they are sent out?

A. A lot of the writers need a little bit of guidance. I might send the letter back and say you have to remember that you are communicating with somebody. You’re talking intimately to somebody. This is an essay, not a letter. It might be a well-written essay, but that doesn’t make it a letter. The epistolary form is a really creative form, and writers are excited about doing it. It’s a funny thing you know, on the one hand it’s a letter, on the other hand it’s a publication. It’s not exactly a letter. But it’s closer to a letter than it is to anything else.

Q. Who should subscribe to Letters in the Mail?

A. Literary writing can be divided into two types. One type is the protagonist author type, which is often a lot closer to the reader, much more of a connection. Think memoirs, but also novels like On The Road, The Bell Jar, books by Joan Didion, and all of what we think of as the American classics, they’re all protagonist author novels. But the best-selling novels are not protagonist author novels. The best-selling novels are story stories, like The Time Traveler's Wife. Do you know the name of that author? No. But The Time Traveler's Wife sold much more than A Heartbreaking Work of Staggering Genius. But you know the name of that author right? So why is that? The biggest selling books are very rarely protagonist author books. People read those types of books for different reasons. People who don’t enjoy a novel where the author is present will probably not enjoy the letters as much. But if you enjoy protagonist fiction or memoir, if one of the reason you read is to connect, then you’ll probably enjoy Letters In The Mail. But if you read for escape, if you don’t like to connect, and don’t like to feel the presence of the author when you're reading something creatively, you probably won't like it.

Q. I was reminded of this poem about a letter, by Tomas Transtromer. Here's an excerpt about the staying power of letters:

In the bottom drawer of my desk I found a letter that first arrived twenty-
six years ago. A letter in panic, and it's still breathing when it arrives the
second time.

What is the impact of having letters in a physical form, compared to reading things on the web?

A. When you sit down to write a letter, you really think about it. When I used to write letters, I would go to a café, sit there all day. When I receive a letter, I wouldn’t just open it, I'd sit down, get a coffee, get everything ready so I could really experience it. When you’re on the computer, you’re never fully paying attention, you’re jumping around. With a letter, you walk away from everything. You open it and read it. It’s just you and the letter. It’s an entirely different experience.