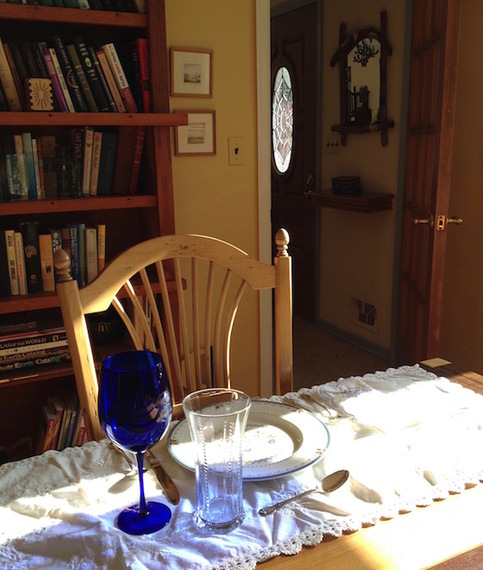 At 4 in the afternoon, the aromas of Italian food began wafting up the Brooklyn street where I lived. Manicotti, eggplant parmigiana, meatballs with a thick red gravy - my brother and I grew up craving these far more than the blintzes, kasha varnishkas, kreplach and pot roast our mother and grandmothers were cooking.

My family didn't go to shule or light the yahrzeit, but they were religious about cooking latkes at Hanukkah, hamantaschen for Purim and all the foods of Passover. My own personal favorites were matzo brei and charoset.

When I began dating the man who is now my husband he expected my family to have a seder. A died-in-the-wool atheist, my husband's Lutheran parents sent him to Sunday school where he learned far more about Judaism than I ever learned in my secular upbringing. When my mother and aunt learned of his interest in Passover, they kvelled -- and made reservations for an Italian restaurant, where my husband spent his first Passover with my family eating linguine with clam sauce.

When he expressed disappointment, my mother and aunt began planning our first real seder. Sure, they had always made chicken soup with knaidlach, and my mother shopped for the pike and carp for her gefilte fish in Borough Park. We used the sweet Jewish wine to pour over our fruit salad, and had a collection of recipes for flourless cakes. But our family had never owned a haggadah, so they picked up eight copies published by a matzo company. We had a stash of yarmulkes that had been giveaways at funerals.

My uncle, the resident Hebrew reader, was elected to conduct the seder. My family followed the instructions on what to do but my husband, who'd studied it with the Lutherans, just knew. My father and aunt were sipping Elijah's wine and nibbling his matzo -- the aromas coming from my grandmother's brisket were making all of us pretty hungry. My husband scolded us for not taking it seriously.

Sure enough, by the time we had two sons, it was my husband conducting our family seder. Soon I developed my own tradition which I called a Pagan seder -- the egg on the seder plate was a symbol of rebirth, also used for Easter. The bitter herbs were a sign of spring, also rebirth. Instead of reading from the Haggadah, we read Martin Luther King's "I Have a Dream" speech. We were raising ours sons to learn about all religions and understand the commonalities. Over the years, our seder took many forms. We were invited to friends' seders, and we attended one at a Unitarian congregation. Then the boys grew up, moved far away, and went on to develop their own traditions. By the time my parents moved to Florida, it was only about every third year we spent Passover with them.

My brother had grown into an Italian. All his friends were Italian, he still lives in an Italian neighborhood and you can almost hear his Italian accent. Every Sunday he cooks a thick red gravy. He calls his pasta macaroni. His salads include tomato, mozzarella and basil. Despite their hectic lives, his grown children come to Sunday dinner religiously.

My father, who became more and more of a devout atheist toward the end of his life, told the hospice chaplain he did not want to see a rabbi, there was nothing a rabbi could do for him. He told the chaplain he didn't want anyone proselytizing to him, and then proselytized to her about how all the world's ills were caused by people's religious beliefs. My mother went along.

As my mother lay dying, for the first time in my life I began having a strong desire to attend a seder. A friend of my mother's, a woman in her 80s, was having 100 people for Passover. Surely I could show up, uninvited, and be welcomed. I could sit at Elijah's place.

But I stayed with my mother in the hospital. She, too, had a hankering for something Passover, even though she could no longer eat solid foods. I guess there's something in us, though we're not religious, that craves the connection to our roots through the food that we make. I told my mother I would make matzoh ball soup and bring it to the hospital. She insisted I use the matzoh balls in her freezer from Costco which, she said, were the best.

Anything to please. My mother invited her doctor to join us for the matzoh ball soup. I brought fine china and silver and set up a small tablecloth on the hospital cart. In the end, the doctor wouldn't eat the Costco matzoh balls because they weren't kosher.

My mother convinced the doctor to let her go home, and my brother cooked lamb for her that night. It wasn't a seder, but it was her Last Supper. My mother, who hadn't eaten in weeks, ate the lamb with gusto. She died a week later, on Easter Sunday.

A year later, I found myself hankering for charoset, for the seder plate and its symbols. I suddenly understood why so many celebrate Passover today -- it is a chance to gather with family, to clean the house, to set the table with the fine linens and china and silver handed down from beloved ancestors, to cook up sumptuous foods whose aromas filled the kitchen as we sat and told stories, greatly exaggerated, from long ago.

My own children were too far flung to attend, but my brother and his family comprised a pre-packaged guest list. My nieces and nephew were eager to learn about a part of their heritage, and my brother and sister-in-law brought Italian food.

And I suddenly understood why we set the table for Elijah. Elijah's place setting welcomes the spirits of our ancestors who made this meal possible. We are pouring the wine for my mother, whose recipe I use for the charoset, and whose traditions we follow. The spirit of my mother, who ate her last supper on Passover, is passing over -- we opened the windows and door to let her in.

Letting Elijah In For Passover
8 Guidelines For Stress-Free Aging