Another light has gone out in the acting world. Jean Stapleton died in New York City on May 31 at age 90 of natural causes. Stapleton, despite her long and varied acting career, was best known for her iconic role of Edith Bunker in "All in the Family," the popular and pioneering '70s comedy.

At the height of her popularity, in 1973, she wrote this column for Guideposts magazine about overcoming her own Archie Bunker problem, that of prejudice. 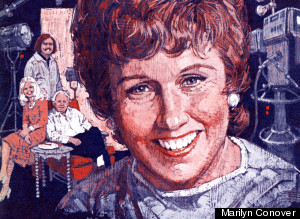 When I was growing up in New York City, there was one thing that I disliked with a passion and that was calf's liver. My father, an outdoor advertising salesman, loved calf's liver, and so my mother saw to it that it often appeared on our dinner table. I would rather go hungry -- and often did -- than eat it.

The interesting thing is, I never even tasted calf's liver until I was an adult. I simply disliked the looks of it and knew, beyond all argument, that I would despise it. Today, I adore calf's liver.

It wouldn't surprise me at all if Archie Bunker hated calf's liver. If you know Archie from "All In The Family," the television comedy series in which I play his dingbat wife Edith, then you know what I mean.

Archie's a bigot, a super bigot, and we get most of our laughs from his outrageous points of view, his rantings against other races and almost anything new or strange to him.

If it's true that the bravest man who ever lived was the first fellow to eat an oyster, you have some idea of where Archie would rate for courage -- and how he'd camouflage his fear with a loud tirade.

By being extreme, and therefore ridiculous and funny to us, Archie has made millions of people aware of the absurdity of prejudice. I have confessed to my own absurd dealings with liver because it points up something that I was aware of long before Archie came along: Prejudice is an assortment of deceptively small personal judgments -- deceptive because of their great cost in our daily lives.

No one will ever know, for example, how many families have been racked by stubborn arguments over long hair. Is prejudice involved? Partly, I think, for at its root, prejudice is a matter of judging -- of prejudging really.

We have preconceived opinions that long hair means something about a boy (and therefore about ourselves, since he is our offspring) that may or may not be true.

For myself, I have seen how my own niggling, personal prejudgments often have robbed me of pleasure and peace of mind. There have been times when I have tried to cure these prejudices, and I recall one time in particular when a conscious effort at healing resulted in a crucial breakthrough in my acting career.

It happened a long time ago, in the late '40s, after a good many bleak years trying to crack Broadway. Those had been years of constant work, of having a job as a secretary in the shipping department of a railroad company by day; typing manuscripts late at night in exchange for drama lessons; begging time off for summer stock; making precious little progress.

Then one day the chance came to read for one of the Equity Library Theatre productions -- shows that our actors union puts on to give us a chance to work and to be seen. The play was "The Corn Is Green," and there were two roles in it I felt confident I could handle.

One of them was so miniscule, however, that though I knew it meant a job, there was some doubt as to whether it would be a good showcase. Naturally the tiny part was the one I was offered.

I thought about it a while. "I'll do it," I said finally, irritated that they hadn't given me the larger part.

Ten days before the opening, the actress rehearsing Mrs. Watty fell on some ice and broke her leg. I assumed that I would inherit her role and I wasn't surprised when Ted Post, the director, came to talk to me. He asked me if I would fill in until he could get somebody else.

"Somebody else! But what about me?" I protested. "I can play her."

I didn't believe him. He just was not being fair. He had it in for me.

I got angry. I got so mad that I couldn't even sit at the same dinner table with my parents that evening. I had to get up and go to my room and try to collect myself. I had to do something about this injustice or I would burst.

In those days -- as well as today -- I had my own way of finding help when needed. I took out my Bible. After all, I had been going to Sunday school classes in our church since the age of two. And I also took out my concordance, that remarkable compilation of all the key words in the Bible and where they appear.

I flipped through the pages of the concordance to the "Js," mumbling theatrically all the while, "Justice is what I need, justice..." But before I could find "justice" my eyes fell on "judge."

I picked up the Bible and sped to Isaiah. I had explored Scripture in this fashion many times before, sometimes losing myself for hours in random adventure. Now, Chapter 33 -- there it was: "For the Lord is our judge, the Lord is our lawgiver, the Lord is our king; he will save us."

What was this I was asking about justice? Had I jumped to some emotional conclusion about Ted? Should I pray about this and try leaving justice to the Lord?

I prayed; I relinquished the matter to the Highest Power. My anger disappeared. I was back in the dining room for dessert.

The next day at rehearsal I was no longer driven by an ambition to play Mrs. Watty. I read the part as well as I could and enjoyed doing it, and when Ted found somebody he thought was the right age, I retired with genuine grace.

But that wasn't the end of the story. Three nights later the producer called me at home and said that the new Mrs. Watty hadn't worked out. If Ted should ask me, would I be willing to take over? Very quietly I told her I'd be delighted, and the next day Ted said, "You're too young for it, Jean, but the part's yours."

It's still not the end of the story. Just as all show business sagas ought to unfold, an important agent saw me at the opening. She wasn't fooled by my make-up. She saw me as a young woman, just right, she decided, for the role of the niece in a touring company of "Harvey."

Out of that came my first good job in the theater. I was on my way.

Today, when I get emotional about something I think somebody has done to me, I try to think back to that experience before I start hurling a few hasty, bigoted thunderbolts.

I recall that I never succeeded in changing the director's opinion of me; nor did I change my own opinion. I had simply left the judging to the Lawgiver, and He decided for both of us.

Recently a friend sent me a sermon entitled, "God and Archie Bunker," written by the pastor of the Brentwood Presbyterian Church here in California. In that sermon, Dr. Spencer Marsh Jr., who enjoys Archie, nonetheless noted his self-centeredness, his cliché-ridden bravado, his imprisonment inside his own narrow opinions.

He quoted some dialogue from the show, from the night Archie was talking to "our" son-in-law saying, "I've been making my way in the world for a long time, sonny boy, and one thing I know -- a man better watch out for number one. It's the survival of the fittess."

He sees Archie as the elder brother in Christ's prodigal son parable, the one who stands outside the house grumbling about his rights while the welcome-home party is going on inside. The walls that separate him from the party are self-imposed, self-righteous, judgmental ones.

And poor Archie, like a lot of us, never listens, never learns. He'll never know that by blindly pushing away the oyster, he might be missing its pearl.