Members of the U.S. women's soccer team and a coalition of over 60 female international soccer stars recently dropped their lawsuit alleging discrimination at the Women's World Cup in Canada, because female teams are expected to play on inferior artificial turf fields, while men's World Cups, in contrast, are always played on natural grass. In fact, the U.S. converted turf to grass for the 1994 Men's World Cup at FIFA's request. Abby Wambach and Alex Morgan, among other revered players, brought the complaint because they believed that playing on artificial turf can lead to more injuries and potentially threaten long-term health. 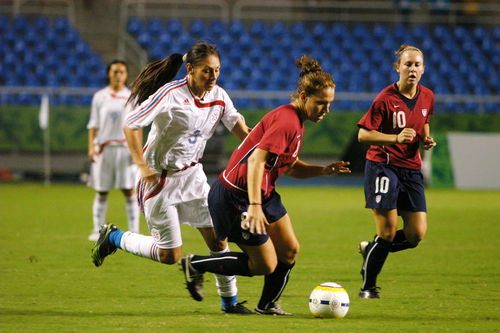 While a number of factors led the team members to withdraw the complaint, extremely troubling is the fact that several players expressed fear of reprisals from FIFA and other groups for protesting the unequal treatment of female players. Specifically, lawyers for Teresa Noyola of the Mexican team as well as Camille Abily and Elise Bussaglia of the French team stated that the women believed they had been threatened for proceeding with the turf lawsuit. Noyola, despite playing in the game securing Mexico's place in the World Cup, asserted she was told her place on the Mexican team could be jeopardized if she did not withdraw her name from the legal challenge. Abily and Bussaglia feared FIFA would not award the next Women's World Cup to France, due to their involvement in the suit. Lawyers for the three players stated that the players withdrew from the action along with two Costa Rican players due to concerns about retaliation.

If powerful, accomplished female athletes such as Wambach and Morgan and their international counterparts are not able to achieve equity in playing conditions (not to mention pay), how can girls in local public schools (such as the 3,267,664 playing high school sports as of 2012-13) experience and advocate for equity on their own soccer and softball fields, where they have less leverage and fewer resources?

Like the women who feared being retaliated against for complaining about discrimination at the World Cup, every day female student-athletes in the U.S. are afraid to speak up about unfair treatment because of the reprisals they face for demanding equity. In our Title IX work with Fair Play for Girls in Sports, we often find that female students are subject to retaliation ranging from increased disciplinary measures to termination of supportive coaches and other staff when girls or advocates raise issues of gender inequality in athletics. Many schools attempt to stamp out and curb complaints by singling out girls, their parents, coaches and other supporters. Thus, female students think twice about coming forward to assert Title IX violations to achieve equity, or never do so. This is not acceptable.

Not only does Title IX -- now nearly 43 years old -- require gender equity in public school athletics, it also clearly prohibits retaliation. In Ollier v. Sweetwater, a U.S. appellate court recently strengthened Title IX's anti-retaliation protections by ruling that a school may not retaliate against female athletes through non-direct means such as by firing the girls' coach as a result of the girls' inequity complaints. This critical decision made clear that chilling the attempts of girls to demand the same amenities and opportunities as boys is not tolerated under the law.

Where girls are getting second-class facilities, fewer chances to play on teams, and inferior athletic benefits (such as tired old uniforms and inexperienced coaches), the need for change is obvious. Yet the worry about being ostracized, mistreated and singled-out for equity demands is also very real. Ollier seeks to change that by ensuring protection for those advocates and girls voicing concerns.

The fact that women at the national-team level participating in the largest women's sporting event in the world (attracting about 13.5 million viewers from the U.S. alone in 2011) feel threatened for requesting equity indicates we have a long way to go to realize full gender equality in sports -- from the school down the block to the stadium at the top. This National Girls and Women in Sports day, let's redouble our commitment to spreading the word about Title IX, including its anti-retaliation protections, address inequities with action, and ensure that female athletes have the chance to participate and excel in athletics. We must work toward true equity so that all can participate on level playing fields, without fear.