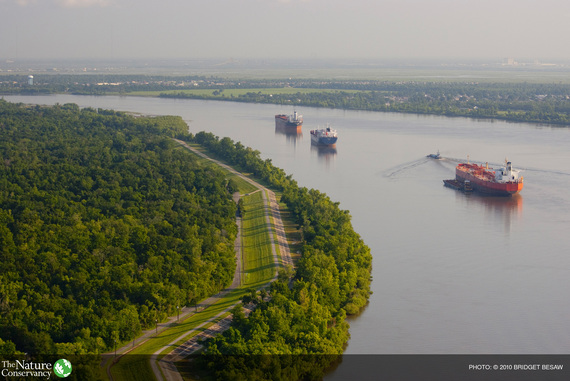 Earth Day was established in the U.S. in response to a horrific oil spill in California, with the goal of raising public awareness on the issues of air and water pollution. Today, nearly fifty years later, it is celebrated by more than a billion people in nearly every country in the world. The growth of this event signals America's leadership in bringing environmental stewardship values to the world.

The U.S. now has a tremendous opportunity to do the same again--this time to tackle pressing issues that transcend national borders and require the cooperation of many countries. We can do this through the Trans-Pacific Partnership (TPP).

Much of the public conversation about the TPP has focused on its ability to open new markets for American products and to improve foreign labor conditions. But the 12-nation agreement also contains the strongest environmental standards of any trade agreement in history, raising the bar across a region representing forty percent of the world's GDP, and countries at varying levels of economic development. And if the scale of this opportunity is not great enough already, TPP also provides a framework for other countries to join, further broadening the opportunity to improve our global environment.

How does the TPP raise environmental standards across the globe? Upon entry-into-force, all TPP countries will be required to effectively enforce their environmental laws, including laws that implement Multilateral Environmental Agreements (MEAs) addressing a range of issues, such as endangered species, wetlands, oceans and fisheries, forests and wildlife, and the ozone. The TPP includes commitments to combat illegal fishing, promote sustainable fisheries management, prohibit some of the most harmful fisheries subsidies, promote the long-term conservation of marine species, and to combat trade in illegal wildlife and timber trafficking.

And maybe even more importantly, the TPP makes all of the environmental commitments enforceable through trade sanctions--a mechanism that is not currently available to environmental organizations, watchdog groups, and progressive governments that want to hold countries accountable to sustainable development.

In short, the TPP has teeth, and for those who recognize that environmental leadership does not begin or end at our shores, this is an historic opportunity to further promote sustainable development and better protect our global ecosystem.

It may not be surprising that organizations like The Nature Conservancy would take note of this opportunity. But why are retailers so inclined? The U.S. retail industry is committed to leading on sustainability--with their trade association, RILA, backing them up with a nearly decade-long sustainability initiative--recognizing their responsibility to improve their environmental impacts both where their consumers consume and where their products are produced. TPP is a critical mechanism to bolster protections in producing countries, and finally bring those governments to the table so that they can play their role in protecting their environment.

Some argue that TPP's environmental standards are not strong enough. For example, while the agreement calls on member governments to promote clean energy development and enhance resilience, it does not include explicit commitments to tackle climate change. While we would have welcomed stronger provisions on this key issue, the groundbreaking Paris Accord commits the same governments to ambitious action on climate change. Some are concerned that provisions for dispute settlement between member governments and private investors could undermine legitimate environmental protections. Yet similar provisions already exist in U.S. trade and investment agreements, and the TPP further tightens their application to prevent abuse. On balance, we believe the TPP moves these causes forward in the right direction and outweighs the potential risks.

And what if TPP is not ratified? Failure to seize on this historic opportunity to export our higher standards and better stewardship of our planet would cost us now and in the future. We would lose a valuable opportunity to provide stronger environmental enforcement mechanisms in the places that need them the most, and we'd risk forfeiting our environmental and economic leadership role in the fastest growing region of the world. If we give up the driver's seat, we open the door for China, through its own trade policies in the region, to set the bar for environmental values that will shape the entire region for decades to come.

The U.S. should not abdicate this role. We should seize this moment--as we did on the first Earth Day--and proudly lead efforts to strengthen global policies dedicated to sustainable development. If enacted, TPP will serve as the precedent for future trade deals written around the world, ensuring that those deals include policies that promote sustainability and environmental protection.

As we celebrate Earth Day and contemplate the future of our planet, we urge members of the United States Congress to take these environmental benefits into account as they consider whether to ratify the Trans-Pacific Partnership.