Aron, 36, admitted to the packed Brooklyn courtroom that he snatched Kletzky from a Borough Park street last July, eventually cutting up his body and putting parts of it in his freezer. The boy's disappearance sparked an intensive three-day search, with his picture posted throughout the city.

"I panicked," Aron said when asked by Judge Neil Firetog why he killed Kletzky.

Wearing a bright orange jumpsuit and a black kippah, Aron, a hardware store clerk, answered most of Firetog’s questions with a simple "yes." He agreed with Firetog that he found Leiby on 15th Avenue in Brooklyn and took the young boy to a wedding upstate before bringing him back to his apartment. Leiby remained there alone while Aron was at work for a day.

But after after seeing the neighborhood search for the missing boy, Aron drugged Leiby and smothered him with a bath towel in a panic, he told the judge.

When asked what he did next, Aron told the court he “disposed the body.”

"I put it in a suitcase," Aron said after his defense attorneys encouraged him to speak louder, one hugging him on the shoulder.

Police tracked down Aron two days after Leiby disappeared using surveillance footage of a man, believed to be Aron, following the boy before he was taken. When they arrived at his apartment, Aron pointed to his freezer, where police found Leiby's feet, bloody knives and a carving board. His legs were also dismembered, found with the rest of his body in a red suitcase tossed into a dumpster a few blocks from the apartment.

"In order to put it in the suitcase you had to cut the body?" Firetog asked, peering at Aron intently over horn-rimmed glasses.

As part of the plea agreement, Aron will serve 40 years to life in prison with the possibility of parole.

Though Kings County District Attorney Charles Hynes said in a statement last August that there were "no circumstances which would lead me to accept a plea bargain,” the deal was reached after Leiby’s parents told the prosecutors they wanted to avoid a trial.

"We want to thank D.A. Hynes and his team for bringing this to a quick resolution as we requested -- for not forcing us to relive the terror that began when Leiby went missing," Leiby’s father Nachman Kletzky said in a statement read by state Assemblyman Dov Hikind (D-Brooklyn) after the proceeding.

"Those three days of uncertainty were unbearable, but our community led a tireless search and allowed us the comfort of at least knowing the truth of our child’s fate," the statement continued.

Aron's lawyers in the past maintained they would pursue an insanity defense, but Firetog noted in court that the defendant had recieved a psychological evaluation that would make pursuing such a defense difficult.

During the hearing, Aron spoke only briefly and his lawyers often had to prompt him to answer the judge. But his lawyers said he was aware of the nature of his crime and his plea deal.

"He’s well aware of what the charges are against him and what he’s done," defense attorney Jennifer McCann said. "He’s unable to really express his emotions the way you and I would understand it."

When asked if they pitied their client, his three lawyers blanched.

"Is there anyone here who doesn’t?" attorney Pierre Bazile asked.

Aron is expected to be sentenced Aug. 29. 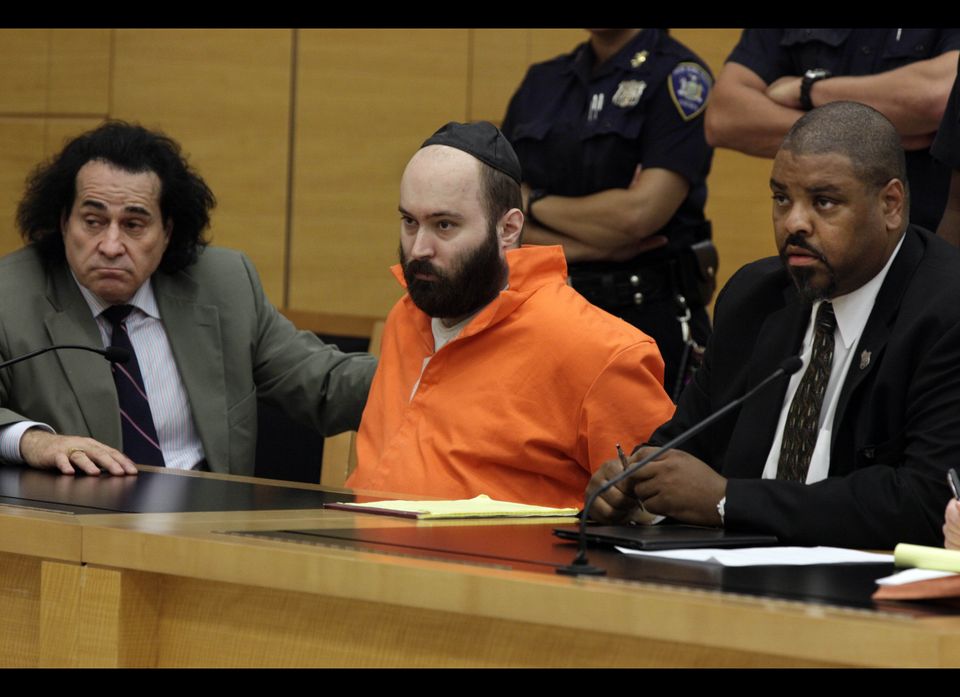 1 / 16
Levi Aron, Howard Greenberg, Pierre Bazile,
Levi Aron, center, listens to a plea hearing with his attorneys Howard Greenberg, left, and Pierre Bazile, in Brooklyn Supreme Court Aug. 9. Aron pleaded guilty to charges he abducted and dismembered Leiby Kletzky, an 8-year-old boy who became lost in Brooklyn after leaving a day camp. The plea will result in a sentence of 40 years to life in prison. (AP Photo/Richard Drew, Pool)
AP