Way back in the summer of 2009, Levi Johnston -- the estranged paramour of Sarah Palin's daughter, Bristol -- was said (by "Tank," his "bodyguard/publicist!") to be "shopping a book" of the tell-all variety, about his days and nights in the company of the Palin family. A Vanity Fair piece later that fall offered a taste of what might be on the way. But by the following summer, Levi was in he midst of a reconciliation attempt with Bristol, and he was walking back his previous bluster, telling People magazine, "Last year, after Bristol and I broke up, I was unhappy and a little angry. Unfortunately, against my better judgment, I publicly said things about the Palins that were not completely true."

Of course we all know how that played out: Bristol and Levi hit the skids again and soon, he was walking back the walk back: "The only thing I wish I wouldn't have done is put out that apology 'cause it kind of makes me sound like a liar."

Ha, kind of! But now, the plans for that tell-all book -- titled Deer In The Headlights: My Life In Sarah Palin's Crosshairs -- are back on. Just how seriously should we take it? I basically think the cover says it all: 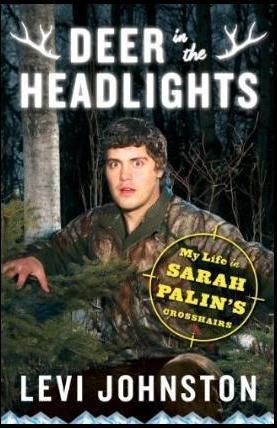 Of course, if Levi is willing to indulge the wild fantasies of the Trig Truthers, this book will probably sell like hotcakes.