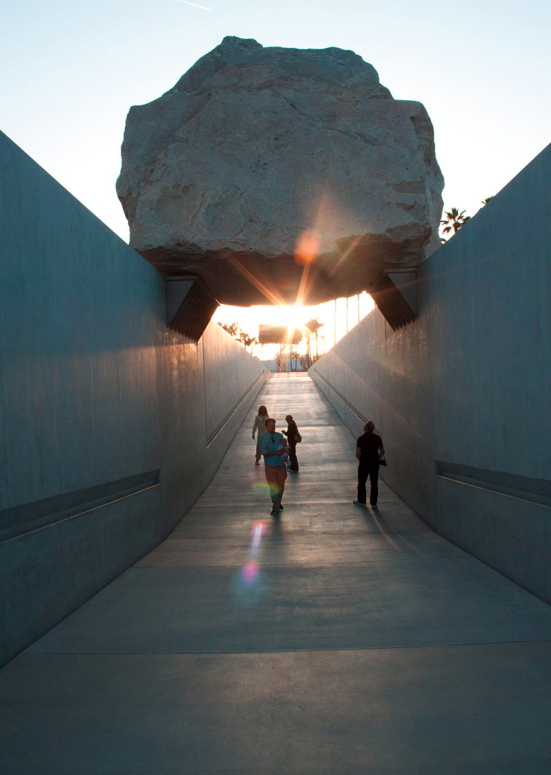 In the media blitz last year over Michael Heizer's 340-ton rock fragment sculpture (Levitated Mass), clichés never had it so good. Journalists just couldn't resist:
"Art is in the Eye of the Boulder," "There is a New Rock Star in L.A.," "Rock of Ages," "I Am a Rock, I Am an Island."

So where to begin?

Full disclosure: I am a rock-loving art critic from the east who got to the rock debut at the Los Angeles County Museum of Art thirteen months late. Last week, I was on the panel of an aesthetics symposium the day after my encounter with Levitated Mass and remember remarking to one of my colleagues from L.A. that I had just spent a whole day with the rock. His face had inscrutibility written all over it as he said, "It took you all day to see that rock?!" I thought I was just playing the role of a good pilgrim.

First, for those who may not have tuned in to the story, here is a summary:
Last year, Levitated Mass was finally transformed from a 1969 Michael Heizer sketch into a sculpture on the grounds of the Los Angeles County Museum of Art. The concept was realized through a partnership between LACMA's Chief Executive Officer, Michael Govan and artist Michael Heizer.

Govan played a role beyond the typical administrator. He did more than just make space for Heizer's 340-ton rock onto museum grounds. Govan promoted Heizer's vision, worked with museum board of directors to raise funds from private donors, and visited the quarry for promotional video-ops with the rock. He helped Heizer tangle with the skeptics--with Cristo/Jeanne-Claude like fervor--in getting municipal transportation permits and in getting permission to take down power lines, stop lights, etc. to let the truck pass through municipalities on the trip to the museum.

Levitated Mass is in a rare big league of rock moving. Blocks in the Egyptian pyramids at about 2.5 tons are 140 times smaller than Heizer's granite. Stonehenge is more comparable, at about 250 tons each and moved (by some estimates) 160 miles. The 110 billion people who have inhabited earth have moved a lot of rock around, but almost never as such large pieces. The 10 million dollar Heizer project moved the 340-ton quarry boulder 105 miles by a special 196-wheeled transport to the Los Angeles County Museum of Art. As a football-field long centipede, this contraption inched the rock along to its destination for eleven nights.

Heizer is infamously closed-mouthed about his art. In a National Public Radio interview shortly before the install, he spoke cautiously about the boulder explaining that he liked the rock as a "specimen" because it had no blast fissures. But when pressed to explain more, the artist said, "I am not big on talking about art." So Michael Govan took up the slack as the main public spokesman. In the same NPR interview, Govan foretold of the magic of the piece. Speaking of a descending ramp that the boulder would be perched upon, he told potential spectators, "You will be able to walk down under it. As you walk under it that rock bottom moves up and you will feel the sense of a huge monolith that's kind of levitated."

Once installed Levitated Mass produced its share of viewers crying foul on the promised levitation. (See the digital commons for details).

So, finally, what I saw: Through most of the day I liked the rock well enough--the two stories of perched granite with a full narrative structure, geologic time contained, and the Stanley Kubric exhibition inside the museum offering a contrasting monolith. Observing the observers was enlightening--from the folks of the "biggest embarrassment in L.A." persuasion to the five year old who walked down the ramp ahead of his parents and then asked me "is this the biggest rock in the world?" Not much new to report there.

But something extraordinary occurred at sunset. For starters, everyone present became believers. Unlike any other time of day--some even took to lying down in the trench. As I faced due west on that spring day, the sun dropped directly behind the rock to be perfectly eclipsed. The sun then reappeared as it dropped into the slot of the ramped space directly below the monolith. As we walked down the ramp in these final minutes of sunset, two relative motions intersected: the sun dropped and the rock rose. Thus, the seemingly grand narrative of moving the rock was, in the end, just a blip in the bigger story that points to sublime space, celestial movement and geologic time. And that, to my way of thinking, rises above cliché.

ARTPULSE LINK to other recent articles by Stephen Knudsen:
http://artpulsemagazine.com/tag/stephen-knudsen