A levitating magician shocked Londoners when he appeared to float alongside a double-decker bus, but online sleuths think they have figured out his trick.

Dynamo, a 30-year-old British illusionist named Steven Frayne, stunned onlookers Sunday as he seemingly levitated in the air while leaning on the side of a 543 bus, according to the Independent. The act was performed as part of a promotional launch for Pepsi Max's #LiveForNow campaign.

The stunt certainly managed to create a buzz. On the street, some chased the bus to record the act with their phones, while others simply stared in amazement, according to ABC News. Many took to Twitter to discuss the gravity-defying feat.

Dynamo might have managed to shock bystanders, but online sleuths think they cracked the code.

News.au reported Wednesday that readers took to the site's official Facebook page to discuss the levitation and boiled the trick down to a fake arm.

German performance artist Johan Lorbeer has performed a similar levitation stunt -- standing in mid-air with his arm outstretched, hand touching a flat surface -- in countries such as Egypt, France and Spain, the Telegraph notes. A photograph from one of his Egypt performances shows a prosthetic arm attached to a metal bar and an apparatus for the body.

"To present that illusion in a urban environment like that is incredibly challenging, especially on the side of a moving bus. It really pushes the boundaries," he told the Telegraph. "It was probably incredibly dangerous, he's got a lot of guts."

Pepsi explained the campaign in an April 2012 news release sent to ABC News, saying the marketing push would “invite and inspire Pepsi fans to live each moment to the fullest through a breadth of global, pop-culture platforms, including relationships with music and entertainment brand evangelists, digital innovation, epic events and unique partnerships.”

Alas, a magician never pulls back the curtain, and Frayne hasn't revealed how exactly he did it. Season 3 of "Dynamo: Magician Impossible" is set to premiere July 15 on the Watch Channel. 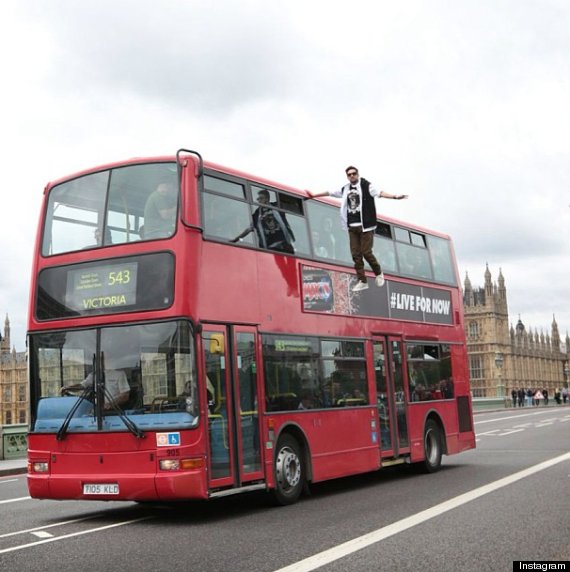