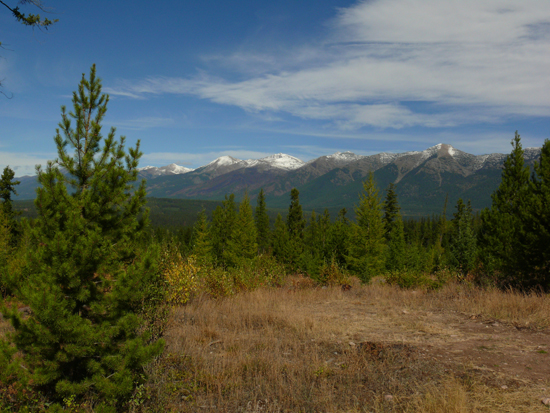 Were Meriwether Louis and William Clark to return today and retrace the steps of their famed early 19th century voyage of continental discovery, there is only one place in the lower 48 United States left they would recognize as ecologically intact -- where all the animals that they saw, described, shot and ate some 200 years ago still abound. It's called the Crown of the Continent -- and I live on its border.

Now the future of the Crown may finally be secure, through a last-minute agreement this week by two environmental organizations (The Nature Conservancy and Nature Conservancy of Canada) to help the British Columbia government pay coal and gold mining companies to walk away from their leases there. The $10 million deal was a bargain -- and it came not a moment too soon.

The Crown is about as close to true wilderness as I have seen on any continent. It's nestled on the northwestern edge of Montana, abutting Canada, and follows the mountainous spine (or crown) of the continent. Elk, mountain goats, wolves and grizzly bears are plentiful here, but it's really the elusive lynx and the wolverine -- species that I have seen just once in all my time hiking around wild places -- that makes this place truly remarkable. Through it all runs the Flathead River, its north Fork beginning 50 miles north of the border in Canada. The river runs steadily south, gathering tributaries along the way, and defines the western border of Glacier National Park. By the time it enters the broad Flathead valley and loses itself within the embrace of a gigantic lake, its milky glacial waters have been enjoyed by wildlife, farmers, and recreating celebrities alike.

Worldwide, rivers are in serious trouble. Growing cities and human activity are putting enormous and accelerating pressure on rivers' capacity to deliver their many ecological benefits. So far, the North Fork of the Flathead River has largely escaped this fate, unencumbered by dams or pollution. Native fish, including the massive bull trout, ply this cold, clear waterway. But despite the river's significance, potential development makes it the one weak link in the long-term conservation of the Crown.

The threat to the Flathead comes from the steadily rising price of minerals and metals. Its headwaters' area contains significant coal deposits -- enough to extract 2 million tons of material per year for decades, with markets (such as China) hungry enough to pay top price for it. And if the prospect of coal mining gashing this paradise weren't worrisome enough, gold mining also looms. Mining companies in Canada have sunk money into developing and exploring claims that, if fully exploited, could significantly threaten the quality of the water and the intactness of the Crown. The threat has been on the table for some years, but market conditions are increasing the momentum to mine -- and environmentalists have been relatively powerless to intervene.

This week, a minor (and some would argue major) miracle happened. Montana Governor Brian Schweitzer and British Columbia Premier Gordon Campbell had announced almost a year ago that they would each withdraw mineral rights that impact the Flathead on both sides of the border. (As part of last week's deal, Premier Campbell announced legislation to make that withdrawal permanent.) On the U.S. side, Senators John Tester and Max Baucus secured the voluntary release of mineral leases from the leaseholders. The only step left? On the Canadian side, where more valuable deposits exist, the mining companies that had sunk money into the development of their claims had to be compensated for those investments.

With bi-national cooperation between governments and agreeable mining companies willing to forgo their leases for the simple reimbursement of costs, all the pieces to secure the headwaters of the Flathead River had suddenly fallen into place -- if someone could act quickly to come up with $10 million so the mining companies would walk away. Speed was critical: Coal and gold are not getting cheaper, and both Premier Campbell and Governor Schweitzer are leaving office soon.

Two non-profit organizations -- one on each side of the border, fittingly -- stepped up to the challenge. With The Nature Conservancy and Nature Conservancy of Canada each agreeing to put up half the amount due, the fate of the Flathead River, so long in the balance, has suddenly and dramatically been determined.

Some might argue that $10 million in donated money is too much to hand over to mining companies. Some might claim the area should simply be designated a National Park and put out of reach. To make those arguments is to privilege the perfect over the good -- and ignores the willingness of people to work together to solve problems like saving the Crown. Here, government set the stage, private industry proved willing, and non-profits stepped in to remove the last logjam. The process was one of compromise, but the result proved definitive.

When I fish the Flathead River this summer, the fish I will most frequently catch is the Westslope cutthroat trout -- whose scientific name, Oncorhynchus clarkii lewis, derives from Lewis and Clark. They first described this fish while traversing Montana. Today, it and the other species that inhabit the river -- along with the surrounding lands of the Crown -- stand a fighting chance of remaining as the explorers found them. Lewis and Clark would probably agree: $10 million dollars to secure such an intact landscape, where people and nature have found a way to make room for one another, is a bargain.